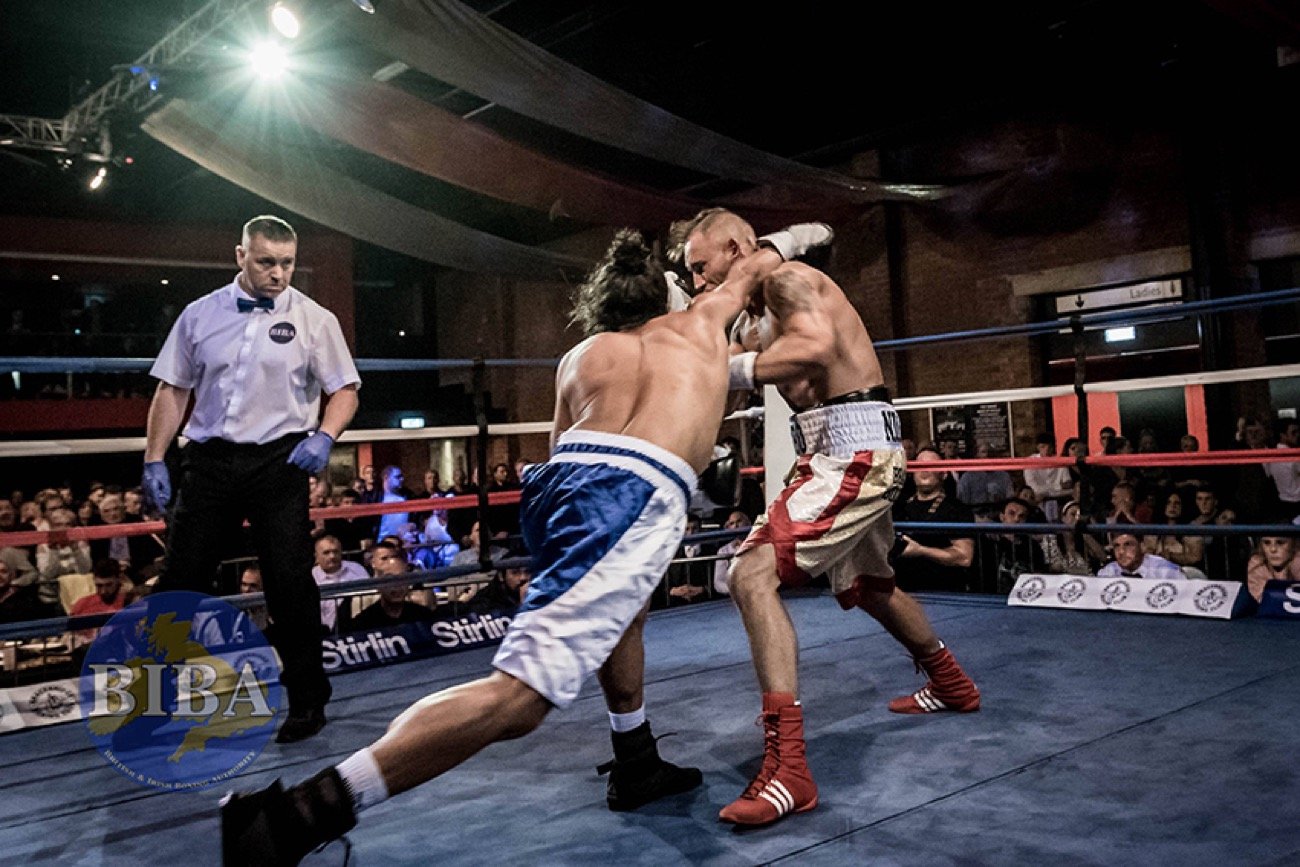 On Saturday night, at the Engine Room at Lincoln University, the local fans turned out in force to support local lad Nathan Decastro in his defence of the World Boxing Union (WBU) Super Middleweight World title he’s held since April as well as attempt to add the World Boxing Foundation (WBF) Crown to his collection against late replacement Fernando Castaneda from Mexico.

Originally Decastro was due to face Nicaraguan Jose Varela, however on Wednesday Varela, who was in Spain at the time, was refused an exit visa by the Spanish Authorities when he arrived at Barcelona Airport for his flight to the United Kingdom, so was unable to make the trip to Lincoln.

The fight itself was quite a messy affair, due to Castaneda’s continual holding, following Decastro landing a vicious body shot early on in the first that clearly was affecting the Mexican, as each time Decastro came forward and let rip he’d grab hold to prevent further punishment to the body.

Rounds two and three were in similar vein although to be fair there was a bit more boxing, rather than wrestling, action. Decastro worked the body of his foe whenever he got the opportunity, which wasn’t that often due to the Mexican’s tactics of hit and hold.

Round four was far more open following referee Lee Murtagh having stern words with Castaneda about the holding, so much so there were a few venomous exchanges that followed, however each time Decastro targeted the body Castaneda would still initially grab hold, so Decastro began firing exocets to the head.

Decastro clearly had enough of being frustrated by Castaneda’s tactics as the fifth stanza began, the Bardney man changed tactics slightly and began to go forward far more as well as quicker and land some serious shots in the first minute or so, Castaneda responded in kind but quite ineffectively due to his determination to protect his body from further punishment by keeping his distance.

About half way through the round Decastro backed the Mexican toward the rope and feigned a jab, causing Castaneda to raise his hands just enough to create an opening and let rip with a massive hook to the body that sent the Mexican to the canvas doubled up in pain.

Castaneda initially tried to rise, but immediately collapsed and writhed in pain, Referee Lee Murtagh immediately waived the fight off and summoned the doctor to the ring as Decastro and his team began their celebrations. Official time of stoppage one minute and thirty eight seconds of the fifth round.

Prior to Decastro-Castaneda see Sophie Varley in action against Jaime Bates for the Professional Boxing Council (PBC) International Bronze Championship.

Have to say this was a cracking fight from start to finish, the two girls fought hard for the entire two minutes of every single round. Varley landing some seriously big shots, including one in the sixth that shook Bates to the core, her legs were gone but somehow she managed to not just stay on her feet but was savvy enough to give herself a few seconds to recover her composure by hanging out a jab to keep Varley at bay.

Each round was all action and seriously close, so much so that I couldn’t split them, score wise, on a few of the rounds and each to my mind had secured a couple of rounds and have to admit I thought that the result would be a draw, I was wrong (I’m clearly not Judge material) as the three experienced judges scorecards read; Adrian Thorne 57-59, James Ancliff 57-58 and Graeme Beauly 56-59 all in favour of Jaime Bates.

Prior to Varley-Bates was another cracking fight between Sheffield’s debuting Zac Lane and Nicaraguan Frederick Castro.

The clash in styles was what really made this fight, Castro has a distinct forward coming all out attack style, whilst Layne’s emulates the style of Prince Naseem, and boy oh boy the youngster made this style his own, dipping and swaying out of danger before throwing stinging counters each time the Nicaraguan attacked. Saying that I should stress Layne isn’t one dimensional at all, when needed he was more than happy to go toe-to-toe, letting rip with extremely fast and powerful lefts and rights.

It was great fight to watch, close and all action throughout. After four fantastic rounds Referee Lee Murtagh scored the contest 39-37 in favour of the Debuting Zac Layne, much to the annoyance of Castro and his corner who surrounded the referee disputing the score, which I fully understand as he was the most aggressive but have to say Layne neutralised the Mexican’s attacks with ease and his countering was sensational and to my view had done more than enough to secure the victory.

Prior to Layne versus Castro was another all action thriller, the time between two unbeaten fighters Sugar Atahasan from the Turkish Republic of Cyprus against Leeds’ Jack Jones.

Atahasan dominated the first stanza utilising his reach advantage to extremely good effect. However he didn’t have it all his own way especially as the fight progressed into the second as Jones patiently worked away fashioning openings before letting rip with big shots to the body and head of Atahasan.

Atahasan stepped up a gear and really went for it in the third, and as in the first dominated proceedings. Much of the same in the fourth, well until about midway through when Jones took advantage of a defensive error by Atahasan and landing a peach of a shot that sent the Turkish Cypriot to the canvas. Atahasan barely touched down and was on his feet in an instant and on the restart went in hard and fast though to the end of the round.

The fourth contest of the night pitted Orkney based Liverpudlian Paul Peers against Tanzania’s Amos Mwamakula in a four rounder.

Again what a fantastic all action war, Peers went in hard and fast and kept piling on the pressure with massive shots to body and head for the entire first round, Mwamakula is as clearly as tough as they come to withstand the intense powerful attacks from Peers.

The second was slightly less intense, as Peers elected to switch tactics slightly, slowing the pace and picking his shots. Much the same in the third, but in the fourth Peers stepped up the pace a little and as in the first targeted the seriously tough Tanzanian’s body.

Prior to Peers vs Mwamakula was a heavyweight contest between Barrow-in-Furness’ Lee Kellett and Lithuania’s Tomas Vaicickas.

Again this was a full on war, with both men going full out for much of the contest. Kellet’s performance was the best I’ve seen from him in quite a while, he looked confident and really was putting so much power behind his shots.

Vaicickas is as tough as they come and happily absorbed the big shots coming his way from the Barrow man before countering style. Whilst Kellet dominated the first coupe of rounds, Vaicickas came into his own in the third after he stepped the pace up.

The fourth was all Kellet though, so much so that as the fight entered the final minute the Lithuanian appeared to give up and just stand with his back to the ropes due to the pace Kellett had set and just absorb punches at will.

After four great rounds it was to Referee Lee Murtagh’s scorecard, which unsurprisingly read 39-36 in favour of Lee Kellett.

The second fight of the night pitted the Turkish Republic of Cyprus’ Metin Turunc against Puerto Rico’s Jose F Leon.

Turunc started hard and fast, throwing massive bombs at every opportunity and literally was battering Leon, who could barely find an opening to counter with so many big shots constantly coming his way.

The Puerto Rican’s corner were so concerned that around the minute mark of the first round his corner threw in the towel in an effort to save their man further punishment, however Referee Lee Murtagh just kicked the towel out and let the fight continue, which it did but not for long as Turunc landed another huge shot to send Leon down and out on the one minute and twenty seven second mark of the first round.

Please don’t get me wrong, yes it was all one way traffic, as seems to be the norm with Turunc, I’ve seen him fight before and know just how relentless he is, Leon tried his hardest to stay in the fight but was outclassed by the seriously tough and powerful Turkish Cypriot.

The opening fight of the night really set the tone for the whole evening, as I hope I’ve made clear earlier that all bar the main event and of course Turunc vs Leon, the fights were all closely fought Battle Royale’s of the highest level, well believe me the opening bout, between debuting Lewis Mulberry and Gerona, Spain based Nicaraguan Pablo Narvaez, was another level again, it was sensational.

Mulberry really went for it right from the opening bell and boxed sensationally, Narvaez is a talent so no surprise he was up for a battle and gave as good as he got in return, however things went slightly awry for the Nicaraguan in the first when he got caught by a peach of a shot and sent to the canvas – will say I’ve seen Narvaez in action a few times and this is the first time I’ve seen him down, so kudos to young Mulberry.

Round two see Narvaez being a little more defensively minded, albeit still happy to go toe-to-toe with the big punching youngster. Round three though see a reverse in fortunes as Narvaez really started to take a foothold of the proceedings, which enabled Mulberry to showcase his defensive talents and sensational countering. The fourth was an out and out war with both men going for it for the full three minutes. After four scintillating rounds of boxing Referee Lee Murtagh scored the contest 39-37 in favour of the debuting Lewis Mulberry.

I have to make Mulberry versus Narvaez the fight of the Night, it was magnificent, and also have to say Mulberry really impressed, he’s the real deal, he has all the tools in his chest to go all the way to the top in our beloved sport, I for one can’t wait to see him in action again that’s for sure.