Cuban sensation and unbeaten WBA Super Middleweight Champion David O. Morrell Jr. will defend his title against undefeated challenger Mario Cázares in a 12-round duel that headlines FOX PBC Fight Night and on FOX Deportes Sunday, June 27 from The Armory in Minneapolis.

The broadcast begins at 8 p.m. ET/5 p.m. PT. It features cruiserweight knockout artist Efetobor Apochi taking on fellow unbeaten Brandon Glanton in the 10-round co-main event and rising super lightweight contender Omar “El Relámpago” Juárez battling All Rivera in a 10-round attraction to kick off the telecast.

Tickets for the event, promoted by TGB Promotions and Warriors Boxing, are on sale now and can be purchased at the Armory at http://ArmoryMN.com/ and through Ticketmaster.

“In his short pro career, David Morrell has already established himself as a force at 168 pounds, and he will look to put on another standout performance June 27 on FOX,” said Tom Brown, President of TGB Promotions. “Morrell will be motivated to impress as he returns in front of his adopted hometown crowd at The Armory.

Standing in his way is a tough contender in Mario Cázares, who is no stranger to pulling off an upset, having beat Julio Cesar Chavez Jr. in his last outing. Adding in an explosive cruiserweight bout between Efetobor Apochi and Brandon Glanton, plus the rising Omar Juárez against the rugged All Rivera, and June 27 is set to be a can’t miss a return to The Armory in Minneapolis.”

Based in and training out of Minneapolis, Morrell (4-0, 3 KOs) has shown off the prodigious talents that made him a standout in Cuba’s iconic amateur scene since arriving stateside in 2019.

Before being recently elevated, the 23-year-old captured an interim title by dominating then-unbeaten Lennox Allen in action on FOX in August 2020.

Morell recently delivered a third-round knockout over Mike Gavronski last December in his first headlining appearance on FOX. Morrell will return to fight at the Armory in his adopted hometown for the second time, having previously stopped Yendriz Rodriguez in his pro debut at the venue in August 2019. 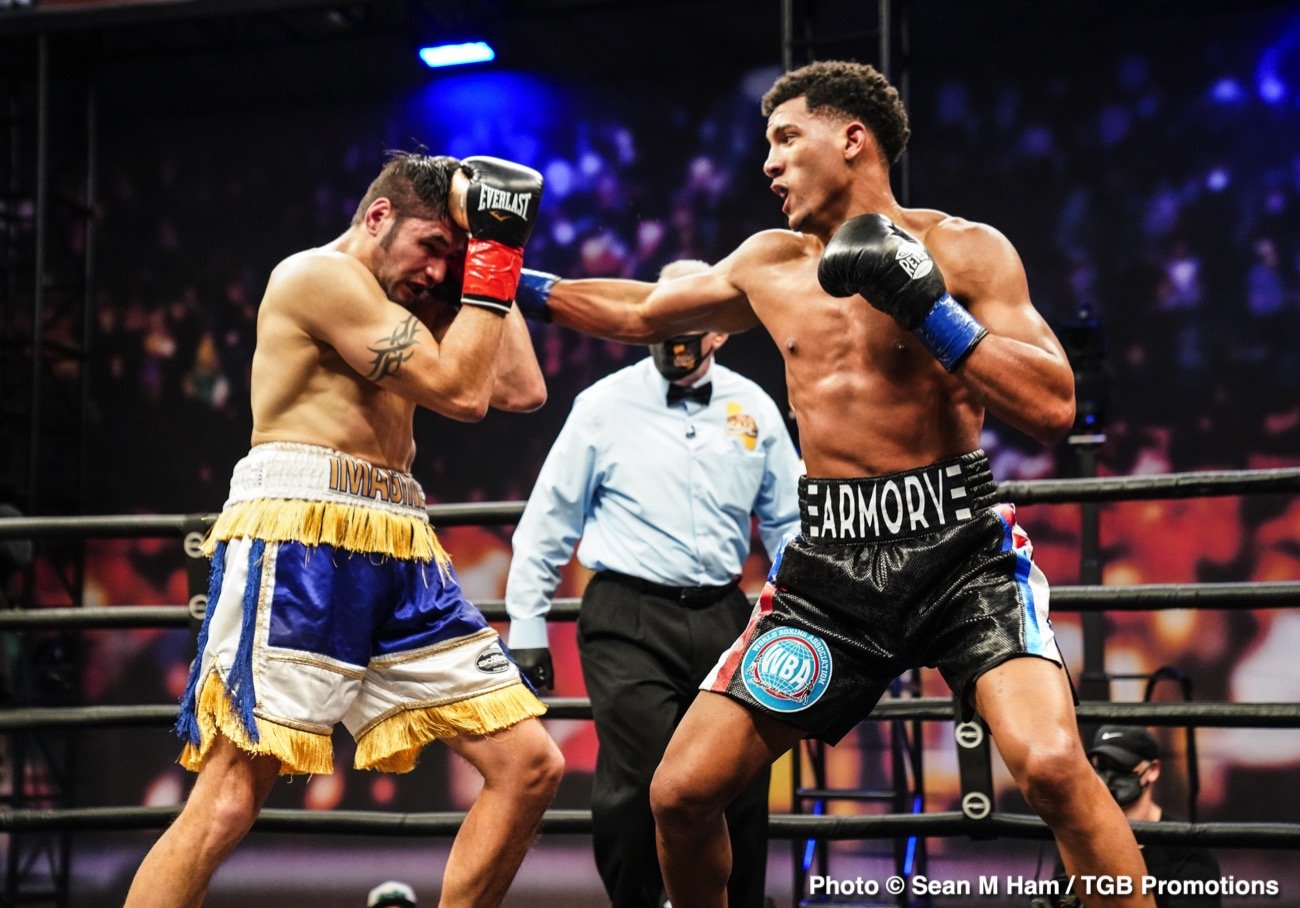 “As always, I am grateful to my whole team for the opportunity to step into the ring once again at The Armory in Minneapolis,” said Morrell. “This one is even more special to me because it’s my first title defense in front of my new home crowd in Minneapolis. I’m excited to feel the energy of the fans again, and against a perfect opponent. We’ve worked hard. Now it’s time to have fun.”

Cázares (12-0, 5 KOs) delivered a career-best victory in his last outing, earning a technical decision over former world champion Julio Cesar Chavez Jr., as all three judges had him ahead on the cards when the fight was halted in round six. The 30-year-old turned pro in 2015 and added three victories to his ledger in 2019 before triumphing over Chavez in September 2020. Fighting out of his native Baja California, Mexico, Cázares will make his U.S. debut on June 27.

“This fight is essential for my career,” said Cázares. “This kind of championship fight is what I’ve been working for. I definitely respect Cuban boxing and the style of Morrell. He’s someone with a lot of experience in the amateur field, which is now showing it in professional boxing. But I love being the underdog and coming into my opponent’s hometown. The fans in Minneapolis and watching on FOX and FOX Deportes are going to be in for a surprise on June 27.”

A native of Nigeria who trains with renowned coach Ronnie Shields in Texas, Apochi (11-0, 11 KOs) has knocked out all of his opponents since turning pro in 2016. The 33-year-old most recently blasted out a fellow unbeaten in April as he dropped Deon Nicholson multiple times en route to a third-round stoppage. Apochi has racked up five victories since the start of 2019, including impressive knockouts of Earl Newman and Joe Jones.

“I’m excited to be back in the ring,” said Apochi. “I came to America for only one reason: boxing. I’m always happy to do the job, whether it’s training, sparring or any other activity related to boxing. I have many things that I’m excited to show because I haven’t shown everything yet. Glanton called me out because he thinks he’s the real deal. I can’t wait to make a fool of him. I’m going to bring the drama, the action, and the war. I’m ready to prove myself again and again. No cruiserweight can go the distance with me. It’s impossible. Glanton is getting knocked out.”

The 29-year-old Glanton (13-0, 11 KOs) will face his toughest pro competition to date in the hard-hitting Apochi. Born in Atlanta and now residing in Riverside, California, Glanton picked up a pair of stoppage wins in 2020 ahead of his 2021 debut on June 27. After an impressive amateur career that included a fourth-place finish at the 2015 U.S. Olympic Trials, Glanton turned pro in 2017 and finished his first eight pro fights inside the distance. 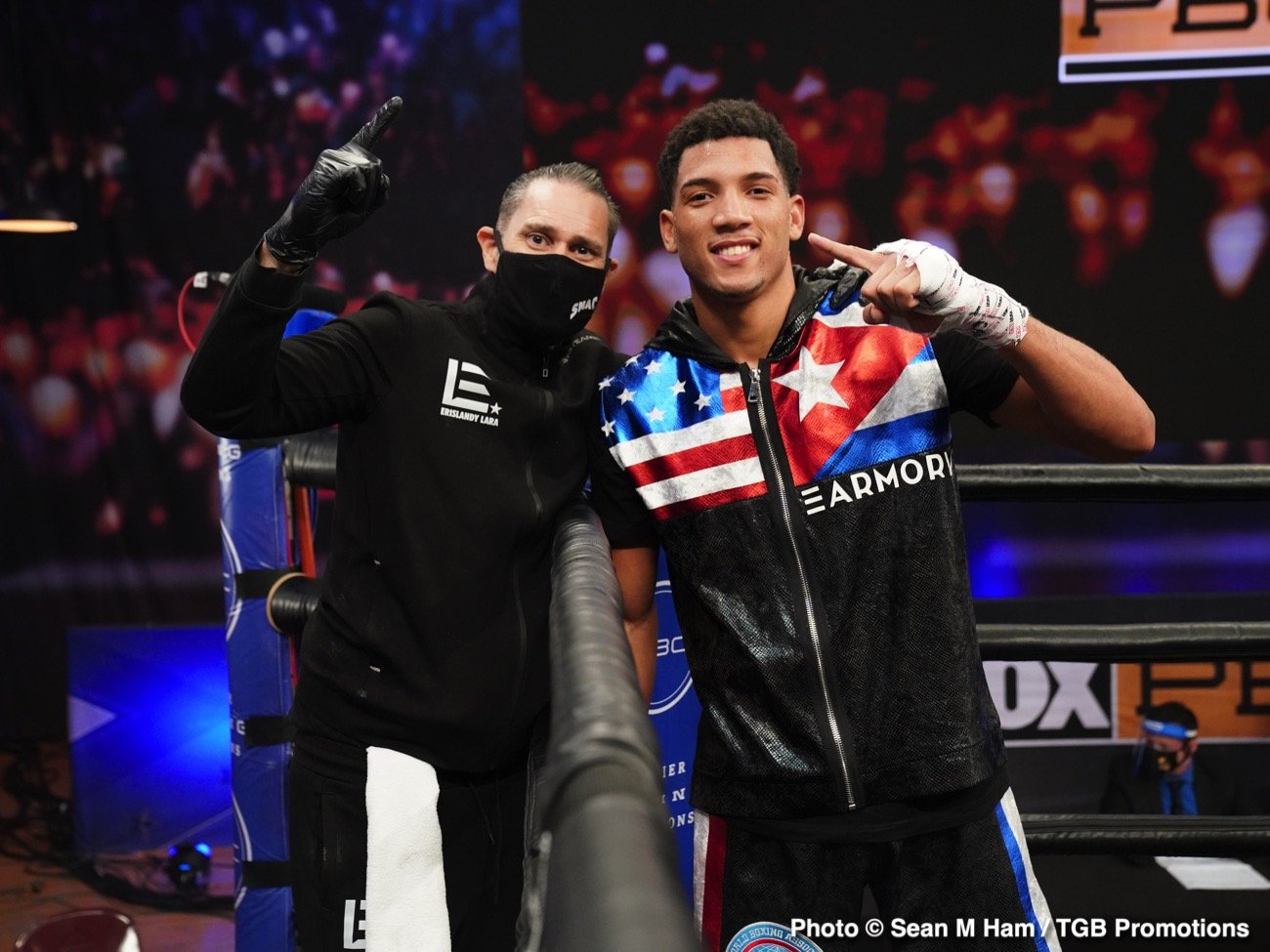 “I’m happy to have gotten this opportunity. It’s been a long time coming,” said Glanton. “We always prepare hard in camp to go up against the best opposition there is to offer. The only thing that changes is the victim standing across the ring from me. On June 27, you can expect to see the best version of myself. As for my opponent, you can only pray for him.”

Juárez (11-0, 5 KOs) continued his rise up the 140-pound division in April. He won his first 10-round fight, easily outpointing Elias Araujo on his way to a unanimous decision, kicking off his 2021 campaign following four victories in 2020. Juárez has been lauded as much for his work outside the ring as he has for what he’s accomplished in it. After graduating high school in his native Brownsville, Texas, the 21-year-old dedicated himself to giving back to the state’s youth through motivational speaking and received recognition from the Texas State Senate and the Texas House of Representatives for his efforts.

“I’m so grateful for another opportunity to showcase my talent to everyone tuning in on FOX,” said Juárez. “This is another step up fight for me. Rivera has twice as many fights like me, so I know he will be dangerous because of that experience. I feel I’m on another level, and I want to prove to everyone that I’m worthy of being looked at as a world-class fighter. I’ve taken my training to the next level, and I’m getting better with each fight. My confidence is at an all-time high, and I can’t wait to throw down on June 27.”

Fighting out of Santa Rosa, Philippines, Rivera (21-5, 18 KOs) returns to action after dropping a decision to two-division champion Rances Barthelemy in January on FOX. The 28-year-old has won four of his last six contests, including a 12-round decision victory over Rodel Wenceslao in 2020. Rivera will fight in the U.S. for the third time as a pro on June 27, having also faced talented Malik Hawkins. He has shown the ability to bounce back from adversity before, putting together a 10-fight winning streak following a loss in his pro debut in 2011.

“I’m ready for my return to the ring,” said Rivera. “This time, there will be no excuses. Everything I do from this point on is my journey to greatness. Omar Juárez better is ready for war because I’m going to give him everything he can handle.”

On This Day: When Baer Destroyed Carnera And Max Had Too Much Fun0 Total Shares
Andy Ruiz “Back In The Gym On Monday,” Mentions Luis Ortiz And Dillian Whyte As Possible Next Opponents0 Total Shares
Time to Recognize Shakur Stevenson as a Good Fighter and Not a Boring Fighter0 Total Shares

Chavez Vs. Camacho Jr On Saturday: When Chavez Beat My Father, That Was Heartbreak For All Of Puerto Rico0 Total Shares