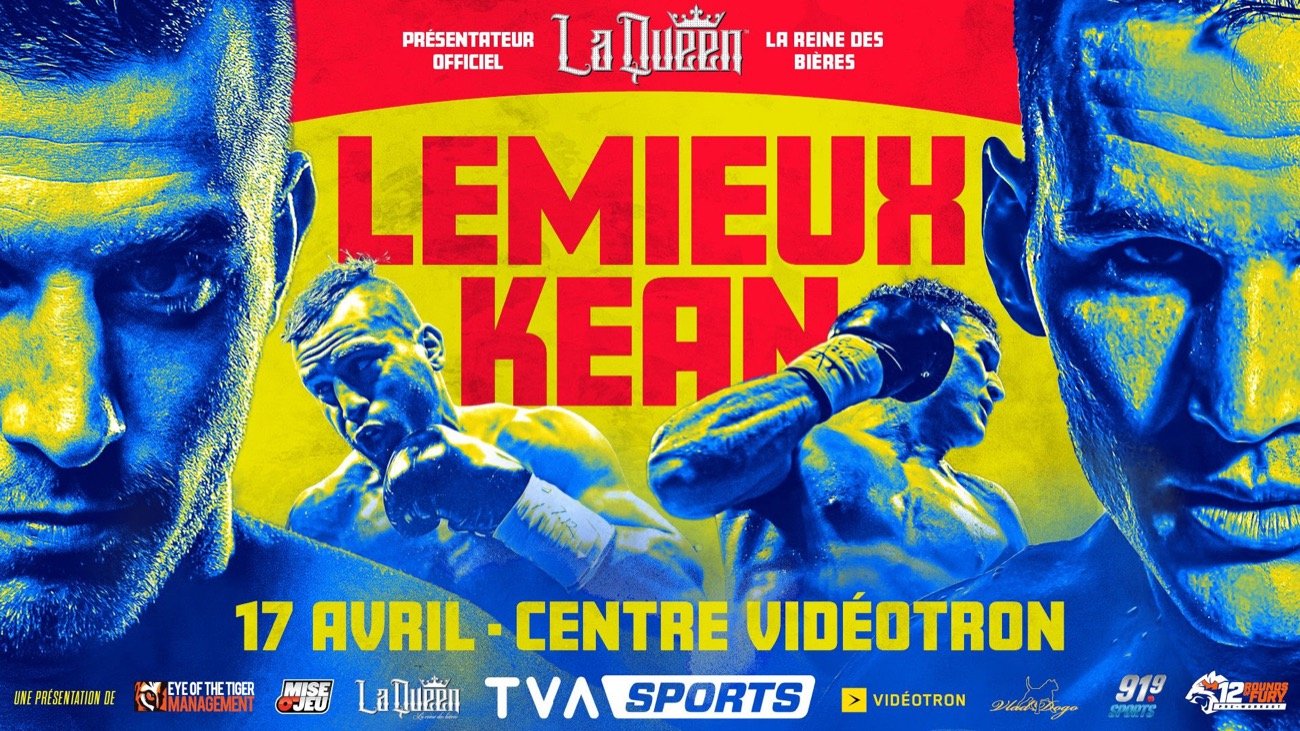 UPDATE: Postponing the April 17 gala to a further date

Montreal, April 2nd, 2021 – Considering the current epidemiological context as well as the tightening of health measures both in Quebec and internationally, Eye of the Tiger Management is forced to postpone its boxing gala which was set for April 17 that was to take place at the Videotron Center in Quebec on a date to be disclosed soon.

Since the outbreak of Covid-19 more than a year ago, Eye of the Tiger Management has worked hard, in collaboration with Public Health and the Régie des Alcools des Courses et des Jeux, to be able to keep their athletes active and to present quality events to boxing fans.

“After facing a number of pitfalls with our protocol to bring back boxing events behind closed doors, we once again find ourselves at a stalemate in trying to integrate international fighters into our April 17th program since the restrictions to which travelers are subject are constantly changing and complex in the face of the evolution of Covid-19 resulting from the new variants. Indeed, despite the fact that we had obtained the authorizations from Public Health for the holding of the event including boxers from outside the country, provided for the work permits, as well as the documentation for their stay and applied the measures put in place by the federal government targeting travelers, they have been refused entry into the country following the current situations in airports around the world”, notes the president of EOTTM, Camille Estephan. “We are extremely disappointed to have to make the tough decision to postpone the event of April 17, but we certainly do not give up,” he adds.

More information on the next dates for the Montreal organization will be divulged shortly.

On Saturday, April 17, Eye of the Tiger Management will return to Quebec City to present, for the first time in over a year, a boxing event at the Videotron Center. Initially, David Lemieux (42-4-0, 35 KOs) was set to face Robert Talarek (24-13-3, 16 KOs) while Simon Kean (19-0, 18 KOs) was going to go head-to-head against fellow Canadian Stan Surmacz (12-1, 7 K.-O.). However, both opponents had to withdraw themselves from the card.

David Lemieux will therefore face tough Spanish boxer, Ronny Landaeta (17-3-0, 11 K.O.). Once crowned European Union champion, in addition to winning the IBF International title in 2018, Landaeta is an aggressive boxer with excellent technique and good punch that can prove bothersome to Lemieux on April 17th. This boxer, who belongs to the top 6% of his category according to Boxrec, has a lot of professional experience and never refuses to face anyone, he who offered a true war against rising star, Aslambek Idigov (19-0 -0, 7 K.-O.). In addition, Ronny Landaeta is the only fighter to have been able to withstand the blows of the powerful slugger and former champion of France, Kevin Lele Sadjo (15-0-0, 14 KOs), in a 10-round bout last December 5.

“David had a good performance last October against Francy Ntetu (17-4-0, 4 KOs) and we want to keep him active to get a world championship fight in the super middleweight division. We are glad that we were able to find a boxer like Landaeta to replace Talarek as he always offers his best to his opponents. He’s never been knocked out, even though he’s faced some excellent boxers. Viewers will therefore be treated to quite the show on April 17 on TVA Sports,” said Eye of the Tiger Management President Camille Estephan.

For his part, Simon Kean will face American Donald Haynesworth (16-5-1, 14 KOs) in a duel scheduled for 8 rounds. The latter is known for his aggressiveness and great power that he manages to generate with both hands. Originally from New York, the one nicknamed
“Mr. JBT “is ready to take on anyone, anytime. Never refusing a challenge, he has already rubbed shoulders with many elite boxers in his division including Bryant Jennings (24-4-0, 14 K.-O.), Guido Viannello (7-0-1, 7 KOs), Zhiley Zang (22-0-1, 17 KOs) and Mark Brown (15-7-0, 7 KOs), among others. Haynesworth made two trips to Quebec hoping to replace Arslanbek Makhkmudov’s (11-0-0, 11 KOs) opponent on December 7, 2019 and Kean’s on February 21. This daring heavyweight has therefore been waiting for his chance to box in Quebec for a long time. This time, he will surely get his chance to battle it out with Simon Kean at the Videotron Center. It is also in this same amphitheater that the “Grizzly” suffered his significant defeat at the hands of Dillon Carman (14-6-0, 13 KOs). On April 17, Haynesworth intends to bring back bad memories to the Trois-Rivières heavyweight.

“I’m happy with the new opponent Simon will have in front of him. It’s a style of boxing that he has to face and fight to take him to the next level. In his career, he hasn’t seen many boxers who fight with the “American” style. It will be a good test to see if he can apply what he’s been working on in the gym,” said Simon Kean coach Vincent Auclair.

This event, presented by La Queen beer, Mise-O-Jeu and TVA Sports will be broadcast live on TVA Sports. It should be noted that the excellent card including the second duel between Mathieu “G-Time” Germain (18-2-1, 8 K.-O.) and Steve “The Dragon” Claggett (29-6-2, 19 K.-O.) as well as the fight between Artem Oganesyan (12-0-0, 10 K.-O.) and Josh “The Boss” Wagner (7-0-0, 5 K.-O.) will precede the duels by Kean and Lemieux and will be available exclusively on Punching Grace. Alexandre Gaumont (professional debut) will have his debut at the professional level against Mikhail Miller (3-4-1) while Bree Howling (2-0-0) will face Erika Jeanette Hernandez (5-6-1). To start off the eveing, Kenny Cherry (2-4- 0, 1 K.-O.) and Mathieu Duguay (0-1-0) will fight a merciless battle in order to impress viewers and recruiters of Eye of the Tiger Management. For more information, please visit www.eottm.com.