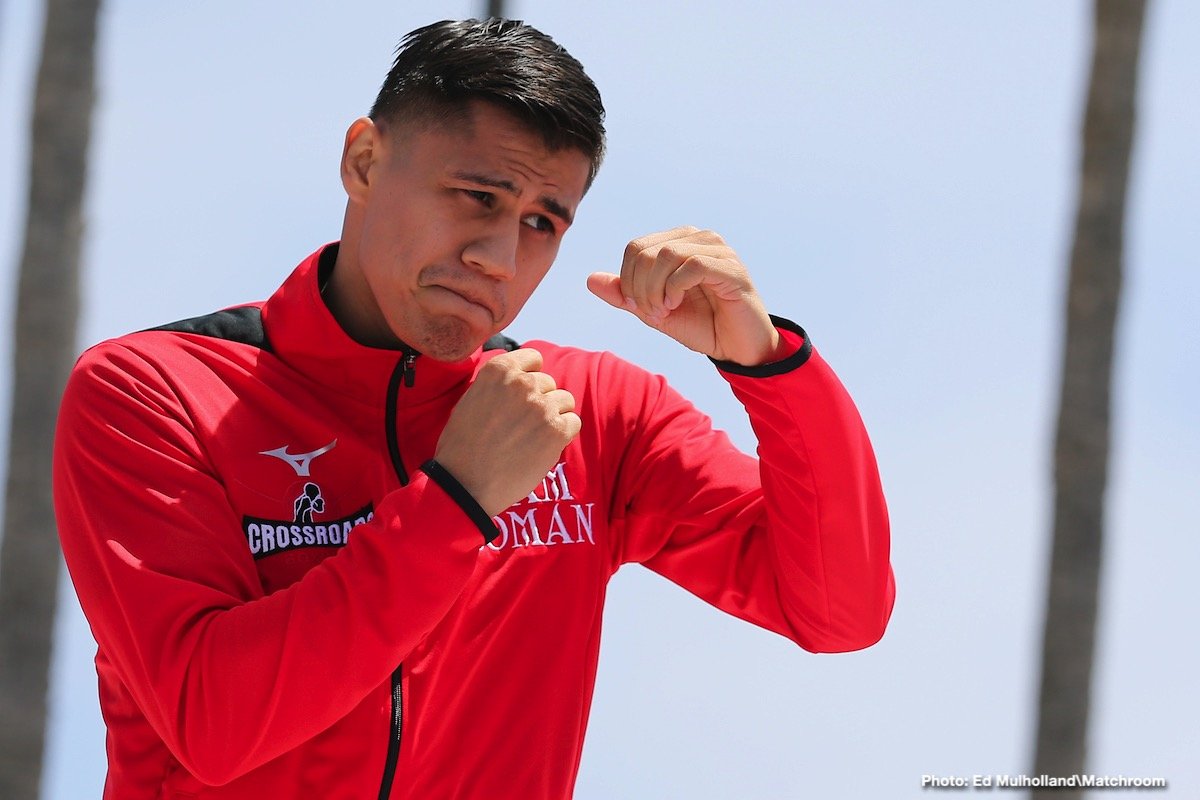 Daniel Roman says it’s a dream come true to be fighting to unify the WBA and IBF World Super-Bantamweight titles at The Forum in Inglewood, Los Angeles on Friday May 25, live on DAZN in the US and Sky Sports in the UK.

Roman (26-2-1 10 KOs) puts his WBA strap on the line for the third time since ripping the title from Ryo Matsumoto in Japan in February 2018. The LA star comfortably brushed aside Moises Flores on points in June in Dallas before swatting aside the challenge of Gavin McDonnell in Chicago in October with a tenth round stoppage.

Doheny (21-0 15 KOs) has followed a similar path to Roman having too landed his IBF strap in Japan against Ryosuke Iwasa in August. The Irishman saw off another tough fighter from the land of the Rising Sun in Ryohei Takahashi in New York in January in his first defense, grinding the challenger down with an 11th round stoppage.

Roman and Doheny now take the first step to becoming the undisputed champion at 122lbs, and for Roman, Friday’s clash represents a dream night for the Inglewood born 28 year old.

“This is the fight I wanted,” said Roman. “I was looking to unify the first fight after winning the belt. I want the best in the division and for me that’s the champions. Finally, that’s happening and it’s in my backyard in Inglewood where I grew up, so I’m so excited.

“I never thought that I would fight in the Forum, and now I am and it’s as a World champion and in a unification fight, what more can I ask for? That’s given me even more motivation that I get to start my quest to hold all the belts on home turf.

“Growing up in Inglewood was rough, there’s a lot of gangs and they try to get you involved so you have to stay away from that. You don’t look for problems, problems come looking for you. Staying in boxing kept me away from all that and I am grateful for that, and the area has got a lot better and I’m thrilled to be fighting there. I haven’t fought in LA since 2016 so all my fans can see me live, it’s great.

“I remember watching fights on TV and a few professional fights live, I was an amateur at that time and I never really thought about going pro, but it looked fun, but my goal was the Olympics.

“I would see fight posters for the Forum and I always imagined fighting there. They stopped having fights there for a while and now it’s come back, but I really never thought that I would fight here – but look at me now, the biggest fight of my career and it’s at The Forum – it’s what dreams are made of and I’m thrilled it’s happening.”

WBA and IBF Super Bantamweight World Champions Danny Roman and TJ Doheny square off this Friday night from The Forum in Los Angeles and streamed live on DAZN in the U.S. and Sky Sports in the U.K.

Roman, who is promoted by Thompson Boxing and Matchroom Boxing, offers his thoughts on the unification fight, his most memorable career moments, on returning to his hometown of Los Angeles, what he thinks of the fellow champion Doheny, and more in this brief Q&A.

“All the work has been done. I’m fine tuned and ready to go. The plan is to steal the show on Friday night.”

“TJ is a terrific talent. He’s a thinker and very calculating. I love a great challenge and can’t wait to see what he’s got. This is the type of fight that every world champion wants. The best fighting the best.”

“This is my fourth time defending my title so I know what to expect in terms of pressure and expectations. Just take it round by round and do what I do best and break him down.”

Unification fights are tough to finalize for a variety of reasons. Will a victory make you the best in the division, not just in your eyes, but in the viewpoints of the boxing community at large?

“I’ll leave that to the boxing public to figure out. I do know the best talents in the division are the champs and I’ve been very clear in my public requests to fight all of them. I don’t want to be the one to say that I’m the best. It’s just not in my nature. That stuff sorts itself out on its own. Doheny is a great champion so I have to get through him first before any talk of best in the division can happen. This is the fight that I’ve always wanted and people know that. The best fighting the best. That’s what people want to see.”

What about your boxing journey sticks out the most for you? Is it the early years when you were just trying to book a four rounder, your championship arrival, subsequent title defenses (now three successful and counting), or any other moments that make you realize what you’ve accomplished?

“There are a couple of moments. My first loss in 2011 was incredibly tough to handle. I was super young and just starting out. I had to quickly forget about it and just move on. It was easier said than done. Another time that is clear as day was my title eliminator with Adam Lopez in Atlantic City. Everyone favored him going in and nobody really gave me a chance except my team and my promoter. The fight was stopped in the ninth round because I basically used him as a punching bag. The other big moment was traveling to Japan and becoming a world champion. At that point, I had accomplished my dream and it’s a moment in time that will always be special for me.”

You’re fighting in the Los Angeles area for the first time since 2016. Prior to that, you were a staple at local boxing shows. How fulfilling is it to fight in your hometown with another title on the line?

“We’ve been traveling for a long time now. First the Atlantic City title eliminator and then we followed it up with two visits to Japan. After that it was Dallas and then Chicago. Since winning the world title in 2017, all my friends and family ask is when I’m going to be back in L.A. I’m going to have a bunch of fans in attendance. I’ll have a good amount of support in my corner. So yeah, I’m pretty pumped about fighting in backyard.”

Break down your opponent TJ Doheny.

“He’s a smart fighter. I saw him fight live so I know what he’s about. He knows how to use the ring. I have to watch out for his left hand. He knows how to move around so I might have to bring the fight to him, which is no problem for me. We have a plan in place and know how to adjust to different scenarios. We are well prepared like always.”

In its heyday, the Forum hosted many marquee fights and it recently has undergone a resurgence. What are your thoughts on potentially adding another storied chapter to this classic boxing venue?

“I grew up on those Forum fights so I’m familiar with the history. I actually always thought about one day fighting at the Forum, but boxing went away from the venue for awhile so I never thought I’d get the chance. It’s pretty crazy that I get to fight there and it’s even better since it’s a unification bout. I’m going to try to steal the show. Make it the fight of the night.”

Roman and Doheny clash on a blockbuster night of action topped as Srisaket Sor Rungvisai (47-4-1 41 KOs) puts his WBC and Ring Magazine Super-Flyweight titles on the line in a rematch with Juan Francisco Estrada (38-3 26 KOs).

Two of Golden Boy Promotions stars feature on the card in important battles as Argentinian Olympian Alberto Melian (4-0 3 KOs) fights for the second time in 2019 and second time in the States against Isaac Zarate (16-4-3 2 KOs) and former World title challenger Ronnie Rios (29-3 13 KOs) looks to return to winning ways against Daniel Olea (13-7-2 5 KOs).

Tickets are on sale now prices from just $31 – to charge by phone with a major credit card, call Ticketmaster at (800) 745-3000. Tickets are also available for purchase at www.fabulousforum.com or www.ticketmaster.com, and also at the Forum Box Office.