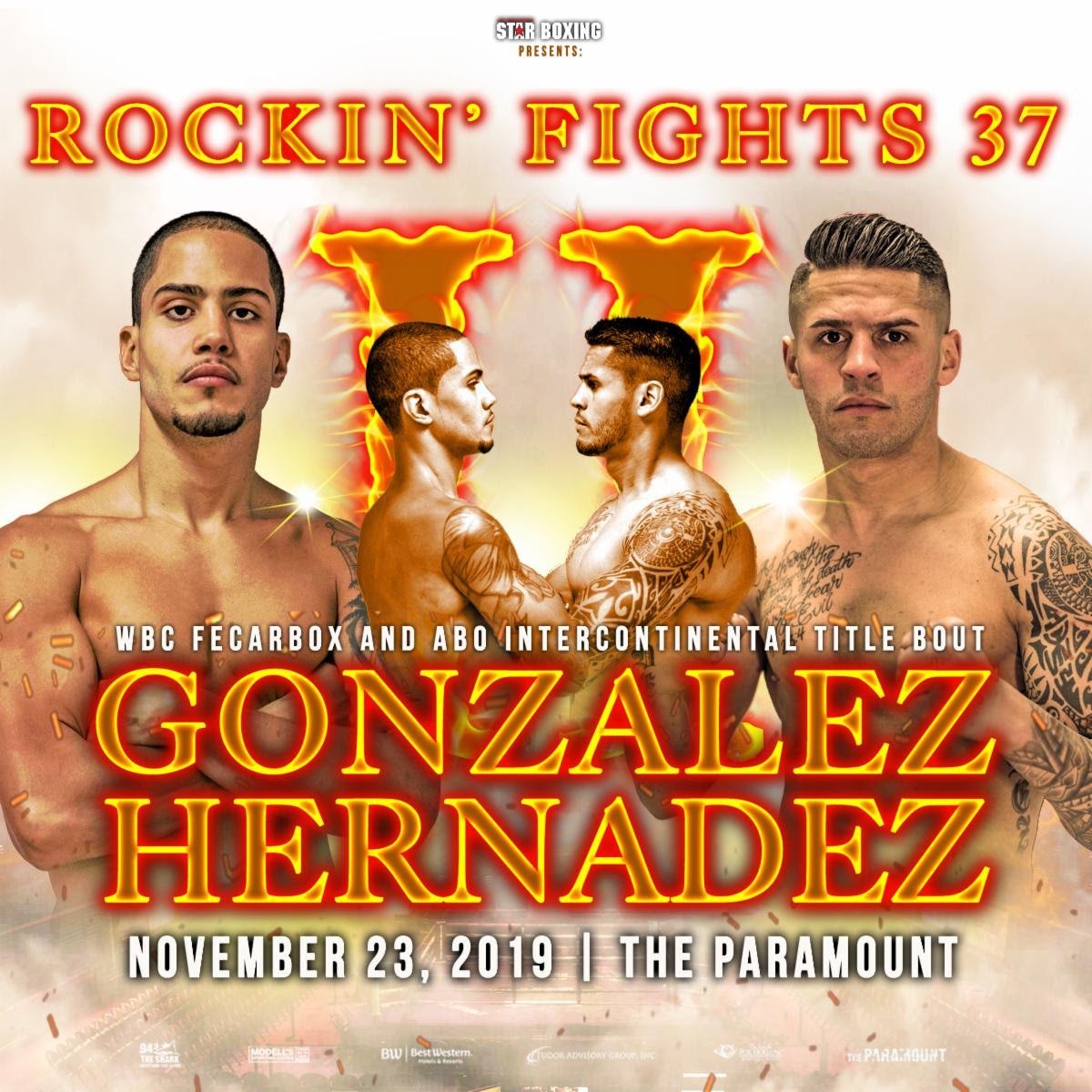 When The Paramount marquee lights up with Star Boxing’s “Rockin’ Fights” logo, boxing fans know they are in for a treat. However, come November 23, boxing fans are in for more than that when two hometown favorites in, DANNY “EL GALLO” GONZALEZ (Woodhaven, NY 18-2-1 7KO’s) and JOHNNY “HITMAN” HERNANDEZ (Huntington, NY 10-4 1KO) settle their bad blood in a rematch at the “Rockin’ Fights 37” main event.

In September of 2019, Hernandez and Gonzalez met for the first time at “Rockin’ Fights,” as both fighters took their chance at earning the ABO Intercontinental Super Lightweight Title. The 10-round bout was a back and forth battle that had fans on their feet from the opening bell. The sold-out crowd competed for sound-meter supremacy with alternating chants of “Danny” and “Johnny.” As intense as the crowd was, the fight inside the ring met the energy at every level. At the final bell, Danny Gonzalez took home the title by a majority decision.

Gonzalez and Hernandez are now set to return to The Paramount on November 23. No twitter fingers, no talk, just two men in a ring, settling their differences once and for all. The winner will claim, unofficial King of the Paramount bragging rights, two titles and a world level fight in 2020.

Danny Gonzalez had this to say about the rematch, “There are levels to this sport, and I will show the fans the difference between a full-time commitment to boxing as opposed to a part time boxer. On November 23, I will most definitely stop Hernandez, not only from running for his life, but also stop his mouth from spewing negative comments when he loses. We respect every fighter and never degrade anyone, but in the last fight he went overboard. With this fight, we will answer back not verbally as he does, but physically and with my hand raised.”

Johnny Hernandez said this about what fans can expect in the rematch, “I am thankful to be able to showcase my hard work again in front of my hometown friends and family. Last time I guaranteed fireworks, this time I plan on ending the show.”

Star Boxing CEO JOE DEGUARDIA said this about the “Rockin’ Fights” main event, “Both Danny and Johnny were developed right here at The Paramount. Both of them have large and vocal fan bases out here and the last time they met in the ring it was electric. We are expecting no difference come November 23, so be sure to get your tickets, because this is a rematch you will not want to miss.”

FACTS:
ROCKIN’ FIGHTS 37 is presented by Joe DeGuardia’s Star Boxing. “Rockin Fights” is sponsored by Modell’s Sporting Goods, The Tudor Advisory Group, 94.3 The Shark, The Best Western and The Inn at Fox Hollow.
SOCIAL MEDIA:
Follow all the action via social media at Star Boxing on Facebook, @StarBoxing on Instagram and @StarBoxing on Twitter, or by using the hashtag #RockinFights. For the latest Star Boxing events and news, follow @StarBoxing across all social platforms. Sign-up for our mailing list HERE.