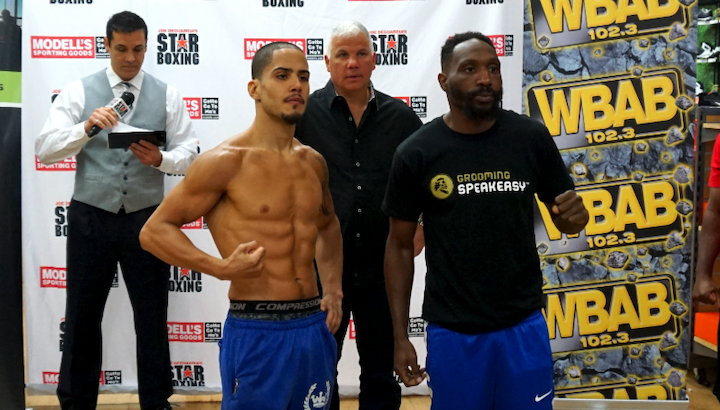 The DANNY “EL GALLO” GONZALEZ and JEROME “THE CONQUEROR” CONQUEST fight and the ABO America’s Welterweight Title bout between RONNIE “TEFLON RON” AUSTION and DENNIS “BILLABONG” OKOTH, will be available via FITE.TV PPV starting at 8:00PM/ET. FITE, the world leader in the digital distribution of combat sports will stream the event live on the www.FITE.TV website, FITE mobile apps for iOS, Android, and the FITE channels of Amazon Fire, Android, Apple TV, and Roku on a PPV basis. The FITE PPV will stream all five bouts and be available for just $14.99. Check availability in your area by going to the FITE.tv website.

Star Boxing is pleased to announce its return to Long Island, New York, after three months on the road, for another edition of the critically acclaimed “Rockin’ Fights” series on July 19th. Bringing a thrilling, New York centric professional boxing card, with an international flair, has become common place at Star Boxing’s “Rockin’ Fights” series, and July 19th will be no exception.

Returning for his fourth main event and tenth appearance at The Paramount, local favorite, DANNY “EL GALLO” GONZALEZ (Woodhaven, NY 17-2-1 7KO’s) will take on JEROME “THE CONQUEROR” CONQUEST (10-4 1KO) from the fighting city of Philadelphia. Gonzalez returns after impressing boxing experts this past January, when he took former world champion, current title contender and Star Boxing stablemate, CHRIS ALGIERI (Huntington, NY 24-3 9KO’s) the distance in an extremely competitive fight at the mecca of boxing, Madison Square Garden, for the WBO International Super Lightweight Title. The bout solidified Gonzalez as a true prospect. The July 19th bout will be a 10-round super lightweight contest for the WBC FECARBOX Silver Super Lightweight Championship.

Danny Gonzalez had this to say about his return to The Paramount, “I’m extremely excited to be making my well needed ring return. It has been a roller coaster year for me but at the same time I have been blessed to have the right people behind me pushing my career to new heights. I have been training hard as always and have been trying new things in camp to make me a complete fighter and athlete. I feel I’m getting close to finding that perfect recipe for success. It’s always thrilling to return to The Paramount where I remain undefeated. I love the crowd, the energy and the atmosphere is always electric.” Gonzalez continued, “I’m just eager to return to the ring and perform for the fans and give them an all-out action fight from start to finish. It will be a thrilling night. I expect to destroy my opponent and move on in the rankings to bigger and better fights.”

On the undercard, fans will be excited for the return of undefeated super welterweight, “The Jackpot”, TYRONE “PRETTY BOY” JAMES (Elmont, NY 9-0 6KO’s) as he takes on RAY OLIVEIRA JR. (New Bedford, MA 8-2 1KO). James has been out of the ring due to an ankle injury, but emphatically returns for his eighth bout at The Paramount, coming off of one of the most difficult victories of his young career. Facing Leo Carrizzales at “Rockin’ Fights” 33, James peeled himself off the canvas for the first time in his career, to later stop the tough Mexican brawler. This fight will be a 6-round super welterweight bout.

Making his return to the ring is Detroit product, RONNIE “TEFLON RON” AUSTION (Detroit, MI 10-1 6KO’s) as he faces off with DENNIS OKOTH (Silver Spring, MD 3-2-1 2KO’s). Austion, a highly touted prospect fighting out of Las Vegas, took his first loss at Star Boxing’s “Slugfest at the Sun” at Mohegan Sun in January. Austion hopes a win at The Paramount will put him back on track, to continue rising the welterweight rankings. Opposing Austion is Kenyan, Dennis Okoth, who recently earned a massive upset when he knocked out highly rated Irish welterweight Dyaln Moran at Star Boxing’s “Catskills Clash” in Resorts World Catskills. This will be a scheduled 8-round welterweight bout.

In a 4-round super bantamweight bout, JUSTICE BLAND (Brooklyn, NY) will be making his pro-debut against RAFAEL CASTILLO (Bronx, NY 1-2). Bland enters the pro-ranks with a solid amateur background including a record of 30-5, a 2018 New York Metro’s finalist and the 2018 Ring Masters Golden Glove Champion. While this is not the first time that the Brooklyn-Bronx rivalry has battled in the ring at The Paramount, this bout is sure to have the crowd on their feet.

In the opening bout of the evening, JUAN MANCILLA (East Hampton, NY 1-0) will face JERMAINE CORLEY (Mount Vernon, NY 2-6 1KO) in a 4-round super welterweight clash. The undefeated Mancilla is coming off of a three-year layoff, while Corley just recently upset Roberto Duran Jr. on June 28th at Resorts World Catskills in an epic bout that left all of the fans in attendance, in awe.

Star Boxing CEO JOE DEGUARDIA said this about the July 19th “Rockin’ Fights”: “There is no place like home, and that is what The Paramount has become – our home base. Fans will get a true New York boxing card on July 19th, headlined by Danny Gonzalez and fellow Paramount favorite Tyrone James. We are also thrilled to bring exciting Dominican Republic bantamweight prospect Junior Almonte to the States for the first time. “Rockin’ Fights” 35 will be another night to remember at The Paramount. Get your tickets now!”