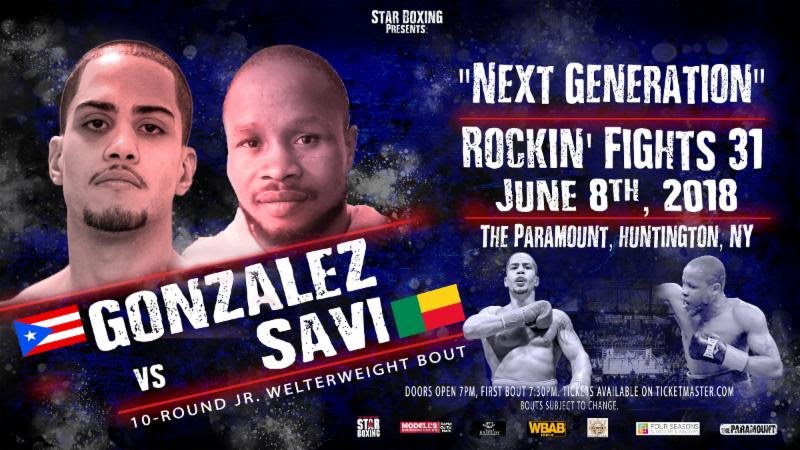 JUNE 8TH at THE PARAMOUNT was set to be a battle for bragging rights between two Long Island sluggers in ANTHONY KARPERIS and DANNY GONZALEZ. However, unfortunately, Anthony Karperis suffered a hand injury while training, causing him to be unable to fight on June 8th.

With a vacant spot in the “Rockin’ Fights” main event, JUSTIN SAVI (31-16-2 21KO’s) answered the call to take on Queens fan favorite, DANNY GONZALEZ (15-1-1 6KO’s) on June 8th. This scheduled 10-round main event bout will be another exciting and evenly matched fan-friendly fight.

DANNY GONZALEZ is coming off of a big time, TKO win on the undercard of “Rockin’ Fights” 30 in March. Gonzalez is undefeated at The Paramount and will look to make June 8th another tally in the win column. This will be Gonzalez’s first main event at The Paramount. A win on June 8th against a veteran with the pedigree of Savi will continue to raise Gonzalez’s merit, and will turn eyes at the upper echelon of the boxing world.

Gonzalez had this to say about his opportunity, “I love the Paramount. The energy, it’s not too far away from home. I have hundreds of my friends there, my supporters, my family. Everyone gets to come out. I get to stay home and relax and take a ride out there. Getting to that level, a 10-rounder main event against a good guy, it’s going to be an awesome night.”

Joe DeGuardia had this to say about the new main event, “It is always unfortunate when a fighter suffers an injury leading up to a big fight. We wish Anthony Karperis the best and a quick recovery, as we look forward to his return.” DeGuardia continued, “with Justin Savi stepping in to face Danny Gonzalez, the Long Island fans will not be disappointed. Savi will bring great veteran experience and pose a great test for Danny Gonzalez, who looks to continue to grow his Long Island fan base, and take the next step forward in his career. Fight night is just over a week away, so be sure to get your tickets now.”

TYRONE JAMES highlights a sensational undercard attempting to become the next undefeated star to come out of The Paramount, alongside the likes of CHRIS ALGIERI, JOE SMITH JR., and CLETUS SELDIN.

JOHNNY HERNANDEZ is a Long Island warrior, having fought seven-times at The Paramount. He brings the crowd to their feet in every bout and will look to continue rising the ranks come June 8th.

MICHAEL STOUTE will be in a battle of the undefeated against ANDREW STROUDE (4-0 1KO) of Colorado. Only one man will leave The Paramount unblemished, but both are guaranteed to leave everything in the ring.

JOHN ARROYO returns the Paramount on June 8th for the second time, looking for his fourth professional win. The crowd roared during his last fight in March, and his Brentwood faithful will be out in full force once again for another great “Rockin Fights.”