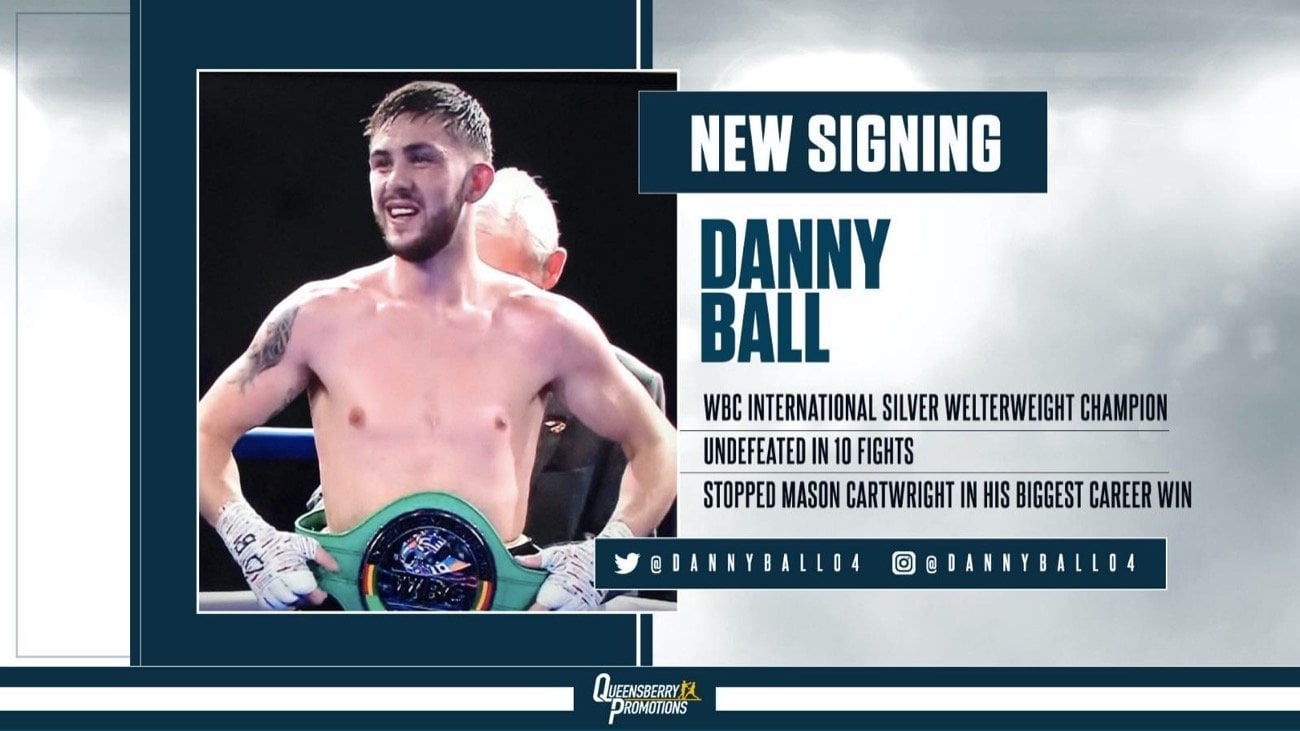 THE UNBEATEN MIDLANDS puncher Danny Ball has joined the welterweight ranks at Queensberry Promotions and will now fight under the Frank Warren banner.

The 23-year-old, who holds a record of 9-0-1 (4 KOs), enjoyed a major career breakthrough in October of last year when he upset the odds from the away corner in Ellesmere Port and stopped the home fighter and highly regarded Mason Cartwright inside three rounds to claim the vacant WBC International Silver title.

It was a statement performance that signalled a new force arriving on the welterweight scene that includes now fellow Queensberry fighters in Chris Jenkins, Johnny Garton and new boy Ekow Essuman.

The clinical finish clearly caught the eye of those charged with recruitment at Queensberry, who quickly registered an interest.

“I can hardly believe it because it is such a massive thing and a massive opportunity for me,” reacted the Kingswinford-based Ball to his career development.

“Just after I won my WBC belt back in October my manager Errol (Johnson) said there had been contact and there was some interest in me. Then it went quiet for a bit and I didn’t think anything was going to come of it, but then the contract came through so I signed it on the same day and sent it straight back!

“It was an unbelievable feeling,” added Ball, who knew full well that he wasn’t drafted in for a shot at his belt with any expectation of him pulling off a victory.

“I don’t think anybody expected it apart from me and my team really. Everything was geared up for him to win it. He sold about 500 tickets, while I took about 100 up to Ellesmere Port with me and took it away from him as soon as I had the opportunity. I took it with both hands and I was always confident of winning the fight anyway.

“One hundred per cent it was my breakthrough and when we took it I said straight away that I was confident of beating him. It took me a couple of rounds to warm into the fight, but he didn’t faze me and when the opportunity came I got him out of there.”

Boxing runs through the Ball family with his uncle, Shaun Cooper, being a veteran of over 90 fights and captained the England amateur team, while his brother Jamie is the Midlands Area champion at super welterweight.

Danny himself departed the amateur scene at the age of 15 after 12 fights, of which he won nine. A rise in weight due to the inactivity led him to the white collar circuit to get fit, where he took part in 15 fights and won them all.

He made his professional debut with a first round stoppage in July 2017.

While he reckons it won’t be himself that starts any flirting with the more established 147-pounders, he insists he will not shy away if any of them are ready to sign up for battle.

“I don’t think I am in a position to call anyone out, but if they come to me I wouldn’t turn it down. I am 110 per cent confident of getting in there with anyone in the top five or ten in the rankings. No problem.

“I don’t think I have hit my prime in my body yet so just keep putting them in front of me and I will keep taking them out, then hopefully I will get the opportunity of another belt on the way up.

“It is a boring time at the moment but I am glad of the time with my little girl. I have been ticking over doing my road runs and exercises in the garden. I am just getting itchy to start punching again now.”

FRANK WARREN IS delighted to announce the signing of Amin Jahanzeb to the Queensberry Promotions stable.

The 23-year-old featherweight has accumulated a record of 7-0 (2KOs) and is now determined to build on his perfect professional start on the platform of the renowned Hall of Fame promoter.

“Listen, it is about time now for me getting out there,” said Jahanzeb, who hails from Bradford. “It is a top platform, a great one, now we will show people on the bigger platform what we are really about.

“It is time to show greatness,” added the Haroon Headley-trained fighter, who wants to significantly up the risk levels when he steps into the ring.

“I’ve been wanting to step up since my second or third pro fight. All the opponents I was asking for were big step-up opponents but, obviously, it is a process and sometimes you cannot get them.

“Any step-up I am offered now I will take in the blink of an eye,” he insisted before reporting on his amateur background and his management link-up with Tunde Ajayi.

“I had less amateur experience due to injuries and it went a bit slow. I had 19 fights, 15 wins and I won a Senior Development national title. I won over half of my fights by KO.

“Tunde Ajayi, as people know, thinks big. I think big and I never think on a small scale. Of course you have to take steps to get higher and higher, but you also need the vision.

“Big thanks to Tunde and my coach at Heavyhitters, Haroon Headley. Haroon is a great guy and a great coach who has been putting time in with me. With the three of us working together we are all on the same page and we communicate so well.

“I travel to Manchester to train with Haroon because to be successful you have to go out of your way and cannot have everything on your own doorstep. I want to be the best so I’ve got to go out, do what I’ve got to do and go where I’ve got to go.”

When asked to describe his fighting style, Jahanzeb was not specific because he believes he brings a bit of everything to the ring, including a pick ‘n’ mix of some famous names from the past.

“If you watch me once you will want to watch me again! Honestly, I can do it all and I am not just saying it like others do. I can box front foot, back foot or even on one foot if you want me to.

“I grew up on guys like Roy Jones jr, James Toney, Gerald McClellan – I watched guys like that and have studied them since I was 13 or 14 years old. I take bits from every fighter – all the old school ones – and mix it all in one pot. Then you have me.

“I like to fight and I can box too. It depends on what mood I am in on the night. A lot of my opponents punch fresh air and if you watch my fights you will see I can come forward and counter-punch as well.

“Everyone who has seen me fight once has always comes again.

“All I am looking at now is just to get my next fight on the Frank Warren platform and show up and show out on the night. Myself, Tunde, Haroon and now Frank have got a plan, so they will lead the way and every man does his job.”