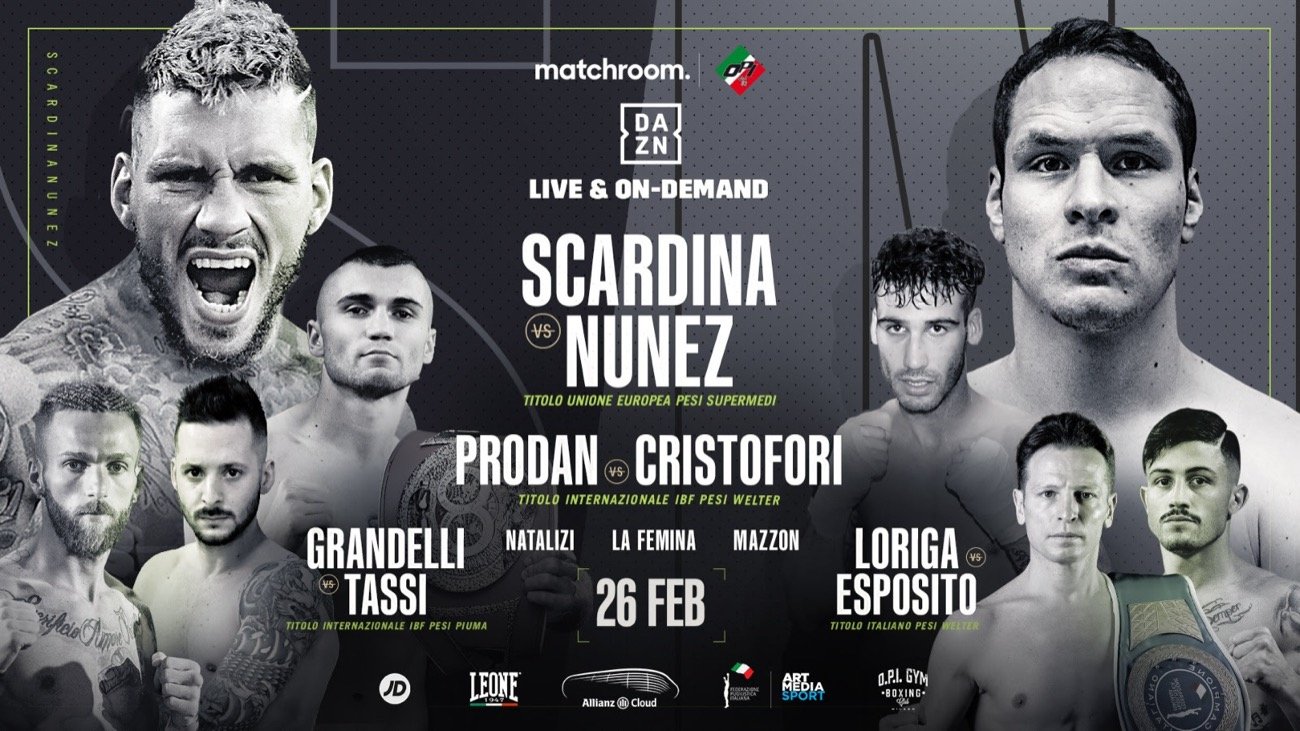 The weigh-in of the Milano Boxing Night was held today at Hotel Raffaello in Milan, Italy. The ceremony was presented by David Diamante. DAZN will stream the event live from Italy (click here). The event will take place on February 26 at Allianz Cloud in Milan: local idol Daniele Scardina (Italy, 18-0 with 14 KOs) will fight Cesar Nunez (Spain, 17-2-1 with 9 KOs) for the vacant European Union super middleweight belt. IBF International welterweight champion Maxim Prodan (18-0-1 with 14 KOs) will defend against Nicola Cristofori (11-2-2 with 1 KOs) and Italian welterweight champion Tobia Loriga (32-8-3 with 6 KOs ) will defend against young lion Nicholas Esposito (13-0 with 5 KOs). Super welterweight Mirko Natalizi (9-0 with 6 KOs) will fight Belgian Teffahi and featherweight Vincenzo La Femina (6-0 with 3 KOs) will fight Nicaragua’s Pablo Narvaez. DAZN will stream the event live and later on demand. The fight card commences from 6.30 p.m. local time (CET), which means 2.30 p.m on America’s East coast and 7.30 p.m. in the UK.

Daniele Scardina will face Cesar Nunez for the vacant European Union Super-Middleweight Title at the top of a stacked night of Italian boxing at the Allianz Cloud in Milan on Friday February 26, live on DAZN.

Scardina (18-0, 14 KOs) makes his long-awaited return to the ring following a frustrating 2020 in which he didn’t fight due to the Coronavirus pandemic, and ‘King Toretto’ will be looking to pick up where he left off as he strives towards world honours.

Spain’s Nunez (17-2-1, 9 KOs) will be aiming to overcome the disappointment of his WBO International Title fight with Zach Parker being cancelled in December due to his cutman returning a positive COVID-19 test.

Matchroom Sport Managing Director Eddie Hearn said: “We’re excited to return to the Allianz Cloud in Milan for Matchroom Boxing Italy and OPI Since 82’s first show of 2021. Daniele Scardina was making excellent progress before the Coronavirus pandemic forced him out of the ring in 2020. We look forward to his return against Cesar Nunez. As always, we have a strong undercard featuring a further three championship fights and an array of Italian prospects. Catch all of the action live on DAZN.”

Christian Cherchi of OPI Since 82 said: “We are very happy to finally have Daniele Scardina back in the ring for our first show of the year. Maxim Prodan is lighting up the Welterweight division and faces another test in Nicola Cristofori, Nicholas Esposito goes for his first title against the experienced Tobia Loriga, the IBF International Featherweight Title clash between Francesco Grandelli and Davide Tassi promises fireworks , heavy-handed Mirko Natalizi is always in entertaining fights and Vincenzo La Femina and Christian Mazzon both have another golden chance to impress. Don’t miss any of the action live and on-demand on DAZN.”

Cesar Nunez: “I already fought opponents like Daniele Scardina and I always won!”

Born in Pamplona, Spain, Navarra region, 35 years ago, “Bam Bam” Cesar Nunez is a former Spanish middleweight champion. He won the belt defeating Jorge Vallejo on April 14, 2018 in Pamplona. That success made Nunez a local hero because Navarra doesn’t have a strong boxing tradition. He made news again when he became the first Navarro to fight at Madison Square Garden in New York, on December 14 2019, but he lost by 1st round TKO against undefeated American rising star Edgar Berlanga. Cesar Nunez also lost against former WBA world super-middleweight champion Vincent Feigenbutz by 8th round tko on August 17, 2019 in Germany. The most recent fight of Cesar Nunez was on February 20, 2020 at Navarra Arena in Pamplona where he defeated Alejandro Mostazo by 2nd round TKO. Last December 4 at Wembley Arena in London, England, Nunez shoud have fought undefeated British Zach Parker, but Nunez’s cutman tested positive to Covid-19 and the fight was canceled.

Cesar, when you were informed that you would fight Daniele Scardina?

“At the end of December, but I was already in shape for the fight against Zach Parker. Anyway, two months are enough to prepare for a major fight with a belt on the line.”

Where did you train for the Scardina’s fight?

“At Kanku Gym in Burlada, close to Pamplona, with my coach Jose Vicente Eguzkiza. He is my coach since the beginning of my boxing career.”

Did you watch Daniele Scardina’s fights?

“Yes, he is a very good fighter who uses the jab a lot and knows how to reach the distance to hit his opponent. I already fought boxers with his style and I always won. I have been inactive for too long and I can’t wait to get back in the ring.”

Do you have or had when you started a boxing idol?

“I like Julio Cesar Chavez, Roberto Duran and Evander Holyfield for their determination.”

You have been Spanish middleweight champion and now fight as a super middleweight. What division is best for you?

“Right now, the super middleweight division. I don’t have any problems making the weight, I feel strong and I am satisfied with my training.”

Daniele Scardina lives in Miami Beach where he trains at legendary 5th Street Gym and has fought in Italy, USA, Haiti and Dominican Republic. He had most of his success in Italy where he won and defended the IBF International super middleweight belt. Former Spanish middleweight champion Nunez said this about Scardina: “He is a very good fighter who uses the jab a lot and knows how to reach the distance to hit his opponent. I already fought boxers with his style and I always won. I have been inactive for too long and I can’t wait to get back in the ring.”

Daniele, what you answer to Cesar Nunez?

“Is he sure to beat me? We’ll see next Friday at Allianz Cloud.”

When you started to train for this fight?

“Last December 22, I went back to Miami Beach and I started training at 5th Street Gym with Dino Spencer who has been my coach since the beginning of my professional career. After a few day, we were informed that I would have fought Cesar Nunez for the European Union super middleweight title. I had a fantastic training camp which included former IBF world super middleweight champion Andre Dirrell. I’m well trained and therefore I’m sure to win.”

Did you see your opponent’s fights?

“Yes and I think that he will be a worthy opponent.”

You fought for the first time in an event promoted by Opi Since 82 on July 21, 2016. Then you fought three times in Italy in 2019 winning and defending the IBF International super middleweight title. Are you satisfied with your choice to fight in Italy?

“I’m very satisfied, but I told to Cherchi’s family that I’m also avalaible to fight abroad. Opi Since 82 has a promotional deal with Matchroom and therefore there could be an opportunity to fight in the U.K. or the USA.”

If you beat Cesar Nunez you will become European Union champion and you will be challenger of the European champion. Right now the title is vacant, the challengers are Giovanni De Carolis and Lerrone Richards (Great Britain). If De Carolis wins, would you fight him?

“I know Giovanni well and I consider him a friend. That said, if the fight was promoted as a big event with big purses for me and him, why not?”