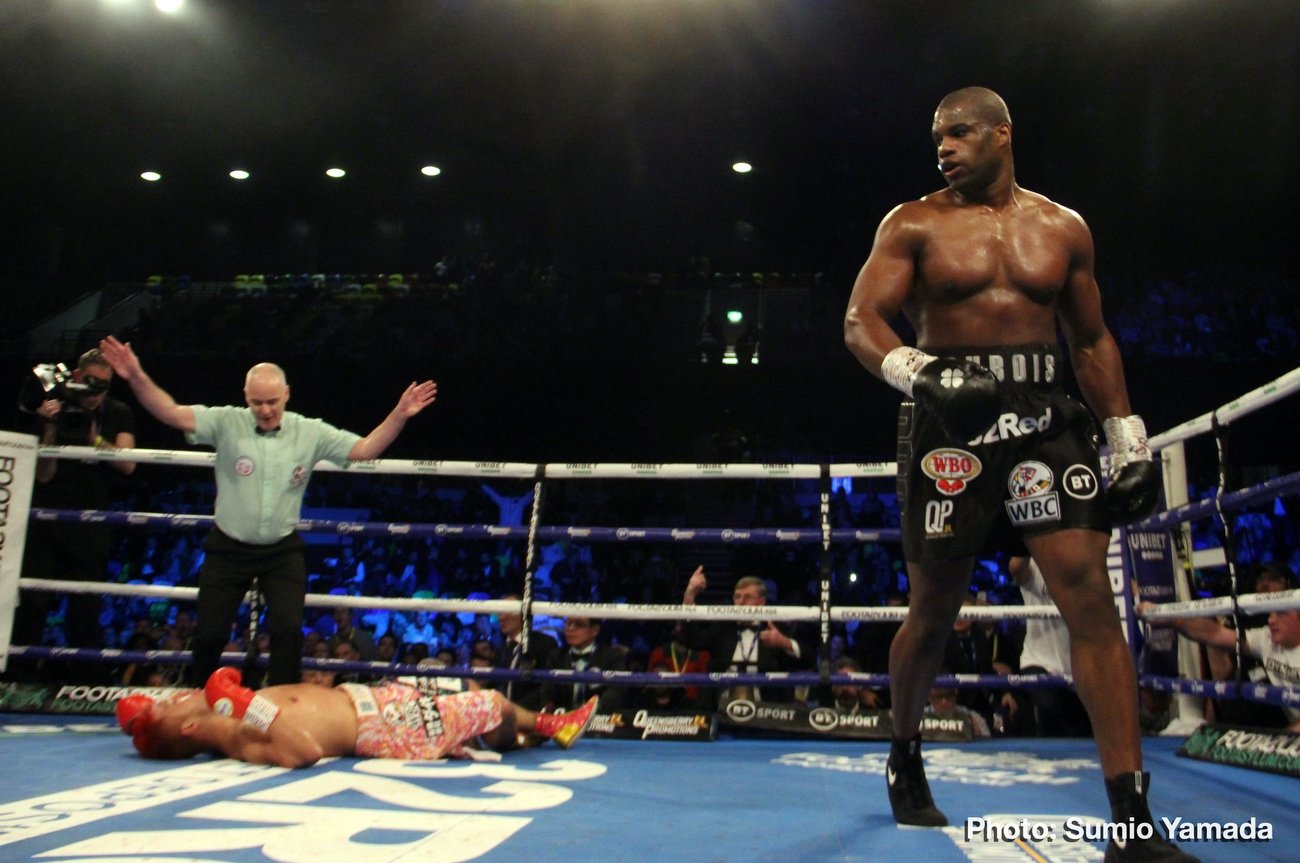 Speaking on the latest installment of Frank Warren’s Heavyweight Podcast, the Sheffield icon expressed his admiration for promoter Warren’s eye for talent and spoke of the qualities that he believes make Dubois a surefire superstar.

“Frank knows how to pick the best fighters” he said, “and at the moment I think he’s got one in Daniel Dubois who I really think is going to light up the world.”

No stranger to a knockout himself, Naz added: “He has that crushing power. I love the way he fights… the way he punches to the body too.”

Despite his young age Dubois has already carved out an impressive 14-0 professional record, with 13 KO’s to his name, and has a list of boxing luminaries queuing up to praise him.

Hamed’s voice joins those of George Foreman, David Haye, Frank Bruno and Larry Holmes, amongst others, who have recently spoken of the potential for greatness in Dubois’ future.

‘Dynamite’ is next scheduled to face domestic rival Joe Joyce in a mouthwatering all-British battle that many see as a stepping stone to world title contention.

Hall-of-Fame promoter Frank Warren clearly agrees and earlier this week declared Dubois to be the “best Heavyweight prospect on Planet Earth” and sensationally backed him to be victorious in a potential shootout with Deontay Wilder.

Prince Naseem wasn’t drawn on that particular match-up but did issue an ominous warning to the Heavyweight division as a whole.

“I am looking forward to watching Daniel Dubois’ career unfold. For me, I believe he takes over Heavyweight boxing.”

Famous for his exploits in the lighter weight classes, Naz did also reveal that he is keeping a keen eye on another of Queensberry’s brightest prospects: 19-year-old Bantamweight, Dennis ‘The Menace’ McCann.

“I like Dennis. Dennis is a good fighter, definitely. I’m expecting him to be a world champion.

“For me, that’s one of the guarantees of boxing: Dennis and Daniel Dubois being world champions.”

DANIEL DUBOIS facing fellow knockout artist Deontay Wilder, could be one of Heavyweight boxing’s big fights of 2021 according to the British champion’s trainer Martin Bowers.

“It’s a fight that in about 12 months would be a fantastic one for the fans,” said Bowers.

Dubois and Wilder both have massive scraps ahead of them in the near future that are sure to have fans on the edge of their seats.

Wilder attempts to regain the WBC championship when he meets Daniel’s Frank Warren stablemate Tyson Fury for the third time whilst Dubois will meet Joe Joyce in a mouthwatering domestic dust-up.

But talk of Dubois facing Wilder has sparked hot debate in boxing after Hall of Fame promoter Warren suggested he would welcome the fight.

Bowers added: “Dan has a massive job to do against Joe, and Wilder is fighting Tyson again in his next fight.

“I get the appeal of Daniel and Wilder. They are two big bangers, but Daniel can also box. Right now, we have one job to do and that is beating Joe.”

“Daniel is young, hungry and ready to go, but before we talk Wilder he has to beat Joe Joyce and that is no foregone conclusion.

“Tyson Fury was never looked on as a puncher but look what he did to Wilder. Daniel is a KO artist so what’s to say and he can’t do the same to Wilder.

“Wilder is still a danger and will be for Fury, but Daniel is only going to get better and is young enough to bounce back if he loses.”

Ajayi who trains Anthony Yarde, first met 22-year-old Dubois when the hot prospect was still at school and boxing for Lynn ABC.

He added: “Daniel’s Dad told me when I met him for the first time years ago that he wanted him to be one of the world’s youngest Heavyweight champions in history. We’re talking stars aligning because he’s on the way.

“Daniel doesn’t say a lot, but if he beats Joe then he is out there and ready for them all.”

British training great Billy Graham is excited at the thought of Dubois v Wilder and would back the young Londoner against the American.

Graham who famously trained Ricky Hatton says: “Of the current Heavyweight prospects I have seen, Daniel is the one that stands out.

“I wouldn’t back him against Tyson Fury, but he is capable of knocking out Wilder or anyone else in the division.

“The only worry I have is Daniel’s inexperience and whether he holds a shot because nobody can take Wilder’s right hand if it lands proper.

“He has rhythm and can move like a good Riddick Bowe and Sonny Liston.

“I know there has been talk of Wilder and while I think Daniel can win, I would wait a little while because he is getting better and better with each fight.”

Leading London trainer Alan Smith is also wowed by Daniel, adding: “I think he beats Wilder now. Wilder is a bully who was shown up by Tyson Fury.”

Another big puncher, former WBO Cruiserweight champion and TV pundit Enzo Maccarinelli sounded a note of caution before unbeaten Dubois who has knocked out 13 of his 14 victims moves on.

Maccarinelli who hopes to have his 50th fight later this year added: “If Daniel comes through what is a hard fight against Joyce he should have two or three more fights after before facing men like Wilder.

“Daniel is a fighter and I’m sure if he was offered Wilder by Frank he would take it, but I would like to see him wait.

“Daniel is really good and so impressive against Nathan Gorman, but he still lacks experience and that showed against Kevin Johnson.”

Inexperienced he might be for now, but once past Joyce few will be able to argue that Dubois doesn’t belong with the Heavyweight division’s elite.