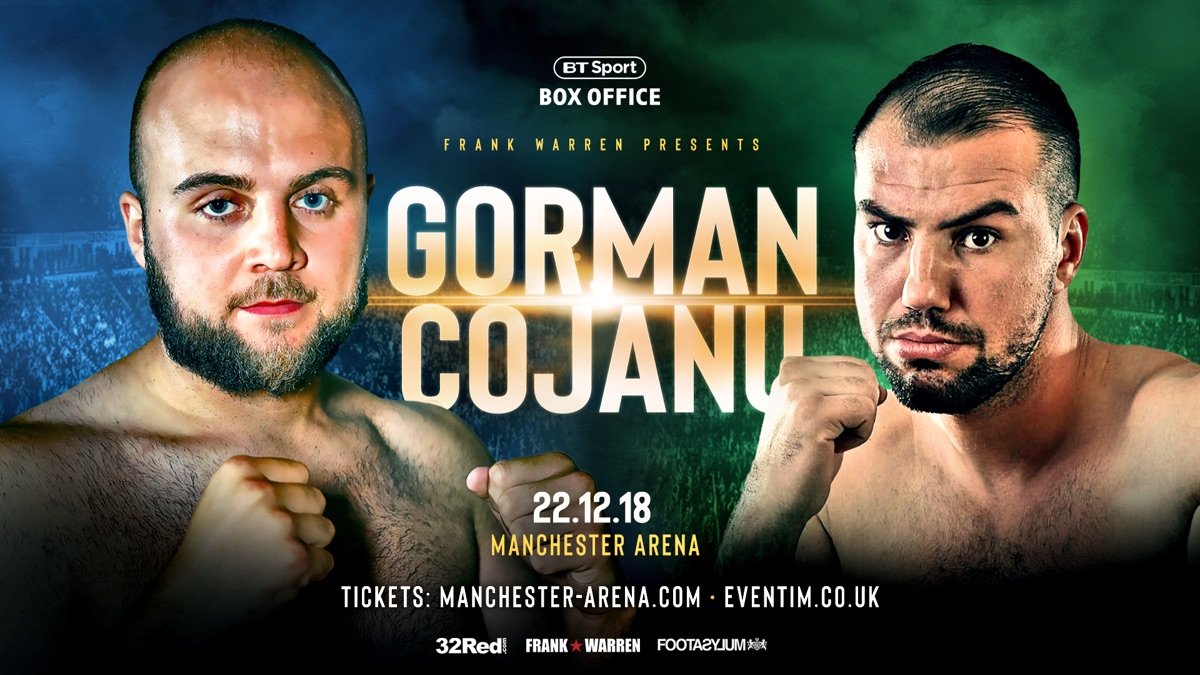 Romanian-born Cojanu was scheduled to fight Britain’s other big heavyweight prospect, Daniel Dubois this Saturday at the Brentwood Centre but due to illness, Dubois was forced to withdraw from the bout.

But fortunately for both fighters, Cojanu will now make his way up north next week and challenge Gorman at the Manchester Arena on December 22nd, live on BT Sport Box Office.

“I’m disappointed Leapai didn’t get on the plane. He’s given it some bad mouth which isn’t really my style, but in my world, if you are going to do that then you come and have a fight. Words are cheap, maybe he regretted his words knowing what was coming?” said Gorman.

He continued: “I thought it was going to be a big let down trying to get an opponent this late but at the very last minute, Daniel’s bad luck has proved well for me; that’s ironic really.

“I get to fight a guy who fought for a world title just last year and took Joseph Parker the distance, so he is a better opponent in many respects.

“He is here, he is in the country and I’m looking forward to putting on a show again at the Manchester Arena.”

Daniel Dubois (9-0) has been forced to withdraw from his fight with Razvan Cojanu scheduled for Saturday night (15th December) at the Brentwood Centre.

The BT Sport televised show will go ahead as planned, however, today’s scheduled press conference at the Grosvenor House in London has been cancelled.

Dubois, who came down with flu this week, is bitterly disappointed that he will not be fit to box on Saturday night and is deeply apologetic to his fans.

Dubois said: “In a sport like boxing, if you are less than 100 per cent health-wise going into the fight, then the only sensible option is to withdraw and go again on another date. It is bitterly disappointing for me, all the same, because I was looking forward to reaching double figures in professional fights before Christmas.

“That will just have to wait now and I can only say I am sorry to Razvan and the people who were coming out to watch me on Saturday night.”

Promoter Frank Warren said: “This is a big blow but the show must go on. I feel for the fans and for Razvan but if Daniel has got the flu, there’s no way I’m letting him fight. It’s important we still deliver to the live and the TV audience and they can look forward to seeing many of London’s finest boxing talents on Saturday night.”