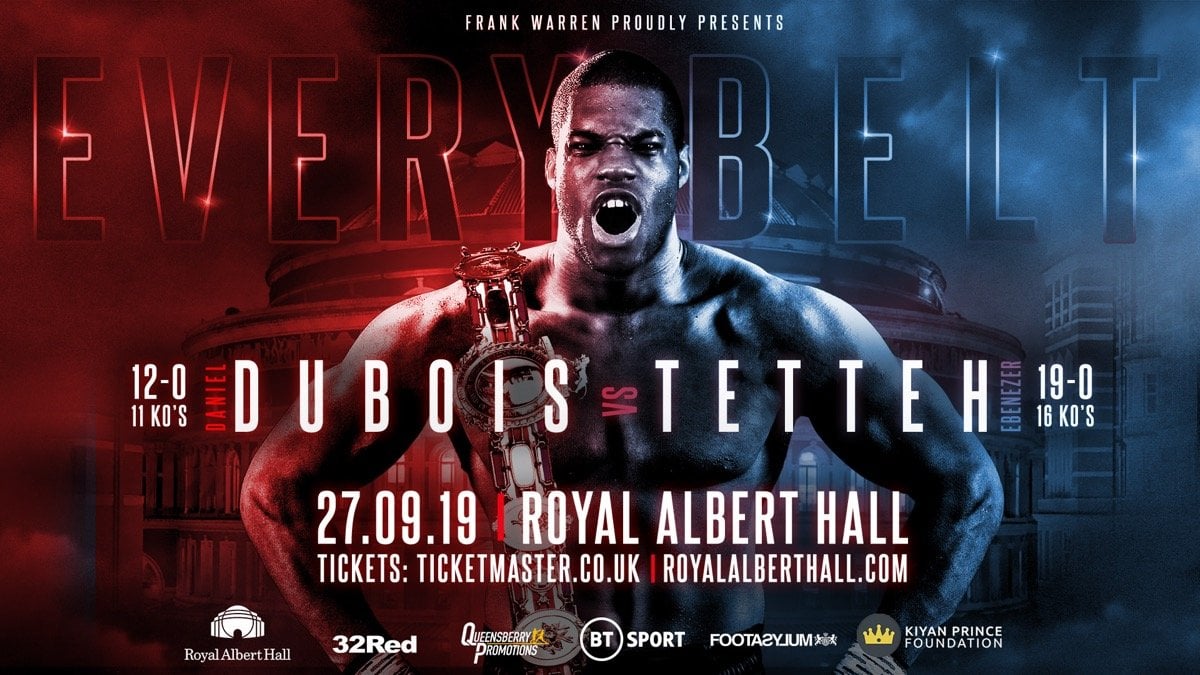 DANIEL DUBOIS and Nicola Adams will be lighting up London on Friday (September 27th) when both are in big fight action at the Royal Albert Hall, live on BT Sport.

The vacant Commonwealth heavyweight championship will be on the line when Dubois (12-0, 11KOs) faces Ghanaian Ebenezer Tetteh (19-0, 16KOs).

Today, Hall of Fame promoter Frank Warren hosted the final press conference ahead of the big night of action at the historic venue.

Here are a selection of quotes from the event:

“Daniel has had a fantastic year and gone from strength to strength. He is the best young heavyweight in the world in my opinion, and that is a burden I have put on him.

“We know he has power, but Daniel can box. He is not just a cumbersome clubber. And he is the best young heavyweight I’ve been involved in. He is a special young man.

“As my boxing mentor, the late Ernie Fossey said, ‘If you can’t jab, you can’t fight.’

“Good fighters have great jabs and Daniel has a great jab. It is a big comparison to make at this stage of his career, but Daniel has that Larry Holmes jab. I love seeing fighters who can jab.

“Nicola is our golden girl and I can’t wait for her first fight as a world champion, but this is a hard fight and I hope she comes through.

“Nicola is a legend with two Olympic gold medals. I want to see her come through this and be an active fighter.

“Archie is in title winning habits, an ambitious young man, but he has a tough challenge. It is going to be fireworks and great for the fans.”

“It is my job to come through in style. I haven’t really studied Tetteh. I just want to fight and win again.

“Every challenge brings something different and I get better each time I fight.

“I believe I am world class and it is only a matter of time before I am up there with the big names.

“I am a man on a mission and not going to be stopped. It will be fireworks on Friday and a devastating performance is coming.

“The Larry Holmes compliment is great to have especially from Frank. He has been in the business a long time and knows what he’s talking about.”

“I have watched Daniel v Lartey and Gorman and know what I have to do to beat him on Friday.

“And, I gave Lartey sparring and I am better than him. I can move and punch.

“I expect to beat Daniel. Lartey gave him a good fight but I will finish Dubois.

“I want to take the title home and be the first Ghanaian Commonwealth heavyweight champion.”

“I will be nervous on fight night, but it is good to be back. If I wasn’t nervous it would mean I am underestimating my opponent.

“Maria will stand in front of me and they are the best to face because they’re there to get hit.

“I have a lot of goals. I want to unify the flyweight division and this is the first step in the right direction.

“It means a lot to box at the Royal Albert Hall where my hero Muhammad Ali did. It is special.”

“Declan is a very good fighter and we all know he can box. I will adapt to anyone’s style and whatever he brings I will match.

“And I believe I’m a great fighter and they adapt to any style. I have done tests and I am bigger, stronger and quicker than 12 months ago.

“The fight will be how I want to fight and I have an answer to it all.

“He has been chinned and that must play on any man’s head. The WBO champion Jamel Herring has been mentioned as a future opponent, but I am not overlooking Declan.”

“I’m here to spoil the party. I am gonna come forward and put the pressure on him.

“Archie is a good boxer, rangy, switches and moves well. I’m not really worried about him because he hasn’t been tested. He beat Lyon Woodstock and Jordan McCorry who I don’t rate at all.

“No ifs or buts, I am becoming WBO European super-featherweight. I’m a crazy Irishman and here to fight.

“If he has overlooked me he is silly. I think it’s down to who has the best boxing IQ.”