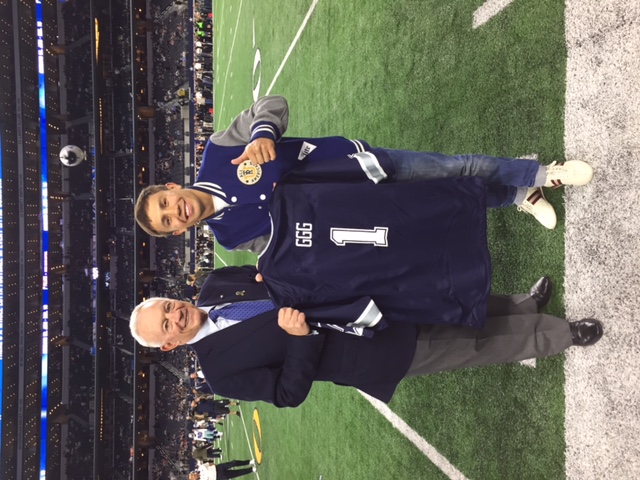 Dallas, Texas (November 9, 2015) Boxing Superstar, WBA/IBF/IBO and WBC “Interim” Middleweight World Champion Gennady “GGG” Golovkin, (34-0, 31KO’s) was presented with a Dallas Cowboys jersey on Sunday night by owner Jerry Jones prior to the start of the football game against the Philadelphia Eagles at AT & T Stadium in Arlington, Texas.

“The Dallas Cowboys organization really rolled out the red carpet for Gennady’s first visit to the stadium, “stated Tom Loeffler, Managing Director of K2 Promotions. “We were very impressed by the stadium and possibility of Gennady fighting in Texas in the future.”

Golovkin wil be joined by Loeffler and his trainer Abel Sanchez at two media events today in Dallas and San Antonio as outlined below.

Boxing Superstar, WBA/IBF/IBO and WBC “Interim” Middleweight World Champion Gennady “GGG” Golovkin, (34-0, 31KO’s) heads to Dallas, Texas this Sunday night, November 8 as a special guest of Jerry Jones and the Dallas Cowboys for their game against arch-rivals, the Philadelphia Eagles at AT & T Stadium in Arlington, Texas.

In his first trip to Texas, Golovkin along with his trainer Abel Sanchez and promoter Tom Loeffler of K2 Promotions will also host media roundtables in Dallas and San Antonio.

“This is Gennady’s first trip to Texas and we’re honored that the Dallas Cowboys reached out and invited him as a special guest of their game on Sunday night.” said Loeffler. “Gennady has always stated that he will fight anywhere and he’s looking forward to visiting Dallas and San Antonio towards having a future fight in either city.”

“We’ve known for a long time that Gennady has a huge fan base in Texas and as we’ve just returned from the WBC Convention in China, his international popularity has continued to rapidly increase.”

On October 17, Golovkin won the IBF Middleweight Title from David Lemieux in an eighth round stoppage in front of a sold out crowd of 20,548 at Madison Square Garden and watched by millions around the world.

“The victory over Lemieux was Gennady’s first world title unification and his immediate priority now is facing the winner of the Miguel Cotto/Canelo Alvarez bout in his next fight according to the WBC mandate.”