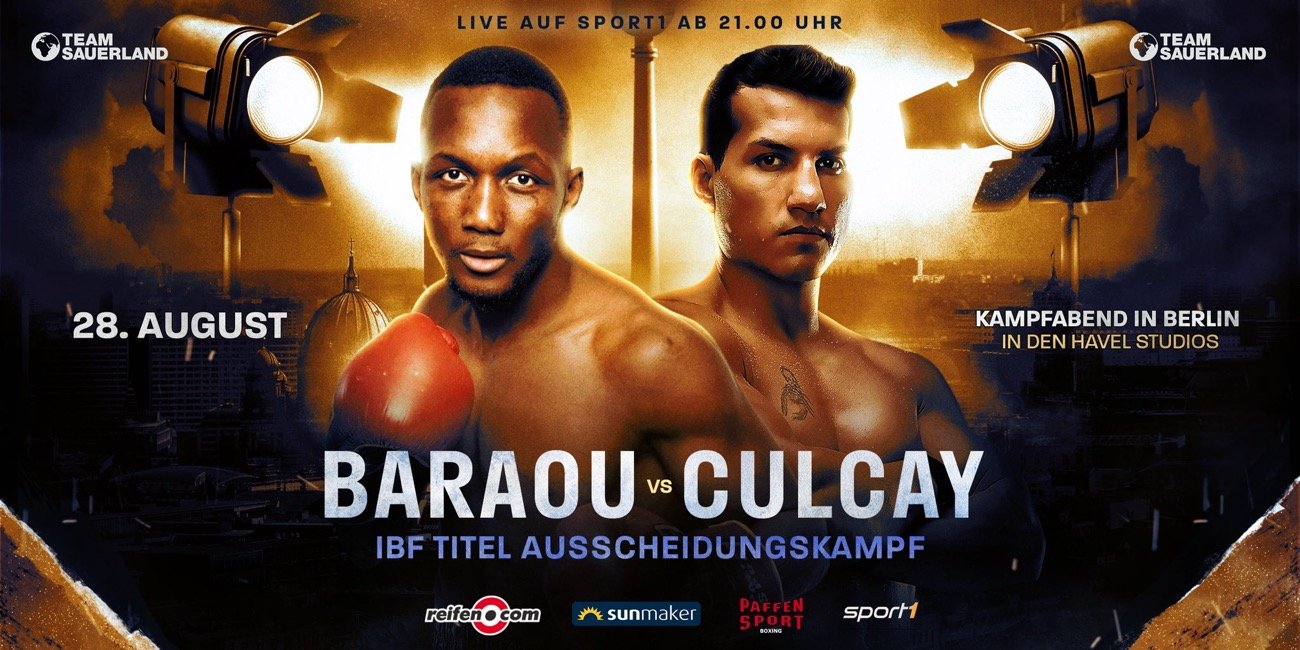 SPORT1 TV commentator and German boxing expert Tobias Drew on Culcay vs Baraou: “I was surprised that this fight was made! For Jack Culcay, the fight does involve huge risks. He is much further along in his career and more experienced than Baraou and a loss would have a serious impact on his career. If Culcay wins this fight, Jack would take his career to the next level. He has fought big names such as Demetrius Andrade and Sergiy Derevyanchenko and even almost beat them. When you look at these fights, you know what caliber Jack is. Jack wants to fight the best and that includes Abass Baraou.

If Abass Baraou wins, he would be catapulted forward in his career. In the HAVELSTUDIOS he can box freely because he has little to lose and everything to win. With Adam Booth he has one of the world’s best trainers and a sharp sword in his corner. But the sword has two edges: Does Booth already know his protégé well enough to lead him through this very hard fight?

This is what Tobias Drews predicts for the Saidi vs. Feigenbutz fight: “Vincent Feigenbutz still has great potential. It is important that Vincent organizes his career after his loss to Caleb Plant. And I believe that is already happening, because he is developing new ideas. One of them is to compete at middleweight now. Vincent has already boxed top fighters in his career and he is still young and hungry despite his almost ten years of professional experience.

However, Jama Saidi would not be the opponent that I would have chosen in his place!

Jama can box very well and he is a puncher, even if his KO % does not suggest that. He gets along better with boxer types like Feigenbutz than with Jack Culcay, against whom he suffered his only loss. Clearly, this will be a war!

My vote is fifty-fifty. …and the better shape of the day will decide who wins this fight.”

Culcay vs Baraou / Saidi vs Feigenbutz will take place on August 28th at the Havel Studios in Berlin  Because of Covid-19, there are no tickets available.

SPORT1 will broadcast the battle evening from the Berlin HAVELSTUDIOS live from 21:00 hrs on free TV and parallel in the 24/7 live stream on SPORT1.de.