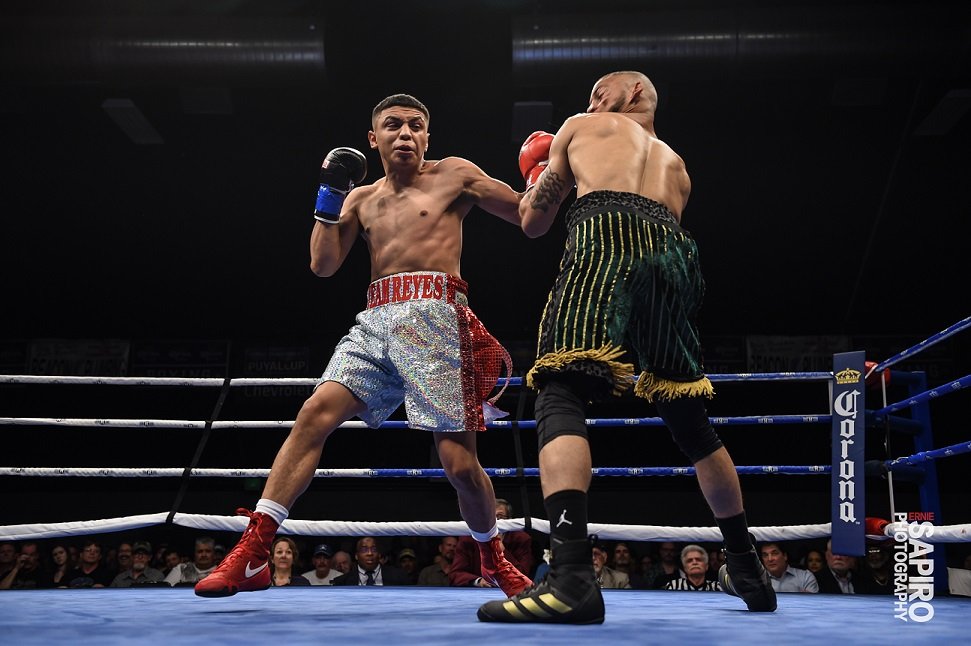 Cris Reyes predicted a victory via third-round knockout in his last fight.

His forecast failed to come true as he needed less than 2 minutes to put away his opponent.

The hard-hitting welterweight’s prediction was about the only thing that was off during Reyes’ main event debut in June because he looked about as impressive as ever in keeping his perfect record intact.

His dominating win over Lennard Davis, who entered the June 1 contest with just one defeat in 11 professional fights, at Battle at the Boat 121 turned out to be Reyes’ last bout as a teenager. He turned 20 just 18 days following the win.

As impressive as Reyes’ teen years were as a boxer, which were highlighted by a 2015 National PAL championship, a 2015 Junior National Golden Gloves runner-up and a pair of seconds at the Ringside World Championships, it’s easy to see why many believe his 20s are going to be far more rewarding.

Reyes will take his next step towards super stardom on Saturday, Sept. 7 when he squares off against fellow undefeated fighter Manuel Monteiro at Battle at the Boat 123 at the Emerald Queen Casino in Tacoma, Wash.

Both boxers will bring perfect 7-0 records into the 5-round contest with Reyes winning his last six fights by KO and Monteiro registering knockouts in every one of his appearances.

Read:  Teofimo and Kambosos set to fight at Madison Square Garden on Nov.27th

Just two years removed from high school, Reyes has looked razor sharp in 2019. In addition to his first-round KO of Davis, he also notched a victory by TKO over Abdul Kamara on March 3. Those wins came following a knockout of highly-regarded William Parra Smith on Oct. 27, 2018.

“Training camp has been good,” said Francisco Reyes, Cris’s older brother and trainer. “(Cris has been) able to spar with elite boxers which has helped Cris get to that next level.”

A native of Renton, Wash., Reyes was scheduled to fight in his first 10-round bout his last time out, but needed just 1:43 as he ended the contest with a devastating right.

Francisco Reyes’ expects more of the same against Monteiro.

“On September 7 (Cris will) show that once again,” Francisco Reyes said about Cris’s knockout power. “I was impressed by his power (in his last fight). I know he has power, but I think that every fight it gets better and better. We know Manuel brings an undefeated record with all his fight by KO, but we’re ready for that. Cris can box and he can stay in front of you and go at it. Our plan is to go in there and win. Regardless of what that takes. Cris is young and really hungry. I know he’ll come out on top. I predict a victory.”

In addition to the Reyes/Monteiro fight and the cruiserweight main event, Battle at the Boat 123 will also feature undercard bouts between undefeated heavyweights Nick Mills and Jon Jackson and a welterweight fight between Willie Gomez and Hamilton Ash.

Battle at the Boat 123 Card