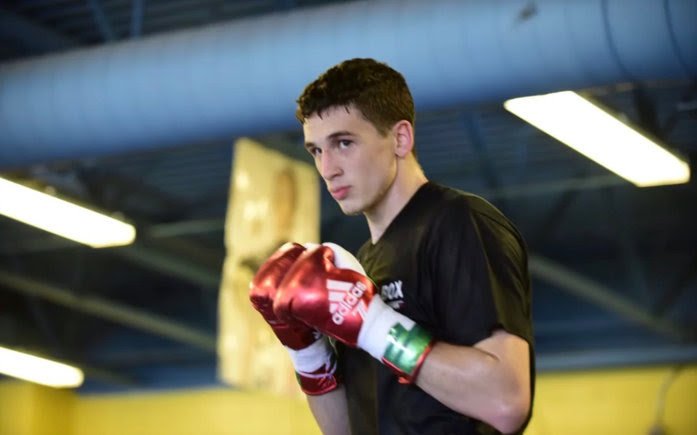 LaManna was last seen in action when he won the Vacant New Jersey State Championship by defeating veteran “Mighty” Mike Arnaoutis back in November of 2018. Since then, LaManna has had a number of big fight offers, none of which came about. “I was offered a opportunity to fight Jamie Munguia for the World Title and I jumped on it without getting into money but he was ordered to face his mandatory in the WBO, than I was going to fight Patrick Teixeira on the same card but my team and the promoter couldn’t come to a agreement. Now to top it all off, I was in line to fight Kell Brook in June on the AJ card but they turned that down as well and that was after I agreed to a low purse (in my opinion)” LaManna quoted. “So instead of sitting around and waiting, I’ve decided to get on one of my cards that we are doing in Virginia to stay active, stay busy and stay relevant”.

Heavyweight Contender Chazz “The Gentleman” Witherspoon (38-3 28ko) looks to continue his comeback trail to a world title appearing in a 8 round bout.

WBA #12 world rated Super Middleweight Derrick “Take it to the Bank” Webster (28-2 14ko) makes his first appearance in “The Mother of States” in a 8 round bout.

Local fan favorite Roger “RB3” Belch (12-1 8ko) headlines the undercard in a 6 round lightweight bout against a opponent to be determined.

Rising Jr. Middleweight contender Thomas “Cornflake” LaManna (27-2-1 9ko) wants to make his mark at one of the key players in the 154 pound division. “It’s my time now. I’ve remained silent and low key for for too long now. It’s time to fight forreal.”

Since turning Professional in early 2011, LaManna has compiled a record of 27 wins with just 2 defeats and 1 controversial draw, that took place last year when LaManna faced rugged and crafty veteran Gabriel “Tito” Bracero (24-3 6ko) in their 10 round crossroads fight for LaManna’s WBC FECARBOX Welterweight Title. Since then, LaManna bounced back with two solid wins including capturing the Vacant New Jersey State Welterweight Championship by defeating former World Title Challenger “Mighty” Mike Arnaoutis (26-11-2 13ko). LaManna’s next fight will be Saturday, February 9th in Norfolk Virginia at the Norfolk Masonic Temple. LaManna will be facing upset minded Dennis Knifechief (13-9 3ko) in his first fight at 154lb in over 3 years.

It hasn’t been a easy ride for LaManna, 27, who is from Millville New Jersey. LaManna along with his mother Debra LaManna started fast rising promotional company Rising Star Promotions in late 2015 when LaManna couldn’t get any fights on the local scene. “After I took my first lesson against Antoine Douglas, a lot of people wrote me off. My then half promoter Russell Peltz released me, I was getting criticized entirely too much and I just go tired of it. Thankfully I still had my long time promoter Mr. Vincent Ponte of Gulf Stream Promotions who believed in me and took a shot up until early 2017.” LaManna describes his TKO6 loss to Douglas as a lesson because it’s his belief that you never lose if you give it your all. Since that defeat, LaManna piled up a five fight win streak with three of them being on his own promotional card.

“I had to do what I had to do to get back in the picture. I fought for nothing, zero, nada, zip” LaManna said with a high pitch voice. LaManna also quoted “Fighting and risking your life for $0.00 actually sometimes costing me money…. You tell me how that looks and sounds. After I bounced back with five decent wins, I had to make my own deal with Eric Botjer and ROC Nation for my fight with Dusty Harrison fight because nobody else would. Call it what you want, you could of gave that fight to either of us or a draw but it is what it is that’s still my good friend to this day. I’m not looking for a medal or award, but I see other fighters getting PR and credit for coming up the hard way.. WHAT ABOUT ME? Training, working, promoting, making weight AND fighting all to make a dream a reality god willing in due time”. I had to do this sh*t nine times, evening hiring a team, I still was never able to reach my maximum potential in training camps but in my fights I would show the f*ck out because I was angry at my situation.”

In my opinion, being a fighter should require 100% focus, great rest, no drama and a strong team taking care of logistical and training needs. From this interview I did with LaManna, I could tell my the sound in his voice and tears in his eyes that this is far from his career story.

“No sh*t” LaManna said laughing. “I would do anything for my career to me east, sleep, drink BOXING and family but ultimately I wouldn’t change it for one simple reason. Weather I make it or I fail, I will always be able to say I did it my way. I guess it’s on a right path because the WBO has me rated number 13 in the World at 154, and prior to that they had me as low as number 12 at 147 when I was a Welterweight”. In the meantime LaManna will settle with respecting the fact he has to work graveyard shift to provide for his family while pursuing his boxing dream. “It’s definitely a struggle, waking up 3am, working until 12pm-1pm than having to go straight to the gym. I run on low fuel but too be honest the thought of me giving my daughter the world is what pushes me. After the gym I jet home to her, I shower/eat and get as much rest as I can after playing with her because I still have to do my roadwork around 10-11pm.”

My respect for LaManna has sky risen after this interview. In closing I asked Cornflake if he had any messages he would like to say: “It’s my time now. I’ve remained silent and low key for for too long now. It’s time to fight forreal. I fought my way up for $0.00, I want big fights at 154, I know for fact I’m a top player in the division, I just need my opportunity. I’m a promotional free agent and I’m self managed/funded.”