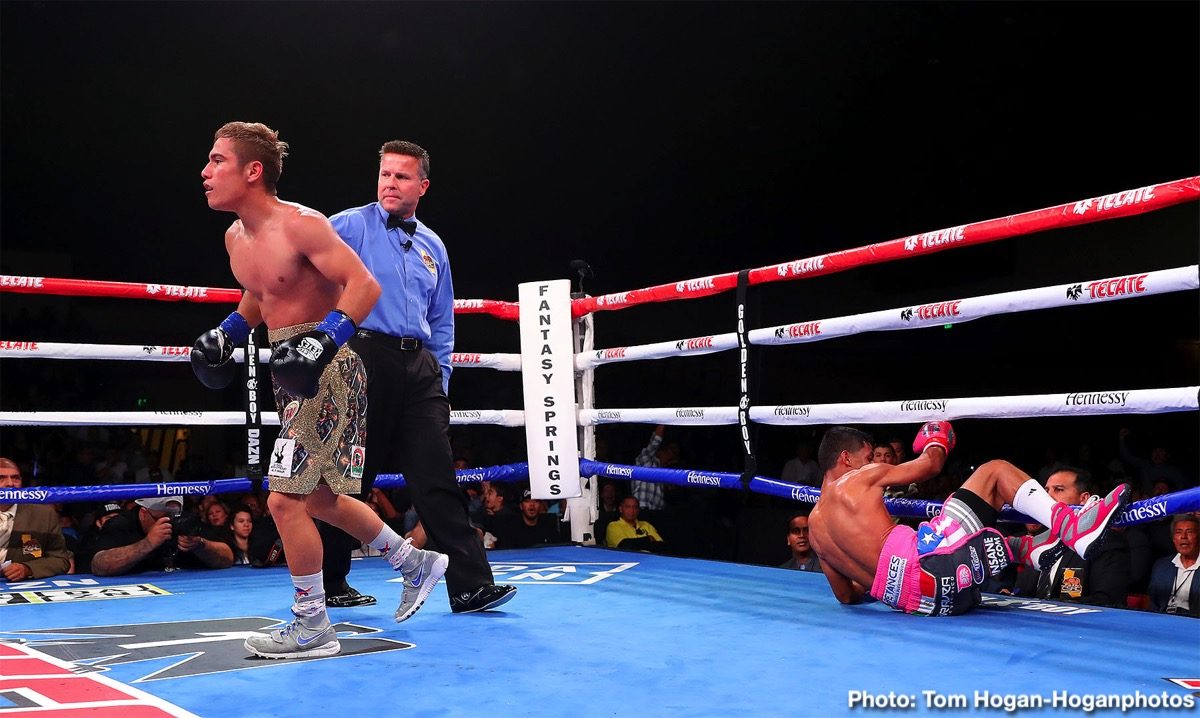 “It feels good. I was going for the head and the body was there and I took it. I’m here to stay at 137, it’s not a fluke, and I’m ready for the other champions.”

“Nothing I knew it was above my eye. It wasn’t getting in my eye. We were staying composed. I knew if I kept throwing my combinations I’d slow him down. I know I’m a hard hitter.”

“I thought he was getting up but he knew if he got up I was coming from him.”

“I’m here to stay, it’s not a fluke. I did this twice and you got to see the new and approved Andrew Cancio.”

“Well Rene Alvarado has been sitting there waiting patiently as the number one mandatory, and he’s has proven himself and he’s number one. He’s has been waiting long enough, so let me get my cuts healed up and talk to my team and promoters. I told them I don’t care who it is, Rene Alvarado, JoJo Diaz.”

“Yeah I’ll be back at work on Monday.”

“Look he’s a great champion and he showed that tonight.”

“I had an excellent training camp and he did his job. I have to check with my team and see if I should move up cause this division is small for me.”

“Look I was ready to get up and the ref decided to stop the fight, I wanted to keep going.”

“It was always my decision to have this fight be my last fight in this division. It was the risk I was willing to take in this rematch. Cancio did his thing tonight and now I have to make a decision.”

“The truth is I feel nice. It feels great to accomplish this. I worked very hard, and put a lot of effort into this.”

“To be honest I thought I was going to lose and thank god I landed that punch and won the fight.”

“No when I first dropped him I felt I could have stopped him, but I knew it was going 12 rounds.”

“This is victory means a lot and dedicate this belt to my family.”

“I’m a little disappointed. Sure he hurt me but not enough for the stoppage.”

“I would of used my jab more and use my distance more just like I did in the gym.”

“I would like to fight same opponent, or the other champions in the division.”

“In the first round he was a little slow so I was able to pick him apart. I knew it was going be a tough fight. He had a weight advantage and we knew that, but that’s why we worked the body, and eventually we knew that would set up the late KO. We continue to move forward.”

“Well I know every time that I was throwing my shot he was going to counter to the body. He’s a tough guy, and heavy hitter. I wanted to take my time, be patient. I knew it was going to go ten rounds, and that would set up at a late KO. The important thing is we got a KO and the win.”

“The jab is very important. We have a philosophy in camp that the jab is the most important thing in boxing. We switch to southpaw, we switch up the hands, a little light, a little hard, and stay unpredictable. That’s what we wanted to do, stay unpredictable and surprise him and set up the KO.”

“It was wonderful experience. Give it up for my opponent, he did a hell of a job, he kept on fighting after the knockdown, and he’s true warrior.”

“Well it’s an experience. After the knockdown I could have pushed it. I have true ability, and could of blasted him early. I decided to show a little bit more technique, be a little more calm in there, show my experience, and I gained some experience trying to break him down through the rounds little by little.”

“My corner is incredible. They articulated to me in the corner to exploit distance, keep my range, get him to fall in, shoot counters with right hands and right hooks, and roll off punches and big shots in between his punches.”

“Anybody, anytime, anywhere Blair! Anybody, every champion, I’m marking your days cause soon, very soon Blair “The Flair” Cobbs will be there. I’m taking you titles at 147!”