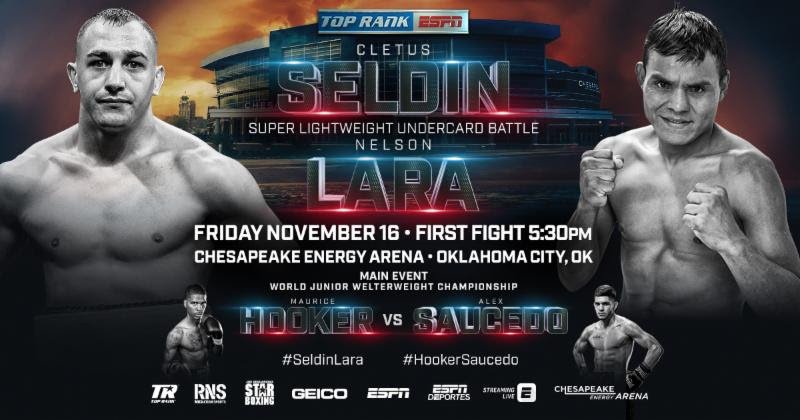 Oklahoma, and all of those tuning in on ESPN +, are in for a thrilling slugfest tomorrow at the Chesapeake Energy Arena. Long Island knockout artist, CLETUS “THE HEBREW HAMMER” SELDIN weighed in at a ready, 141.4 lbs , and Nicaraquan veteran NELSON LARA tipped the scales at, 142.4 lbs.

CLETUS “THE HEBREW HAMMER” SELDIN (Long Island, NY 21-1 17KOs) will be making his much anticipated return to the ring tomorrow (Friday 11/16) against NELSON LARA (Nicaragua 17-10 9KOs) live on ESPN+ at the Chesapeake Energy Arena in Oklahoma City, Oklahoma. New York’s hard-hitting warrior has his sights set on bringing his East Coast power out West to give the people of Oklahoma an unforgettable night of action.

Seldin-Lara will featured on ESPN + on the undercard of the MAURICE HOOKER vs ALEX SAUCEDO WBO Super Lightweight World Title Bout on ESPN.

Star Boxing’s CLETUS “THE HEBREW HAMMER” SELDIN (Long Island, NY 21-1 17KOs) will be making his much anticipated return to the ring on November 16th against NELSON LARA (Nicaragua 17-10 9KOs) live on ESPN+ at the Chesapeake Energy Arena in Oklahoma City, Oklahoma. New York’s hard-hitting warrior has his sights set on bringing his East Coast power out West to give the people of Oklahoma an unforgettable night of action.

“The Hebrew Hammer” has garnered a significant reputation in the boxing world for his devastating knockout power. With a knockout percentage of 74%, very few have been able to go toe-to-toe with Seldin and withstand his strength. Seldin’s violent punching power was evident in his fight against Mexican heavy-hitter, Roberto Ortiz on November 11th of last year at the Nassau Coliseum. Televised on HBO, the New York native put on a performance for the ages, relentlessly landing heavy shots that put Ortiz on the canvas multiple times. Seldin would go on to secure the win in the third round after the fight was stopped by the referee, giving him the TKO victory.

The impressive performance was the first of back to back HBO fights that saw Cletus Seldin become one of only three fighters in boxing history to appear on the network in consecutive months. That accomplishment has Seldin forever joining only hall of fame world champions Mike Tyson and Roy Jones Jr. with such distinction. Seldin didn’t fare so well in the second HBO fight, losing a decision to Yves Ulysse Jr, and as result of an elbow injury suffered in that fight, had to have Tommy John surgery which has led to his 10 month layoff.

The Hebrew Hammer’s passion for the sweet science has seen him fight through the surgery an rehabilitation and the Hammer promises that he will be in the best shape of his career. Seldin is hungry to get back to the top world ranking he once held.

Seldin will have to do it against Nicaraguan veteran, Nelson Lara. As boxing fans know, Lara is never an easy fight. He is a crafty veteran with a bag of tricks that makes it difficult for fighters to land flush shots. The Nicaraguan-born fighter promises he will do whatever he can to make it a tough night for Seldin and has stated Seldin “picked the wrong guy to make a comeback against”.

Friday night in Oklahoma City, former IBF Super Bantamweight champion Jonathan Guzman will be back in the ring for the 1st time since losing his title when he takes on Roberto Castaneda in a 10-round bout at the Chesapeake Energy City.

The bout can be seen live on ESPN+.

Guzman (22-1, 22 KOs) of Santo Domingo, Dominican Republic will be making his first start since dropping a razor think decision to Yukinori Oguni in Japan on December 31, 2016.

Guzman, 29 years-old won the title by stopping Shingo Wake on July 20, 2016 is looking for a win over Casteneda to get himself back in the rankings, on his way to another title shot, perhaps against WBO kingpin Isaac Dogboe.

This will be the 1st bout for Guzman under his new management team of El Matador Management.

“It’s been two years since I last fought and I can’t wait to get back in the ring. I’ve lost two years of my career because of promotional issues and now I need to make up this time,” said Guzman.

“I am facing a tough, strong and tall veteran fighter, but I have been training hard and I am ready for whatever comes.”

“I want to thank Top Rank for signing me to a promotional deal. They are one of the best promotional company around, and I know they will get me right back in to a world championship fight soon enough. I also would like to give special thanks to my manager Felipe Gomez from El Matador Management for making this happen for me.”

‘”I am excited to see Guzman back in the ring,” said Gomez. “It is sad to see a former World Champion with great talents sitting around for so long without fighting. He just needs to get one or two wins under his belt to get him right back in the mix with the top-ten super bantamweights.”

ESPN +:
Watch the electric night of fights, LIVE through ESPN +. Head over to www.ESPN.com and create, or login into an already existing account. Click the ESPN+ button on the top right corner of the screen (be sure that your window is wide enough for the button to show). Follow the instructions to subscribe to the service.