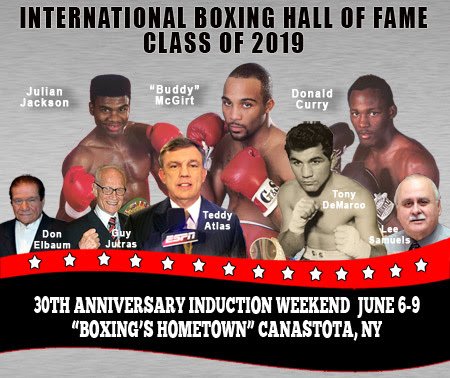 For boxers Donald “Lone Star Cobra” Curry, Julian “The Hawk” Jackson, James “Buddy” McGirt and Tony DeMarco; matchmaker / promoter Don Elbaum, referee / judge Guy Jutras, publicist Lee Samuels and broadcaster Teddy Atlas, their day in the sun is rapidly approaching. On Sunday, June 9th they will join boxing’s immortals when they are officially enshrined into the International Boxing Hall of Fame at the Induction Ceremony on the Hall of Fame Museum Grounds.

The Induction Ceremony will cap four-days of activities scheduled for the 30th Annual Hall of Fame Weekend, June 6-9th in “Boxing’s Hometown.”

“We are eagerly anticipating paying tribute to the incredible accomplishments of the members of the Class of 2019,” said Hall of Fame Executive Director Edward Brophy. “We look forward to welcoming them to Canastota to take their place in the Hall of Fame.”

“It is so exciting to think that the new inductees will be boarding airplanes in a few short days to make the trek to Canastota to receive boxing’s highest honor.”

The Class of 2019 also includes journalist Mario Rivera Martino, who will be honored posthumously in the Observer category. Inductees were voted in by members of the Boxing Writers Association of America and a panel of international boxing historians.

In addition to the Official Induction Ceremony, many events in “Boxing’s Hometown” of Canastota throughout the four-day celebration are planned, including a 5K Race / Fun Run, golf tournament, boxing autograph card show, VIP Cocktail Reception and the Parade of Champions. The Hall of Fame Weekend evening events include Friday night’s Fight Night at Turning Stone and Saturday’s Banquet of Champions. Both events will take place at Turning Stone Resort Casino.