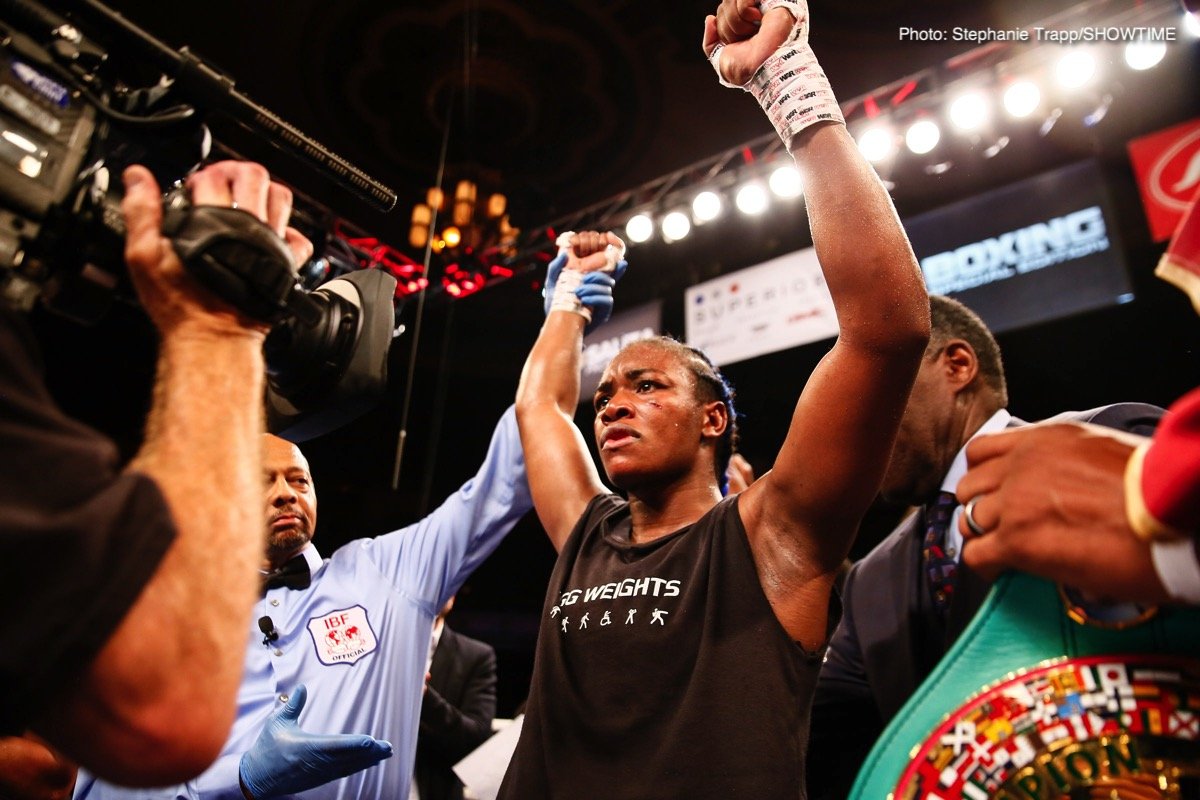 Two-time Olympic gold medalist Claressa Shields not only is spearheading a new wave in women’s boxing, she has developed into a true role model for countless youths.

Shields will be inducted into the USA Boxing Alumni Association Hall of Fame this Friday night in Salt Lake City, along with Class of 2018 members Roy Jones Jr. and, Andre Ward, as well as the late Emanuel Stewart and Tom Cleary.

“I feel honored,” Shields spoke about being inducted into the USA Boxing Alumni Association Hall of Fame,” I am only 23 years old and to be inducted into the USA Boxing Hall of Fame is a great honor, but also a shock to me. I believe I am worthy of any honor, but I know things take time, and I always thought I would put in the Hall of Fame at the age 40 or 50. This is a big deal to me and I feel so honored. Just to have my name mentioned alongside names of greats like Andre Ward and Roy Jones just really motivates me. I feel privileged!”

The pride of Flint, Michigan, Shields has already successfully parlayed her amateur success to the professional ranks, in which she is 7-0 (2), and the reigning unified (IBF, WBA & WBC) world middleweight champion.

Shields finished her amateur career with an incredible 77-1 (18 KOs) record, highlighted by her Olympic gold-medal-performances in 2012 and 2016. She hasn’t lost in the ring since 2012, when Savannah Marshall (England) won on points, 14-8, at the World Championships in China.

“USA Boxing came into my life as a two-time Junior Olympic champion,” Claressa explained her USA Boxing relationship. “The help from USA Boxing was so important: just noticing me as a young athlete and knowing I would be a strong young woman to represent the USA in the future; meeting Julie Goldsticker, who was a blessing for me as she helped me with a lot as a teenager, and just having Coach Abdullah, coach Al Mitchell, and coach Gloria Peek teach me different styles and how to use all my attributes. USA Boxing blessed me with a lot of knowledge and life-long friendships with all my Olympic teammates and Olympic coaches. My favorite coach, Kay Koroma, literally was with me the whole way through 2015-2016, helping me outside the ring with advice and inside the ring.”

Shields is one of the driving forces in women’s boxing today, carrying the torch handed off by American female boxing pioneers such as Christy Martin, Laila Ali and a few others.

“There is great change going on right now — me, Mikaela Mayer, Franchon Crews, Katie Taylor, Amanda Serrano and a few other women are carrying the torch for women’s boxing right now,” Shields explained. “Progress has been fast, every network has had a women’s fight on television this year, especially Showtime, on which I have boxed the main event four times. Women’s boxing can go far. I believe the day will come when we can be paid millions just like men.”

By opening doors and breaking down obstacles, Claressa has become a true role model for youngsters all over, in and out of boxing.

“It feels good to be a role model for them (females), and also for so many male boxers,” Shields noted. “Boxing is in a different era and I just want to make it easier for girls coming up, so when they turn pro, boxing will be closer to equality.”

“Claressa has one of the greatest stories in the history of amateur boxing,” said Chris Cugliari, USA Boxing Alumni Association Executive Director. “Her drive, commitment, talent, and character made her a USA Boxing and Olympic champion, leaving a legacy that will last for a very long time. She is a trailblazer for women’s boxing and has established her place as one of the most influential USA Boxing Alumni members of all time. The USA Boxing Alumni Association wants to thank her for inspiring the amateur boxing community and serving as a great role model for the next generation of champions.”

Created to champion a lifelong, mutually beneficial relations between USA Boxing and its alumni, –boxers, officials, coaches and boxing fans — The Alumni Association connects generations of champions, inspiring and giving back to USA Boxing’s future boxing champions, in and out of the ring.

Despite all the honors and accolades, she has so richly received, Shields hasn’t forgotten where it all started, and she’s still actively involved in USA Boxing.

“I keep in contact with a lot of the female athletes and give them advice if they ask me,” Claressa added. “I also went to Colorado for five days to be a motivator and keynote speaker for the Next Olympic Hopeful. After my career is over in about 15 years, I want to be a boxing trainer and lead the women’s team to more Olympic gold medals, if given the opportunity. I also want to be a school teacher and a counselor for youth.”

Shields, unfortunately, is unable to attend this Friday night’s Hall of Fame reception because she’s in deep training for her titles defense this Saturday evening on HBO, live from the StubHub Center in Carson, California, against Fenmke Hermans (9-1).

“Sadly,” Shields concluded, “I can’t be there but, if I was there, I would say: Thank you to USA Boxing for believing in me at the age of 16. It was an honor to represent America, not only once but two times in the Olympics! I thank Coach Billy (Walsh) for making me dig deep, by having to deal with his Irish ways and jokes, also for changing the culture of USA Boxing. A special thank you to coach Kay, also, I can’t count on my hands how many days we trained at 1 a.m., how many times I knocked on his room door and ran, how many times he has had to take my phone from me because I was crying or having a family problem. He is the coach I could tell everything to, and he also blessed me with his boxing knowledge and made me always feel secure in myself when he was in the corner. USA Boxing isn’t just staff – USA Boxing is family! Even though I’ve had a few words with Matthew Johnson and other staff, I thank them for being hard on me and making sure I handled my responsibilities. Love to all USA Boxing staff, I’m truly thankful.”

Claressa Shields is much more than world and Olympian champion, she’s a class act as well, exactly what’s so desperately needed today.