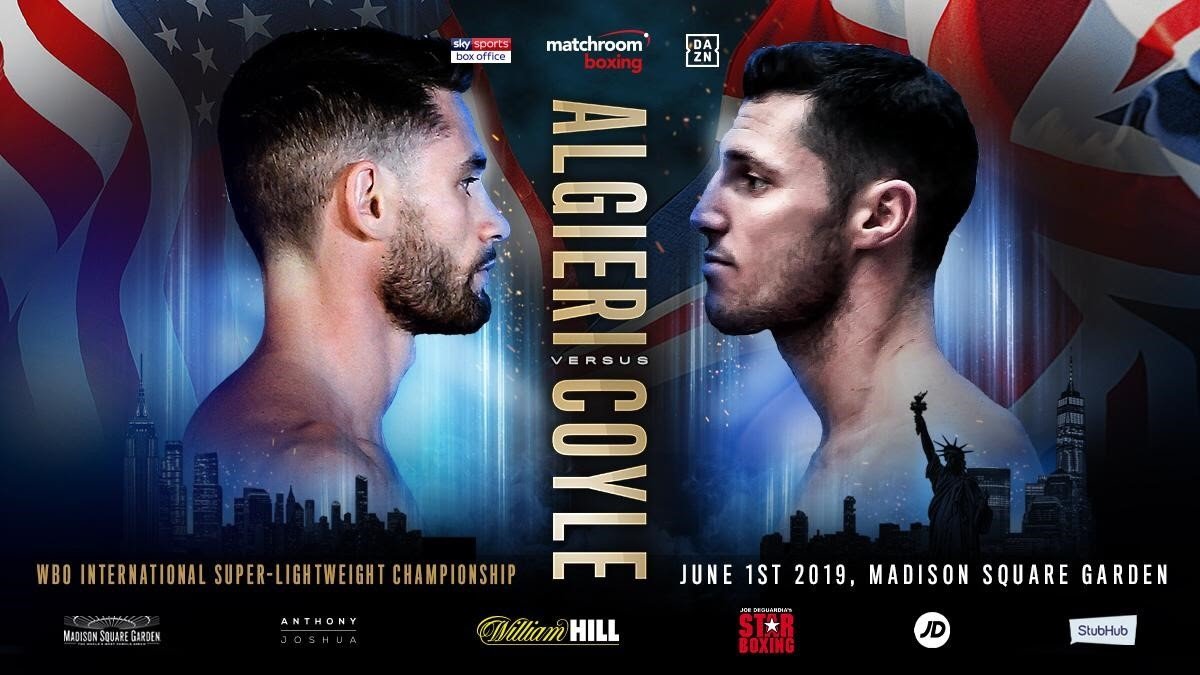 Chris Algieri and Tommy Coyle will clash in a crossroads showdown on Saturday June 1 at Madison Square Garden, New York, live on DAZN in the US and Sky Sports Box Office.

Algieri (23-3 8 KOs) puts the WBO International Junior Welterweight title on the line that he landed in January with a hard fought win over Daniel Gonzalez at the Theater at MSG. The former WBO World ruler made his return to the ring on his Huntington, NY home patch in November following two and a half years out of the ring, beating Angel Hernandez over ten rounds before moving on to land the strap he defends.

Coyle (25-4 12 KOs) is fresh from his exciting US debut in Boston in October, sharing ten now trademark back-and-forth rounds with Ryan Kielczweski to win on points over ten. ‘Boom Boom’ moves up from Lightweight where he was Commonwealth king in April 2018 after stopping Sean ‘Masher’ Dodd in Liverpool inside six.

Algieri and Coyle lock horns on the undercard of Heavyweight kingpin Anthony Joshua’s USA debut against Andy Ruiz knowing that the winner will be in the frame for a potential World title shot against WBO champion and Matchroom Boxing USA and DAZN star Maurice Hooker – and both men know that the stakes are high for their respective careers.

“I’m very excited to be fighting once again at The Mecca of Boxing, Madison Square Garden on June 1,” said Algieri. “I know that Tommy Coyle is another tough test for me and that a victory will bring me one step closer to another World title fight.

“I’d like to thank my entire team for making this possible and for their total support of my quest to once again become a World champion.”

“I’m absolutely delighted to be boxing on such a huge event at Madison Square Garden,” said Coyle. “It’s a dream come true. Fighting in America is one thing, but fighting at the mecca of boxing against a former World Champion in Chris Algieri is just unbelievable and I’m so up for it.

“I’m expecting a Gatti vs. Ward style fight, I really am. I know how tough Chris is, you’ve only got to watch him in the Provodnikov fight, I’m not sure if he broke his eye socket or not but he just gritted his teeth and battled on. I think we’re both cut from the same cloth. It can only go one way and I think that’s a war.

“I honestly believe that this fight has come at the perfect time for me. It’s like I’m having a rebirth in my career and I’m probably performing the best I’ve ever performed in the gym. If I come through this fight successfully there could be a World title shot on the horizon for me.”

ALGIERI: I STILL FEEL LIKE PART OF THAT BELT IS MINE

Chris Algieri hopes that a win over Brit Tommy Coyle at Madison Square Garden in New York on June 1 will move him a step closer to a shot at WBO Super-Lightweight World Champion and Matchroom Boxing USA stablemate Maurice Hooker.

Algieri (23-3, 8 KOs) puts his WBO International title on the line for the first time against former Commonwealth Lightweight king Coyle, live on DAZN in the US and Sky Sports Box Office in the UK, knowing that a win could land him the opportunity to reclaim his WBO World title against reigning champion Hooker.

The New York warrior battled back from a pair of first round knockdowns to outbox and upset Ruslan Provodnikov to land the WBO crown in 2014 but was forced to vacate his belt when he stepped up to Welterweight to face modern legend Manny Pacquiao for the 147lbs title later that year.

“Winning this fight, which is all that me and my team plan on doing, puts us in a very good position for some of the top guys in the division,” said Algieri. “Potentially a World title fight with the current WBO World Champion Maurice Hooker who holds the title that I never lost in the ring. That’s what I have in my sights.

“I still feel like part of that belt is mine. That’s not to take anything away from the current champion Hooker, he earned it and he fought his ass off to get to the position that he’s in. I feel like I need another crack at that title because essentially part of it is me.”

Coyle produced a typically bullish performance as he outfought Ryan Kielczweski over ten rounds on his American debut in Boston in October last year. ‘Boom Boom’ is renowned for his toughness but Algieri says he is prepared to take the Hull fighter into the trenches to get the win next week.