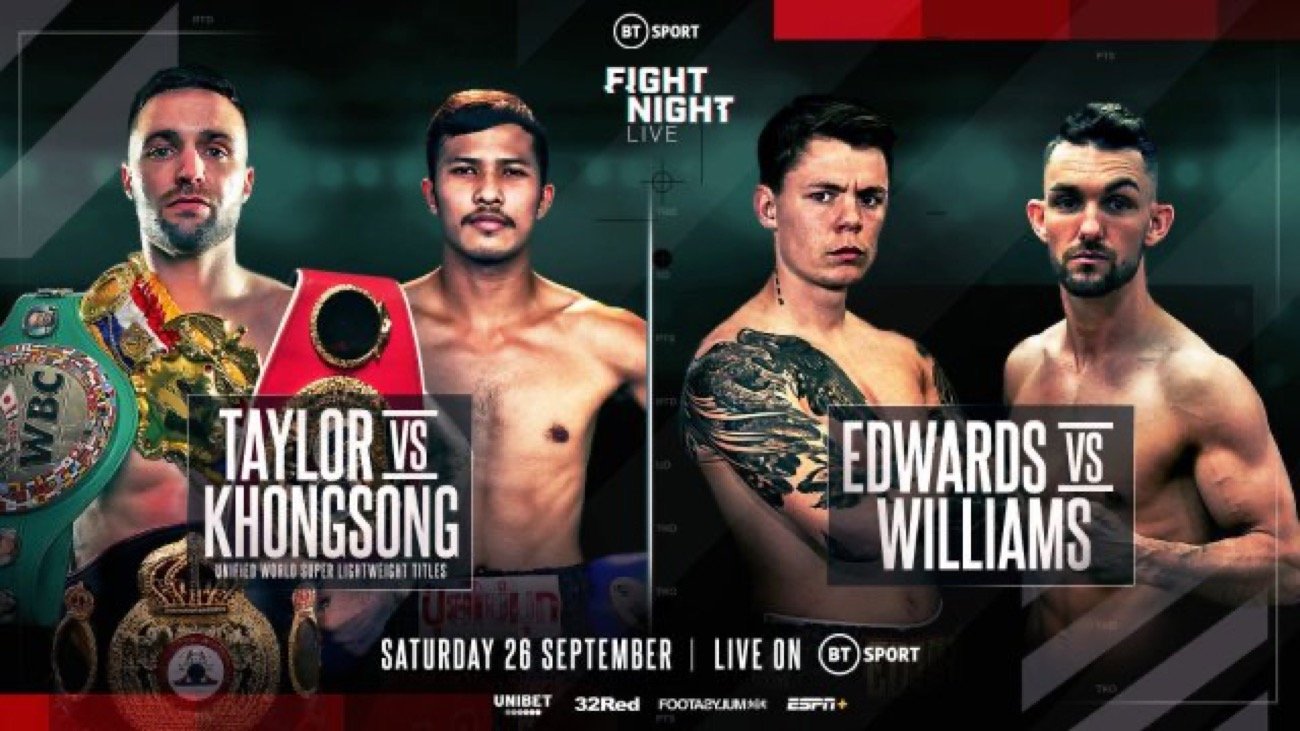 IBF and WBA champion Taylor (16-0, 12KOs) had been due to meet Thai Khongsong (16-0, 13KOs), his IBF mandatory challenger in May, but the COVID-19 pandemic forced a delay to his contest against the heavy handed challenger.

The Edinburgh star heads another talent stacked card promoted by Frank Warren for Queensberry Promotions and Bob Arum for Top Rank, with the return of Edwards a big attraction.

Edwards (15-1, 6 KOs) moves up to bantamweight after relinquishing his world crown and faces Wolverhampton’s Kyle Williams (11-2, 3 KOs) in a non-title ten rounder.

It will be his first fight since a no-contest against Julio Cesar Martinez a year ago and his debut under Hall Of Fame promoter Warren who he joined recently.

The Croydon man said: “I’m looking forward to getting back in the ring. It feels like it’s been a long time coming.

“I have had 12 months out, but I have developed more than I did even when I was a world champion.

“My life away from boxing could not be any better. I am settled in a new home, I have got engaged and in January I will become a Dad.

“I have never been in such a good place mentally, physically and emotionally.

“Obviously I am not world class yet at Bantamweight and that might take time, but Kyle is a very decent opponent after so long out.

“I’m looking forward to putting on a show against a great fighter. This fight is a fantastic domestic clash.

“It would be great to have fans there, but I’ve had similar experiences as an amateur. I once boxed in a 30,000 capacity arena in Azerbaijan with 20 people there at a World Championship qualifier.”

Fast emerging Super-Middleweight Hutchinson (11-0, 7 KOS) will challenge for his first professional title with the vacant IBF European crown on the line, should he come through his bout tomorrow night on the undercard of Daniel Dubois vs Ricardo Snijders.

There will be a third title at stake when Joyce (12-1, 9KOs) makes the first defence of his WBO European Super-Bantamweight crown against Spain’s Ionut Baluta (13-2, 2KOs) over ten rounds.

Warren said: “Josh’s fight is a high end world title battle, and yet again we have delivered with brilliant supporting fights.

“I was very excited to sign Charlie who is a fighter I have always rated and enjoyed watching even when he wasn’t on out cards.

“I promised him that he would get the chance to become a two-weight world champion and this is the start of the journey for him. He is coming back at Bantamweight, but he could also do Super-Flyweight if the opportunity came.

“He has mixed with the best in the world and that is where Willy Hutchinson is heading. I have real faith that he will go all the way at Super-Middleweight and become part of Britain’s rich history in the division.

“Everyone at my office has been working hard and I’m delighted with what we’ve delivered for fans on these behind closed doors shows.”

There will also be a four round Super-Welterweight match between York’s George Davey (2-0) and Blackpool veteran Jeff Thomas (12-7-3, 1 KO). Northampton Super-Lightweight Ethan James (3-0) is also in action.