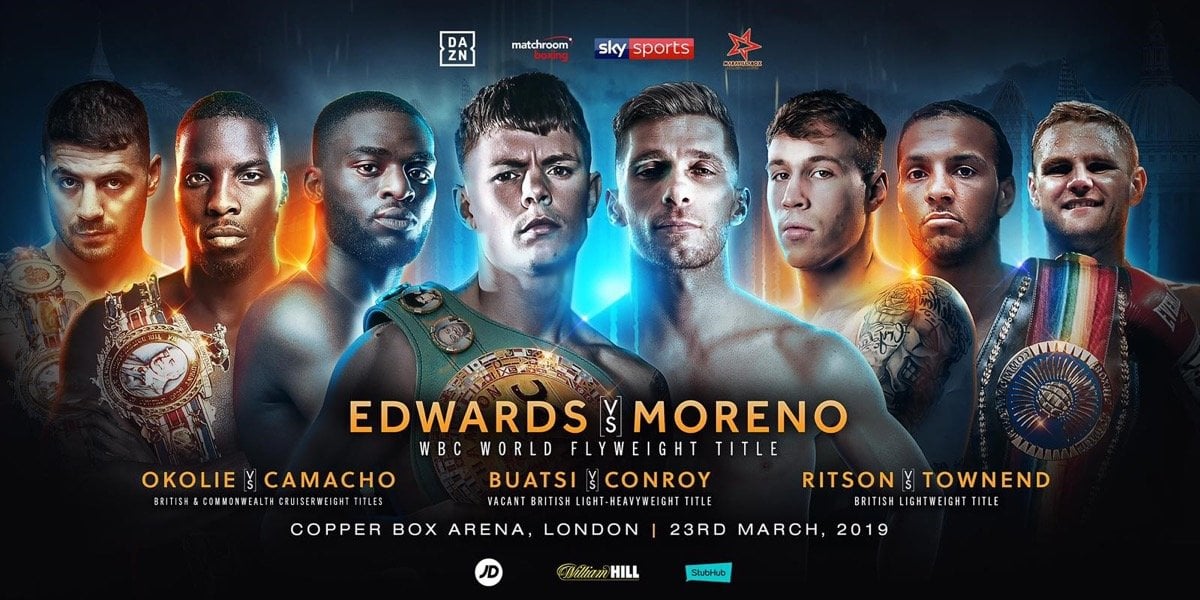 Charlie Edwards will make the first defence of his WBC Flyweight World title against Angel Moreno on a huge night of boxing in the capital at the Copper Box Arena on March 23, live on Sky Sports in the UK and DAZN in the US.

Edwards ripped the famous green belt from Cristofer Rosales on an emotional night at The O2 in London in December, outclassing the Nicaraguan with a masterful display to take a well-earned unanimous decision.

The Croydon man, having lost out in his first bid for World honours against John Riel Casimero in 2016, was overcome with joy after fulfilling his childhood dream, and is excited to begin life as a World Champion against Spain’s Moreno.

“Moreno is a very tough and game fighter,” said Edwards. “He’s a mature man and he doesn’t shy away from any opportunities, he’s going to come to try and steal my title from me. This is a fight that I’m very confident of winning and a fight that I can look really good in. I’m looking forward to getting back in the ring with him, I sparred him ahead of the Casimero fight but I’m a completely different animal now.

“This is only the beginning, this is a new chapter in my career and this is where the real hard work starts. I want to be an active World Champion, I want to be in the ring fighting and getting better and pushing myself. I’m not in this game to take part, I want to be a multi-weight World Champion. I look forward to taking my first steps as a World Champion and defending my belt on March 23.”

Croydon’s fast-rising Light-Heavyweight star Joshua Buatsi takes a significant step up when he takes on the inform Liam Conroy for the vacant British title in just his tenth fight. Buatsi blasted out Renold Quinlan at The O2 in December to bring up his third successive stoppage win inside the opening round, but ‘JB’ expects a tougher night against former English Champion Conroy.

“This is a good benchmark to see where I’m at,” said Buatsi. “My team see me day in day out in the gym and this is the title they feel I’m ready for. Liam has won his last five fights by knockout and he’ll be heading into the fight full of confidence.

“There’s a good title at stake and he knows there’s a big reward if he beats me. For me, it’s a big stepping stone and another box to tick on my way to the top. This is an important fight for my career and I need to get the belt to move on.”

“There’s plenty of hype around him but he deserves it because he trains hard and has already proved himself at the Olympics. I haven’t got the name he’s got but I’m looking to change that come fight night.

Cruiserweight rivals Lawrence Okolie and Wadi Camacho finally get it on in an all London affair, with the British and Commonwealth titles on the line. ‘The Sauce’ picked up the Lonsdale belt against Matty Askin at Wembley Stadium and puts his title on the line for the first time against the Canning Town ‘Machoman’.

Lewis Ritson defends his British Lightweight title against ‘The KO Kid’ Andy Townend in a guaranteed barnburner. The Geordie favourite is determined to return to winning ways after suffering the first loss of his career at the hands of Francesco Patera in October.

“This is a great show,” said Eddie Hearn. “A new hero of British boxing defending his World title in Charlie Edwards, with three brilliant British title clashes on the undercard. Everybody resonated with the story of Charlie Edwards after his memorable performance at The O2 in December. He makes his first defence of his title against seasoned pro Angel Moreno.

“Joshua Buatsi fights for the British title against the inform Liam Conroy, which is a significant step up. Lawrence Okolie finally gets the chance to fight Wadi Camacho for the British and Commonwealth titles after the all of the bad blood. Lewis Ritson returns from his disappointing defeat to defend his British title against big-punching Andy Townsend in what will be a brutal shootout, and there’s plenty more to be added to this stacked card.”

Liam Conroy wants to put Barrow-in-Furness on the map when he clashes with rising star Joshua Buatsi for the vacant British Light-Heavyweight title on March 23 at London’s Copper Box Arena, live on Sky Sports in the UK and DAZN in the US.

The former English Champion heads into his showdown with 2016 Olympian Buatsi in the form of his life having stopped his previous five opponents. Despite his impressive run of form, the 26-year-old will enter the ring as a big underdog – a tag that he thrives off.

“Being an underdog makes it much sweeter when I win,” Conroy told MTK Global. “I feel like I’m ‘The Upsetter’ because I feel people always doubt me. This is what me and my team do. Myself and my trainer Johnney Roye come down, travel wherever, upset some people and then we go.

“My fans from Barrow-in-Furness will make some noise on the night. There may not be loads of them with it being so far but they’ll make themselves heard. We’re a proud bunch of people. Everyone thinks of us as being out in the middle of nowhere and there not much being there so I’m glad to be putting Barrow on the map in some way.

“I want to make Barrow proud and stay up there in those big fights as a British Champion. I want to put a British title in my son’s bedroom. This has been my goal since day one. This is a massive fight but I think it’s been a long time coming. I won my British title fight eliminator in 2017 and I’ve just been working relentlessly since.”

Buatsi recorded his third straight first round knockout win when he demolished Renold Quinlan at The O2 in December. Many are already tipping the Croydon talent to become a future World Champion, but Conroy is convinced he will derail the hype train in East London.

“There’s plenty of hype around him but he deserves it because he trains hard and has already proved himself at the Olympics. I haven’t got the name he’s got but I’m looking to change that come fight night. I’m going to give it everything that I can and keep on going relentlessly till the final bell. I won’t stop until I have that belt.”

Shannon Courtenay is ready to announce herself in the professional ranks after calling time on a stellar amateur career that saw her win gold at the 2015 Haringey Box Cup and pick up the Southern Area Featherweight title in 2016.

The Watford Bantamweight makes her long-awaited pro debut at London’s Copper Box Arena on March 23, live on Sky Sports in the UK and DAZN in the US, and believes now is the perfect time to begin life in the paid code as she sets out on her journey to become a World Champion.

“Now is the perfect time to turn pro, 100 per cent,” said Courtenay. “Katie Taylor is leading the way over here at the moment and you’ve got Claressa Shields and Christina Hammer fighting soon. Women’s boxing has completely changed over the past few years and it’s getting bigger and bigger, that’s why I’m turning professional now. It’s only right that I strike while the iron is hot.

“I have a pro style and I’m confident that I’ll adjust to the pro game quickly. I’m ready to put my own name out there, not just in women’s professional boxing but all of professional boxing. I want to make a big name for myself and it all starts at the Copper Box Arena on March 23.

“I’m training with Adam Booth and Charlie Beatt now and they’re both incredible coaches. Adam’s got a fantastic track record of numerous World Champions like David Haye and George Groves. He’s trained the best and hopefully I can follow in their footsteps.

With men’s WBA Super, IBF, WBO and IBO World Heavyweight Champion Anthony Joshua OBE coming from just around the corner in Watford, Courtenay has seen the levels of support he has received from his hometown fans and hopes they will get behind her in the same way.

“I’ve known Joshua for quite a few years now and it definitely makes you feel like anything’s possible. The great thing about it is you see how much Watford has got behind him. I really hope they can do the same with me. If I can get even half the support he’s got it will only propel me to bigger things.”

Courtenay makes her pro debut on a huge night of boxing at the Copper Box Arena.