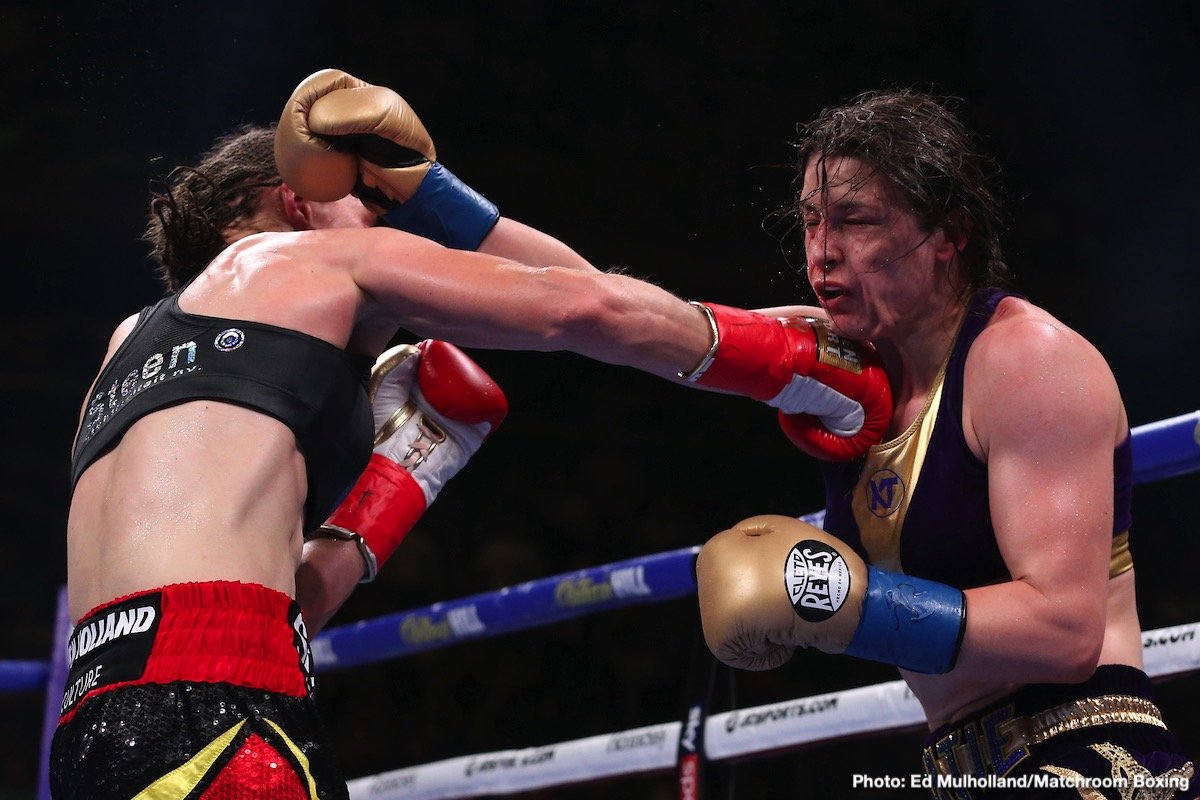 Ireland’s Taylor secured a narrow and controversial majority decision over valiant Belgian Persoon at Madison Square Garden at the weekend to add the WBC crown to the IBF, WBA and WBO lightweight straps.

As she prepares for her WBC final eliminator against Anisha Basheel on #MTKFightNight at York Hall on June 28, prospective challenger Cameron (10-0, 7 KOs) was an enthralled spectator.

Cameron said: “I had it as a close fight but thought Delfine edged it and it was a bit of a poor decision. I think Delfine was catching Katie with cleaner shots and should’ve got the verdict.

“Taylor is an amazing boxer. She’s great to watch but to be honest, I was more impressed with Delfine. She was on Taylor constantly, throwing and pushing Katie around. It was very impressive.

“They could do a rematch one day because it was a great fight. It was probably the best women’s fight I’ve ever watched. Katie kind of owes Delfine that rematch. If it doesn’t happen, it’s bad.

“Having watched that, I think my style would be a massive problem for Katie. Delfine comes looking for war and has a high work-rate, but I’m more accurate and pick my shots better.

“That fight was fight of the night on that show. It’s great to see because it shows how far women’s boxing has come. It was incredibly entertaining.”

Undefeated prospects Daniel Egbunike and Martin McDonagh face off over 10 rounds at super-lightweight while the likes of Donovan Mortlock, Sam Gilley, Jack Ewbank and Bradley Haxell bid to gain exposure on the undercard.

Lee McGregor is confident of elevating himself to world level inside a year as he prepares to defend the Commonwealth crown on #MTKFightNight on June 22.

The talented 22-year-old bantamweight (6-0, 5 KOs) takes on fellow Scot Scott Allan (9-3-1) – live on ESPN+ in association with Top Rank – and is already eyeing a clash with another compatriot in British champion Ukashir Farooq on his way to the top.

McGregor said: “It’s a dream to be headlining my own show and defending my Commonwealth title live on ESPN+.

“It’s unbelievable what MTK Global is doing for Scottish boxing but it’s not just here; it’s all over the world.

“I believe the partnership between myself and MTK Global is going in one direction and that’s right to the very top. I’m very happy now.

“My focus is well and truly set on getting myself to the pinnacle of this sport and with MTK Global behind me, I believe it’s only a matter of time.

“If it was up to me, I would fight for a world title in my next fight. That’s my mentality. I’m a born fighter. Luckily I have great people behind me so when the time’s right, I’ll be raring to go.

“Realistically, a year from now I’ll fight for a world title.”