Channel 5 and Spike have teamed up to bring you a bumper fight weekender from Friday night on the 12th June through to 13th June which will KNOCK YOU OUT!

We start on Spike with highly rated World Champion Erislandy Lara defending his title against Delvin Rodriguez LIVE on Friday night, 12th June at 2am (morning of Saturday 13th June) in the Spike UK debut of the brand new boxing series, Premier Boxing Champions. Polish heavyweight superstar, Artur Szpilka will also be on the bill. He’s become a Chicago favorite after consecutive wins in his last two fights.

Saturday 13th June is a jam packed fight night with the full undercard of Live International Boxing from the Action Sports Arena in Bristol on Spike from 7:30pm. Bob Ajisafe from Leeds tops the bill as he goes into action for the vacant Commonwealth Light Heavyweight Championship over 12 rounds.

Then at 10:00pm the action moves to Channel 5. Saturday night is title fight night, as Channel 5 presents live coverage of the bout between Lee Haskins and Japanese star Ryosuke Iwasa, as they compete for the IBF Interim World Bantamweight Championship. Local lad Lee Haskins is the current European bantamweight champion and a former British and Commonwealth super-flyweight champion. This is the 31-year-oldʼs first shot at a version of the world championship and one that he has been working towards for 12 years.

Then for those viewers still with a fight in their belly, the action continues on Spike with BAMMA where Mark Godbeer and Paul Taylor battle it out for the Heavyweight title from midnight.

Head of Channel Management Craig Morris said: “We are excited that we can bring these international boxing and MMA events to the UK audience for free. Channel 5 and Spike will be your destination for top fighting events across the year.”

One commonwealth championship, two world titles and one MMA Heavy weight title – all free to air. All weekend across Spike and Channel 5. 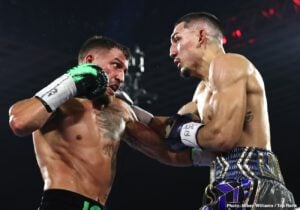