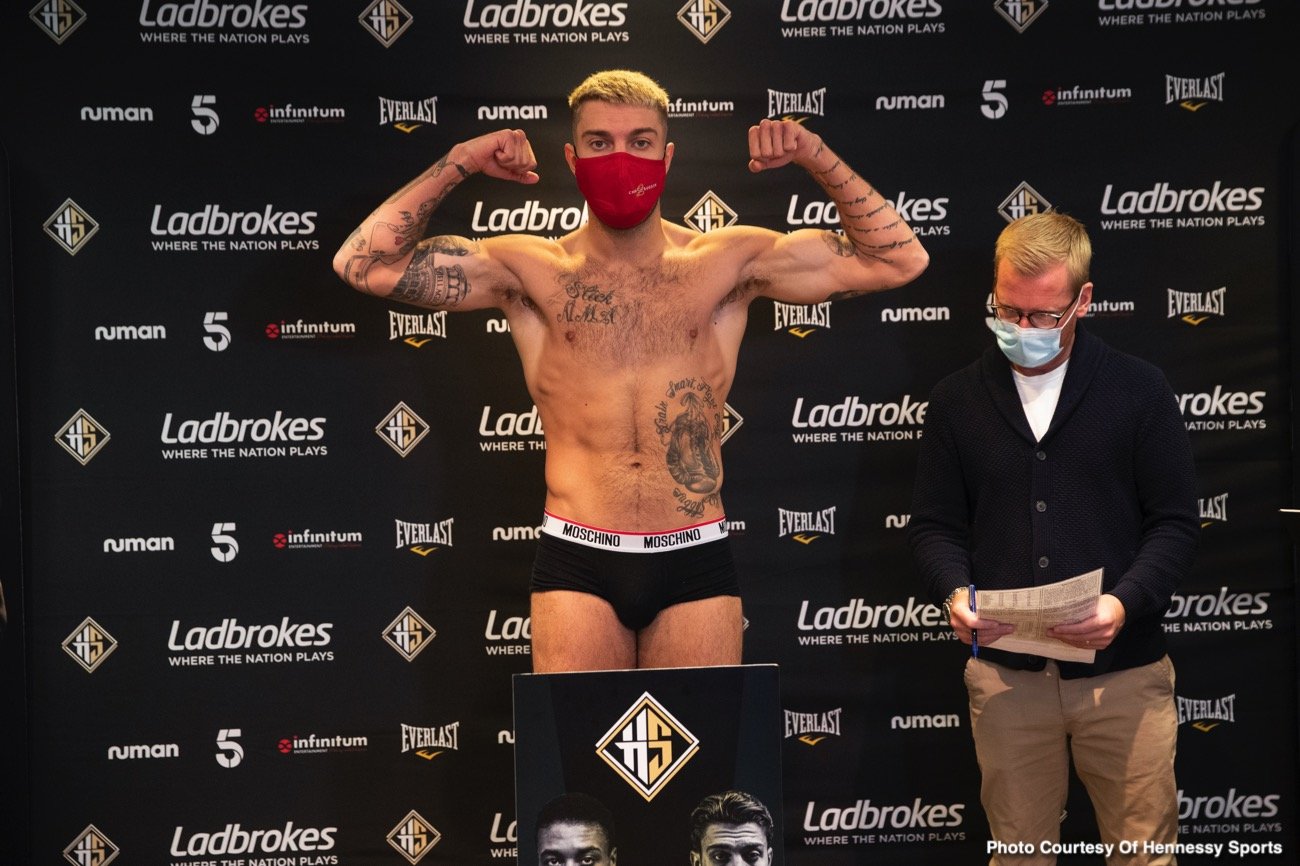 Tonight at a purpose built TV production studio in Redditch, the 26-year-old one-time world kick-boxing champion challenges 6ft 6in Birmingham tower Shakan Pitters in an East v West Midlands derby that has got the diehards drooling.

‘Fighting for the British title live on Channel 5, it doesn’t get any better. The Lonsdale is the best belt and I want to earn the right to have a photo with it wrapped round my waist,’ chirped the Nottingham-born ‘2Slick’ who cemented his worth by upsetting ex Commonwealth 12st king Luke Blackledge, then holding world rated Craig Richards to an eight round draw in the second half of last year.

‘The opportunity may have come sooner than expected but it’s definitely not too soon. Win this and I’m on my way.

‘We got an inkling (original co-challenger Craig) Richards might pull out so I was put on stand-by anyway. But I’ve been preparing for this since I was five years old, not just eight weeks.

‘Though I’ve not had a 10 rounder yet, I think the Board considered the calibre of my recent opponents and determined I was more than able.

‘I always keep myself in shape but I’ve trained as hard as I ever have. This has given me an extra buzz. Besides, I enjoy challenging myself. I’m really excited to test my skills against another good fighter. I like being the underdog, proving people wrong.’

Strongman Sugden, who hails from one of the nation’s most formidable fighting families, suggests that his substitution actually enhances the clash for the vacant crown.

‘This is a far more exciting fight for the fans than Pitters v Richards would have been. At some stage, it’s gonna light up!’ claims the former K1 star whose younger brother Regis is an undefeated pro welter.

Unbeaten co-challenger Pitters, the sky-scraping English champion, will present the sternest examination of Sugden’s formidable fighting credentials but John Costello, the Brummie who coaches Chad in tandem with his ex-world kick-boxing champion dad Dean Sugden, is confident that he is piloting the better machine.

‘Shakan’s a nice lad, a gentleman, who uses his physical attributes well. He’s very long behind his front hand then walks you on to his right,’ assesses Costello who steered Swindon’s Jamie Cox to a world super-middle title challenge.

‘But Shak came to boxing late whereas Chad’s from a pedigree fighting family. Fighting’s not in Shak’s soul, like it’s in Chad’s soul. This is totally the wrong fight for Pitters. Chad’s done very well against tall lads before in the kick-boxing and has a huge advantage physically in this fight. Chad’s unpredictable with a great sense of distance and good positioning. Shak won’t have dealt with anyone like Chad before, trust me.’

Qualified personal trainer Chad knows that he’ll have to deliver a career best effort if he is to get his hand raised.

‘But I fight different to most. Others attacked him in straight lines, I’ll be coming in at angles. Let’s see how he deals with that. And let’s see how mentally strong he is. I came through against Richards after breaking my nose in round two. I’ve been knocked down in the kick-boxing and prevailed. I’ve dealt with adversity. I’m war tested. Is Shakan? He’s not been the places in the ring that I have yet. I’ll take him there tonight.

‘Shak’s a freak at the weight but I’ve sparred with (6ft 4in ex British champion) Hosea Burton four times for this fight and he’s probably better than Pitters. Shak’s shoulders are big but he’s pretty slight, certainly not as thick as I am. I gain in other areas; strength, movement, timing. Though Shak’s a good bit older, he started far later than me. I’ve been boxing, since I’ve been walking.

‘Obviously, I’ll be trying to close the distance, Shak will be trying to maintain it. He’ll try to capitalise on his height, use the jab a lot, then load up with the back hand and those big right uppercuts. If I have to be clever, I can. He’ll get a shock when I land my jab on him. He’ll be hard to hit to the head early on so we’ll attack the body.

‘Now I just want to get in there. I’ll give it all I’ve got, push the pace all the way through. I’m coming to win every round.

‘I win because my ability is better and my boxing IQ is higher. Shak’s a tough lad but I will break him mentally, then physically. I expect to stop him.’

One of Britain’s greatest ever fighters John Conteh MBE has given Shakan Pitters a massive boost hours before his showdown with Chad Sugden for the British Light-Heavyweight Title, exclusively LIVE on Channel 5 from 10pm tonight.

The fight legend, who memorably won the WBC World Light-Heavyweight title against Jorge Victor Ahumada in 1974 at the Empire Pool, Wembley, transcended the sport in the 70s and become a household name through appearing on the iconic TV show Superstars.

Conteh held the prestigious Lonsdale belt – that Pitters challenges for tonight – over 47 years ago when he defeated rival Chris Finnegan with a hard fought points decision and believes Pitters could become a great champion in his own right.

“I think he has the potential to be not only a champion but a great fighter and his record proves that at the moment with thirteen fights and thirteen wins and four inside the distance. He has some punching power there to win the British title,” Said Conteh.

“He’s certainly got the ability to do it, he’s got the desire. I’m sure he’s won those fights because of his dedication, you have to be fully committed to fulfil your potential,”

“Give everything you’ve got, know what you’re going into. My trainer George Francis said ‘It’s won or lost on the training ground’ so you’ve got to give it 100 percent, always. That’s what Shakan’s doing at the moment, he’s unbeaten in thirteen, so there’s no slacking,”

“The domestic light-heavyweight division looks great at the moment with plenty of talents coming through so it’s good to see it in such fantastic shape. Forty-six years after I won the British title against Chris Finnegan, it would be great to see Shakan holding it,”

With boxing’s big return to free-to-air TV tonight on Channel 5, Pitters is looking to put on a big show with a potentially massive viewing audience that will further raise his profile and Conteh well knows the importance of a free TV platform as his fights were broadcast on the BBC.

He added, “For a boxer to build his profile it’s essential to get in front of the public and with free TV on Channel 5 he’ll get through to millions of people like I did on BBC. You have to leave it in the hands of the promoter who is guiding you to get the best exposure, which they’re doing. But Shakan has to focus on his job and he needs to concentrate on winning the British title tonight.”