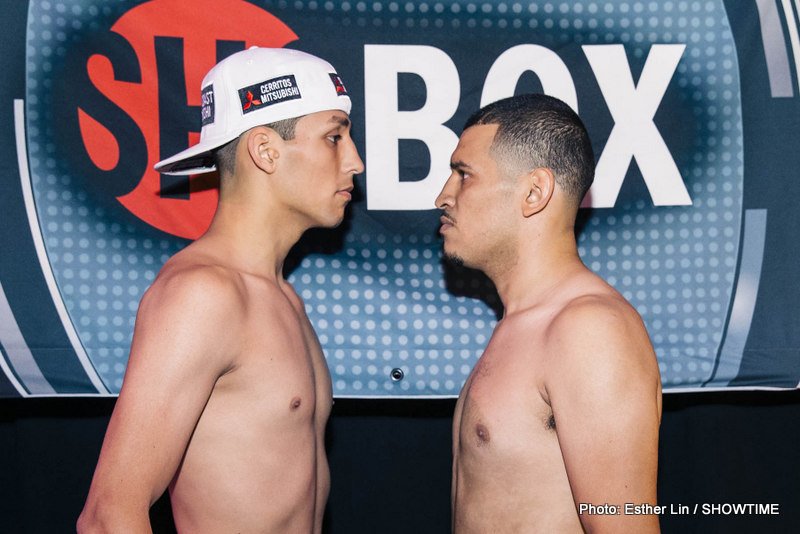 The 23-year-old Centeno Jr. (20-0, 11 KOs), of Oxnard, Calif., is returning to ShoBox for the first time since a dominating 10-round unanimous decision victory over KeAndre Leatherwood in March of 2013. Now under the tutelage of Eric Brown, trainer of WBO Middleweight World Champion Peter Quillin and former world champion and SHOWTIME analyst Paulie Malignaggi, Centeno Jr. is aiming to take the leap from prospect to contender.

Ibarra (14-0, 8 KOs), of Houston, was announced last Friday as a late replacement for the injured Domonique Dolton. The undefeated yet untested 23-year-old was a solid amateur – he won the 2005 National Junior Olympic tournament and owns an amateur victory over undefeated pro Gary Russell Jr.

At just 21 years old, Gomez (16-0, 10 KOs), of the Bronx, N.Y., is taking a step-up in opposition against veteran prospect Santana (19-3-1, 7 KOs), of Santa Barbara, Calif., who has won seven in a row since his last loss to undefeated contender Jermell Charlo.

Here’s what the fighters had to say prior to Thursday’s weigh-in at Fantasy Springs:

“This guy is definitely dangerous — late replacements always are. I’ve underestimated guys before because you might think they haven’t had enough time to get ready for the fight, or you might not be ready for the type of style that they bring.

“But, for this training camp, I feel like we were training for every type of fighter. I had a lot of different sparring partners, such as Ruslan Provodnikov, Sergio Mora, Frankie Gomez and Glen Tapia. They are all different types of fighters and great caliber fighters. It was just great work.

“I know he’s an aggressive boxer. He tries to be a little slick; he tries to bring the action and press forward. I feel like I’m prepared for what he has to bring to the table.

“It’s been a year since I had a chance to fight on ShoBox and the last time the guy was talking a big game. I was hoping for a war to give the fans what they wanted, but, unfortunately, he wanted to turn it into a hug-fest. But I think it should be different this time. I think it should be a good fight and I’m looking to make a statement.

“I’m not calling a knockout because I don’t go in there looking for it, but I’m not sure it will go the distance.

“Everything has been going great with Eric (Brown). The type of style that he brings to the table is awesome. The chemistry is there and everything came together perfectly.

“Working with world-class fighters like Peter (Quillin) and Paulie (Malignaggi) just ups your level and shows you where you’re at. Being able to hang in there with guys like that is an amazing feeling because you know you’re at that world-class level.

“Training with Ruslan (Provodnikov) has been great. The type of pressure that he brings is like no other. He’s just straight forward – he’ll take all your shots and he’s relentless. After becoming accustomed to that type of pressure, I feel like anything this guy brings I’ll be ready for.

“My dad had three heart surgeries and I told him it’s just time to hang it up. Training me was really tough on his body and extremely stressful. We both chose Eric Brown together because we both thought he would go well with my style. He knows how to teach his fighter that killer instinct and he knows how to teach fighters to think for themselves. That’s what we really liked about him and it’s working really well.”

“I was ready and training when we got the call for this fight. We moved from Houston to Los Angeles almost two months ago to get ready for an opportunity like this. I’ve been steadily training waiting for this chance.

“I came over to Los Angeles for an opportunity like this. I’m just ready to get in there and show what I can do.

“I wouldn’t say he’s my toughest test, but this is definitely my biggest opportunity. We’ll find out in the ring if he’s the biggest test yet.

“I’m here to surprise people. I’m here to dethrone him. From whatever cloud they have him on, I’m here to bring him down from that.

“I’ve been in the ring with a lot of different guys. I was in the ring with the Charlo (Jermell and Jermall) brothers and Brian Vera to help him get ready for the Julio Cesar Chavez, Jr. fight. I feel ready; there is nothing I can’t handle.”

“I haven’t seen anyone that he’s faced that has impressed me or has the potential to actually be in the ring with me.

“When I saw his record and the guys that he faced, I only saw two fighters that are like me, that are hungry and looking to be world champs: Jermell Charlo and Karim Mayfield. And those are two young guys that he lost to. It just shows you that the guy is used to losing. Off the two losses to Karim and one to Charlo, it shows you that when he had to face a guy who was undefeated and young and hungry, he didn’t know what to do.

“His seven-fight win streak doesn’t impress me at all. He fought two guys, Freddy Hernandez, who is on his way out, he’s done, and Joachim Alcine, who also is done. They’re not in their prime anymore and they aren’t hungry for the sport the way that I am. He beat them, yes, but they aren’t impressive fighters to me.

“I have a lot of fans back in New York that will be able to watch me on SHOWTIME. My hard work is paying off little by little because now I’m climbing the ladder; now I’m on SHOWTIME.

“If it goes 10 rounds we’ll be more than ready. We’re here, we came to do our job and get our 17th victory and go back home happy.”

“I’ve been in there with the tougher guys. My three losses were against some of the top guys in their division. Karim Mayfield wasn’t undefeated, but he was one of the top contenders. Jermell Charlo, I don’t take anything away from him, he’s right there close to winning a world title. I can say that I’ve been matched tough, I’ve been tested and I know what to expect and how to overcome that.

“He doesn’t have anything I haven’t seen before. We’re both two fighters with two hands and all it takes is one punch to win the fight.

“I’m just excited to do what I’ve been put here to do, and that’s to win a world title. This is my journey, it hasn’t always been easy, but a win on Friday will put me one step closer.

“Whether he is tested or untested, right now my will and my determination to keep climbing to the top is above and beyond. I think I’m in a good spot. Obviously he’s a pretty young kid and I’m sure he’s thinking he’s just going to out-power me, but I’m going to prove him wrong tomorrow night.

“On paper I don’t have more power, but I know I can pack a punch. I’ve faced the bigger guys, junior middleweights and middleweights, so I know that I can end the fight with one punch.”