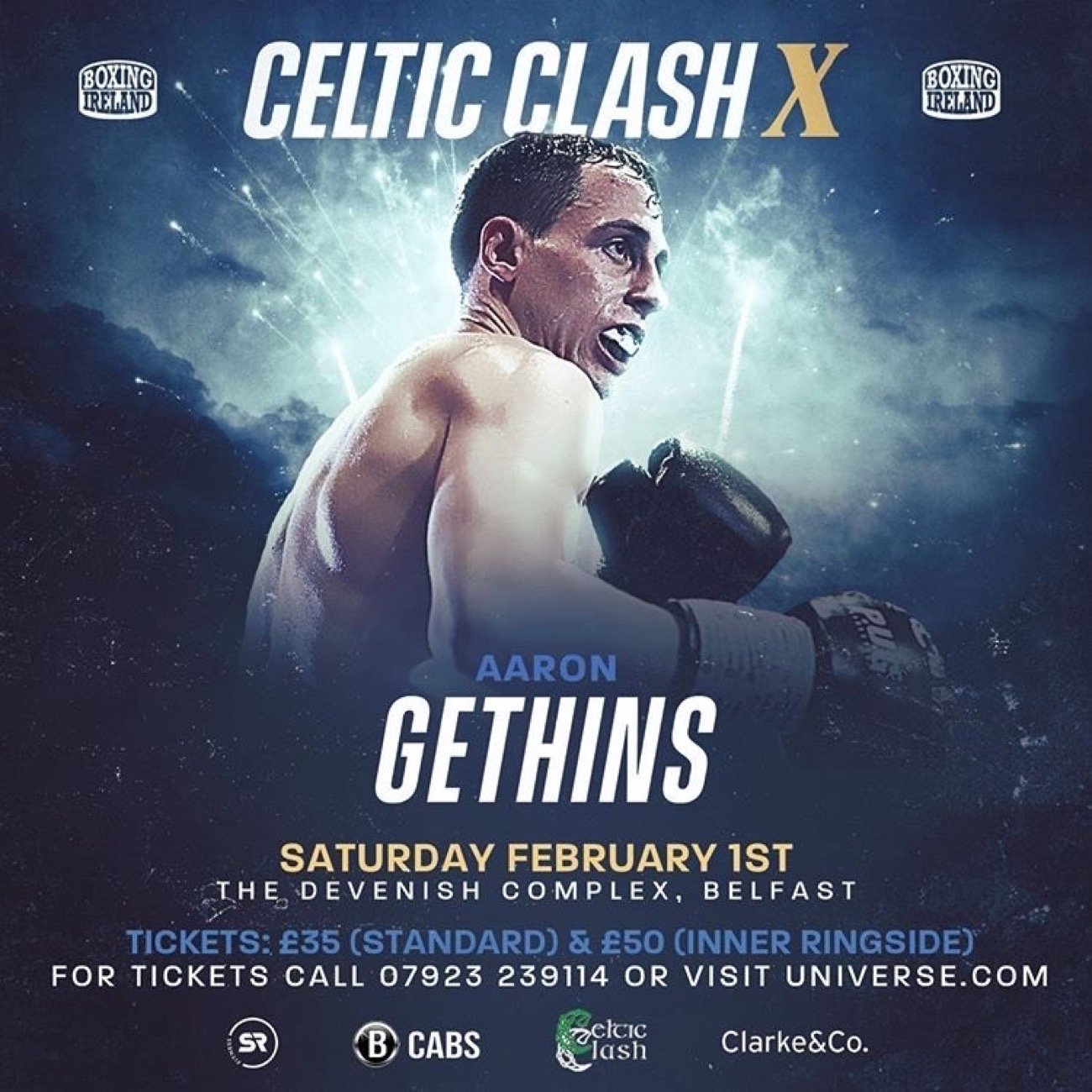 Sligo starlet Aaron Gethins will return to the ring next month and it could set up a big homecoming.

The Sligo Town welterweight will feature on the big ‘Celtic Clash 10’ bill at the Devenish Complex in Belfast on Saturday February 1st and, with a bit of luck, the ‘Celtic Clash’ series could take place a lot closer to home if he keeps winning.

Plans are afoot to bring pro boxing to Yeats County and Gethins knows he has to keep up his streak of victories to ensure he is centre stage for the first fight card in Sligo for over a century.

The Ballinacarrow BC graduate, who is still trained by Sligo boxing legend Stephen Reynolds, is promoted by another Sligo man in Leonard Gunning. Add to this that his training partner, James Lynch, is also now a pro boxer, means the county is enjoying its best period in the ring in some time.

Gethins outlines how ”we want to stay local. Coming in to 2020, me and Leonard have been talking, we’ll hopefully get a show in Sligo. I believe James fighting does make it more likely we can fight in Sligo, as well as having a Sligo born promoter. There’s plenty of reason now to bring the show back home for the three of us – and I know it will sell out. If I can get up to eight rounders then hopefully it will be a title fight for myself.”

The talented 20-year-old splits his time between home, training with Lynch, and Dublin City where he gets sparring with all manner of other prospects at the Celtic Warriors gym. Describing his schedule, Gethins details how “not all the training me and James do is together but that little bits we do together I do enjoy and it’s also great to have another sparring partner to help prepare during the week here at home rather than constantly travelling. I travel up to Dublin two or three times a week to train.”

Single-minded, Gethins is hungry to quickly move up the ranks to ensure a title fight for his eventual homecoming later this year. The young rangy welterweight notes how “I don’t really even watch any boxing – I prefer to get in there and just do it! – hopefully I keep winning, winning, winning and build my career. I’m looking to improve the quality of my punches and the impact they make rather than throwing punches for the sake of it. Throw them to hurt and to land. I just need to pick up the training now and keep going with it, try to get more fights under my guard.”

Promoter Leonard Gunning is enthused be Gethins rapid progress, “Aaron is really lucky to have Stephen (Reynolds) and his Dad, Glen, pushing and supporting him and also to have James Lynch, who has now turned pro, there available for sparring. It’s pretty rare to have all of this at your disposal when you are west of the Shannon.

“He has faced good international opponents so far with a mix of style and that is very important at this stage of his career. He’s going in the right direction and all he need to do is keep building the experience and racking up those wins and titles are sure to come,” added Gunning.

The well-supported fighter is hoping to bring another big crowd to Belfast on February 1st and notes how “I highly appreciate the support they give me. The last show was fantastic and the place was buzzing and this one is even better and has Eric Donovan headlining with some cracking fights on the undercard so its definitely going to be the best show yet!”

Tickets cost €40 (unreserved) or €55 (ringside) and can be bought from all the boxers on the bill. To buy from Aaron Gethins, contact him through his social media or ring Glen at 0862134987 or on Universe.com.