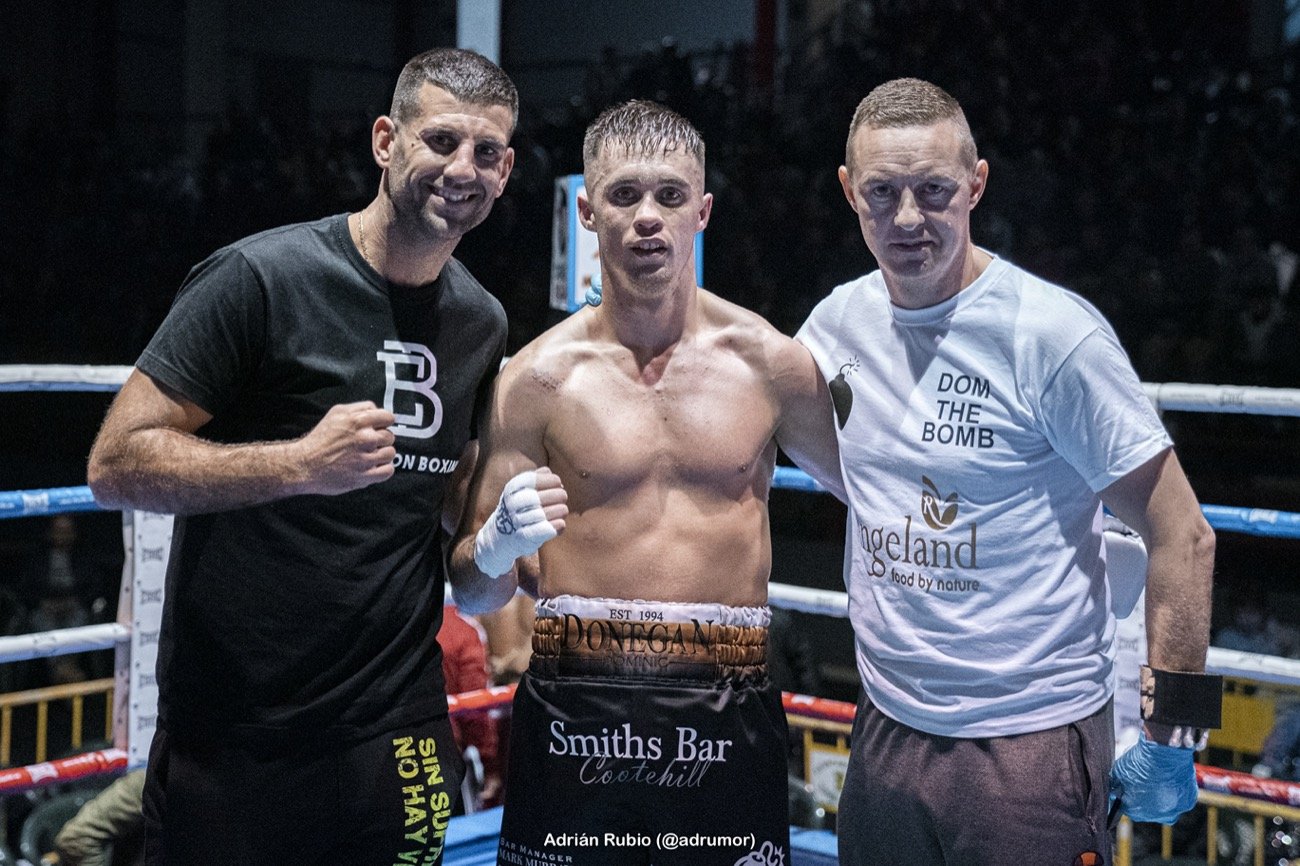 The Drumgoon puncher fights for the fifth time on February 1st, featuring on the Celtic Clash 10 bill at the Devenish Venue in Belfast. Donegan is enjoying a high level of activity having fought just last month – where he caught the eye of a certain Sergio Martinez.

The Spain-based Argentine was both a light middleweight and middleweight world champion and, since retirement, has moved into promoting boxing. ‘Maravilla’ had Donegan on his show in Torrelavega, Northern Spain, last month, and was suitably impressed with ‘The Bomb’.

Donegan describes how “he came up to me after my fight and said he was very impressed with my fight and that I was going places. To hear that from someone like that means so much and makes all the training you do worthwhile. It was so good to get talking to Sergio Martinez. I got nice snaps for my scrap book and great memories. Fighting on that card in Spain was something else. It was a boxer’s dream to fight in front of that many people. To get a nice warm welcome the way I did was just amazing. It makes you want more of them fights makes me more hungry.”

With a vote of confidence coming in from a soon-to-be Hall of Famer, Donegan is adamant that he is Ireland’s best light middleweight and he is hopeful that victory on February 1st will lead to a title shot. The Army man outlined how going in 2020 I want that BUI Celtic title shot after this fight Feb 1st. Then and the end of 2020 I want to hopefully have another five fights to take my up to 10 fights in total and then challenge for that Irish belt.”

The light middleweight scene is packed with fighters on the brink of domestic honours. The likes of Limerick’s Graham McCormack, Dubliner Cillian Reardon, Bray’s Eddie Treacy, and local rival Owen Duffy from Shercock are all closing in on a Celtic title tilt. Donegan is open to fighting any of his fellow Irish 154lbs fighters. The Boxing Ireland Promotions prospect is even grateful for their presence on the circuit, not just because it could lead to some classic encounters, but because they prove massive motivation for him.”

Explaining his ‘all comers’ attitude, Donegan describes how “as I said at the start of my career, I am open to any fights if they make sense and my coach and my manager is happy. I will fight anyone who is put in front of me. There all loads of light middleweights at the minute and it’s so good to see. It makes for plenty of good fights and makes you push harder. I am looking forward to my fight on the 1st of February. The following keeps growing. I am actually selling more tickets that my first fight which I can’t believe, but I am getting very good support and I can’t wait to put a show on for all my fans.”

Almost a year on from his controversial last fight, Francy Luzoho will return to the ring with a new team and a new mindset.

Last March the Blanchardstown light welter lost on points to Crumlin’s Martin Quinn at the National Stadium on a big TG4 show – a result which split opinion and is still debated today. A verdict which hurt Luzoho, the 24-year-old made big changes in the aftermath, relocating his training from Inchicore to Lanzarote, and he returns with a vengeance next month.

Luzoho will next fight on Saturday February 1st at the Devenish Venue in Belfast on the big ‘Celtic Clash 10’ bill where he will jump straight back into the deep end and take on local favourite Stephen Webb in the card’s co-headline bout. It was never going to be any other way for Luzoho, who saw a similarly tough comeback fight last month fall through at the last minute.

‘The Butcher Boy’ hit the headlines in 2018 following a debut knockout win over tough Englishman Sam Jones and he explains how “there’s no such thing as a routine for me. When I was meant to fight in Lanzarote my opponent was an unbeaten fighter with three wins. He pulled out after seeing my record and the people I faced. One thing I’ve learned after my last fight is there no such thing as pressure. All you can do is prepare like never before and go out and have fun.”

“I’d been feeling like I needed a move for a long time but, after my last fight, I came to terms that I need a change. I needed a new team which resulted in me changing trainers. It’s a new chapter. Let’s call it Chapter 2. I call it a fresh start, but while it’s a new life, new trainer, and new team – it’s the same dream.”
–
Now training with Dublin former pro Jonathan ‘Thunderbolt’ O’Brien in the Canaries, Luzoho notes how “the relationship between me and Jon has been extremely positive. I have a strong feeling that me and him are going a lot further in this game. I just feel like he’s going to bring a lot more out of me, motivate me a lot more and, for the short period we have been together, he’s gone out above and beyond for me. That means a lot to me.”

Having spent time training in Tenerife previously, a move back to sunnier climes appealed to Luzoho who describes how “the move is going to do wonders for me. After living and Tenerife for over a year I felt it did wonders for me. Just look at my debut it speaks volumes. Then leading to my second camp in Ireland for my second fight I didn’t have my greatest camp or performance. I still felt I won but I should have been in better form. Look, that’s boxing, it just showed me training in Ireland hasn’t really benefited me much. Living here [Ireland] my whole life, I needed the change and, sure look, at least that way I can get the weight off me faster!”

Always positive, Luzoho is adamant he will achieve his goals. The fighter of Congolese stock outlines how “the sky’s the limit. All I can say keep doubting me. Even if I have to go to hell and back I will achieve my dreams. All the greats in boxing have lost and have come back even stronger, they came back and took over the sport of boxing. I have to, I have no other choice but to make it for my mum, my sisters and brothers, my fiancée, my close friends and for everyone that wants to see me succeed.”

Tickets cost €40 (unreserved) or €55 (ringside) and can be bought from all the boxers on the bill or by ringing 07923 239114 or on Universe.com. Contact Francy Luzoho via his social media channels.