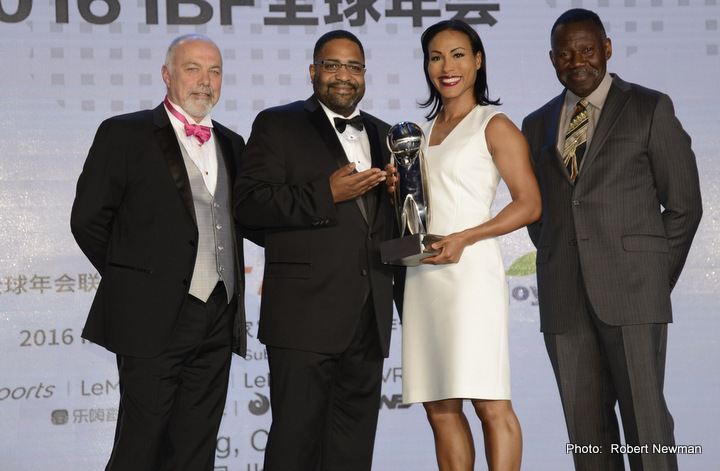 Five times World Champion and female superstar Cecilia Braekhus was thrilled after participating at the 33rd IBF convention in Beijing, China this week.

The colombian-born Norwegian holds all five titles (WBA, WBC, WBO, IBF and IBO) in the welterweight division, and is reckon as pound-for-pound the best female fighter in the world.

For her outstanding performances over eight years on the professional scene, where she as now stands with the perfect record of 28-0, she was named as IBFs «Female fighter of the Year», and received her award at
the last day of the IBF convention this week.

Braekhus is the first female fighter who becomes undisputed champion of the World.

Said Braekhus after receiving the award:

– I am very proud and honoured. I am also thankful after a fantastic week in Beijing and at the different events arranged by the IBF. It has been great fun to meet some of the legends that has been here, as well as thousands of fantastic chinese boxingfans. But it has also been important to expose female boxing and female fighters. I feel that the IBF gives us the recognition we deserve.

After eight years with Sauerland Promotion Braekhus chose not to renew her contract as it expired in 2014, and has instead build up her own First Lady Promotion. Her promotion company has later teamed up with the Klitschko-brothers and their «K2», as well as IMG, the company that represents and manages some of the world’s greatest sports figures and fashion icons.

Norway lifted the ban against professional boxing in December 2014, and Braekhus, who has been forced to box out of Germany as a result of the ban, aims to be the first Norwegian to fight in Norway since the ban was determined in 1981.

– It’s been very sad for me not to be able to box in Norway. I have a lot of fans there and defending my titles in front of a home crowd would be a dream come true. Now that the ban has been lifted we just have to finalize some last details before we can bring boxing back home to Norway again, says Braekhus.