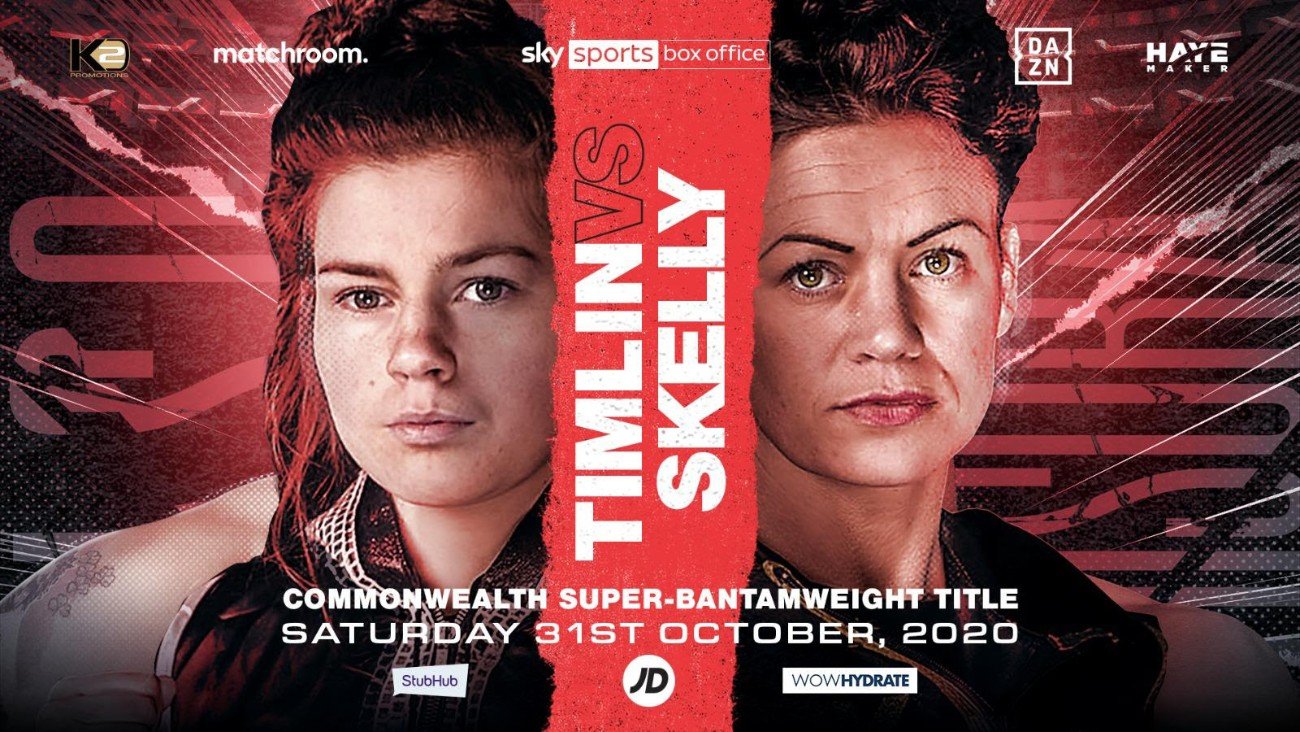 The undefeated super-bantamweights were originally set to lock horns on October 2 at Bowler’s Exhibition Centre in Manchester on a Kieran Farrell Promotions show, which was due to be broadcast live on FITE.TV, but now the fledgling pair find themselves with a chance to perform on the biggest platform in the UK.

Trained by Kieran Farrell and managed by Dave Coldwell, Amy Timlin is just 20-years-old, but despite her young age, the ‘Lion Heart’ has won British, European and World titles in kickboxing when training out of Wayne Elcock’s Boxing Academy.

She also went on to achieve many other accolades in the amateur boxing ranks, joining in 2017 under the guidance of world amateur champion Frankie Gavin.

During the official press conference for this Saturday night’s fight at The SSE Arena in Wembley, she spoke of the delays experienced for the forthcoming fight, “I’ve been waiting a long time for this fight. I’ve been in a training camp for about five months now. To get this opportunity is amazing and I couldn’t have asked to be on a better platform. I know it’s going to be a cracking fight to watch on Saturday night.”

She then moved on to talk about how she believes the bout with Skelly would unfold, “I like to think my style is exciting, I love a good tear-up. It’s going to be exciting. I know that Carly is also an aggressive fighter so fans can expect a toe-to-toe war!”

In response to Timlin’s comments, Skelly agreed, “I’m the same, come forward, and I love to fight! It’s going to be a good fight on Saturday. It’s a great opportunity, like Amy said, we’ve both been waiting for this fight for a long time. It has been on the card for a few months now. Because the fight date has been changed a few times, I’ve had a lot of time to work on other stuff in the gym.”

Managed by Paul Stevenson and trained by Sid Saidankey at North Mersey ABC, 33-year-old Skelly, who only started boxing four years ago, described the problematic developments leading up to her maiden title tilt, “Originally it was meant to be in August but it wasn’t ever announced, then it was pushed back to September, then it was officially announced for October 2nd, so I thought that one would go ahead, but then with everything going on and all the restrictions it fell through again.

“But it’s all worked out well now that it’s on the big stage, which it deserves to be on. All the slip ups I’ve had, with all the cancelled dates, I now believe it all happened for a reason.”

The full-time pediatric nurse at Alder Hey Children’s Hospital in Liverpool and mother of two boys plans to take this unique opportunity with both hands to make a name for herself, “Nobody really knows me, but after Saturday that will change. I’ve had a lot of support from the likes of Derry Matthews and Darren Till.”

On the same Matchroom Boxing card, Savannah Marshall and Hannah Rankin clash for the WBO World Female middleweight title, with the women’s fights making up almost half of the card, as debutant Ramla Ali also appears.

The unbeaten pair were scheduled to fight earlier this month but now find themselves on the undercard to Oleksandr Usyk’s monster fight against Derek Chisora.

Rising star Timlin (4-0) is tipped for a bright future, training under the tutelage of Kieran Farrell and managed by Dave Coldwell.

“I’m buzzing for this. I’ve been training throughout lockdown, and I’m ready to go. This fight will push me on; it’s all about learning. The pressure is on her, Carly will come out all guns blazing, but we’ve got a steady game plan. I can’t wait for the first bell; this platform is huge,” revealed Timlin.

“I’m really excited to have Amy on such a massive show like this. Thanks to Eddie for giving us a slot in these testing times. Amy is a fantastic fighter, at 20 years old, I think she’ll show people in the next year or two she is the next generation of flag bearers coming through in Women’s boxing,” said Coldwell.

“It’s been a long camp having to juggle things about, but I’ve had some time off recently to concentrate on the fight,” said Skelly. “It’s a massive risk for Amy to take at her age; she won’t have felt power like this from a more mature fighter. This fight opens doors; I believe in myself and want to reach the World level.”

Promoter Eddie Hearn added: “We’ve seen some amazing domestic fights recently in women’s boxing, and this is another cracker. Two unbeaten fighters gunning for a World Title, the winner here will put themselves into contention for just that in 2021.”

Timlin vs. Skelly joins McCarthy vs. Laggoune and Selby vs. Kambosos Jr on the Usyk-Chisora undercard with more additions to be confirmed shortly.

Canelo tells Andre Ward: ‘You can get it in the ring too’ after Caleb Plant427 Total Shares
Ten Years Ago: Floyd Mayweather KO’s Victor Ortiz With The Ultimate Sucker-Punch, But Larry Merchant Steals The Show339 Total Shares
Exclusive Interview: Thomas Hearns Speaks On The Sugar Ray Leonard Classic338 Total Shares