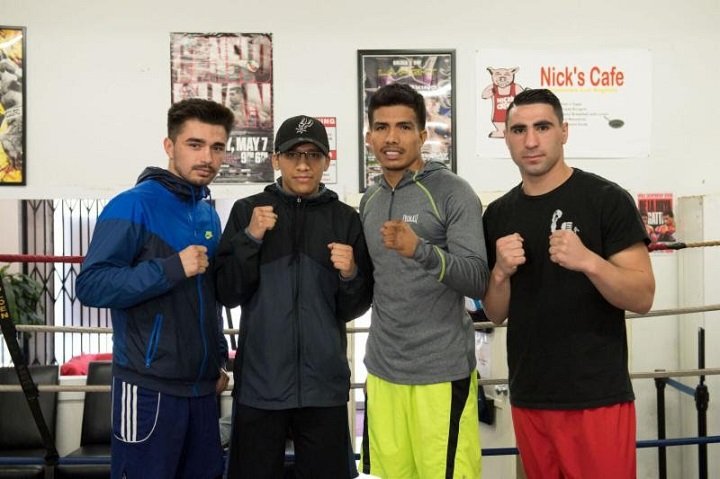 Carlos “The Solution” Morales (16-2-3, 6 KOs) hosted a media workout today ahead of his co-main event feature on the Dec. 14 edition of Golden Boy Boxing on ESPN at Fantasy Springs Resort Casino in Indio, California. The event will be headlined by the 10-round super bantamweight clash between current NABF and NABO Super Bantamweight Champion Diego De La Hoya (20-0, 9 KOs) and tough challenger Jose “Sugar” Salgado (35-4-2, 28 KOs).

Here’s what today’s fighters had to say at the workout:

CARLOS “THE SOLUTION” MORALES, Super Featherweight Contender:
“The fight against Alberto Machado was a great experience for my career. It did not go the way I wanted, but I learned from it. We learned to start strong from the beginning, especially in foreign territory.

“I’m going to give a great show. Fans can expect a spectacular win and an exciting fight. After that, I want a rematch with WBA Super Featherweight World Champion Alberto Machado. But this time, I want it on US territory.”

FERDINAND KEROBYAN, Welterweight Prospect:
“I have a strong amateur background. I earned national titles and was a contender for the Olympics. My amateur background made me the person I am today. This fight will mark one year since I debuted and will be my seventh fight as a professional. I am hoping to come out with a victory and to see that I have made good changes in that year.”

JOSHUA “THE PROFESSOR” FRANCO, Current WBC Youth Silver Super Flyweight Champion:
“Winning my first youth title was an important step for my career. It was even more special because I fought in front of his backyard. I went in confident, and I knew what I wanted. When I spar, I spar with world champions. I’ve gotten to work with Abner Mares and Carlos Cuadras.”

“I just want to look good and show what I’ve been learning in this next fight. I want to use my jab more, but most of all I need more experience. For 2018, I want to fight for more rounds and grab another title.”

JONATHAN “THUNDER” NAVARRO, Super Lightweight Prospect:
“It feels great to know I’ll be able to eat during Christmas, especially since I missed Thanksgiving. For my last performance, I give myself a 7 out of 10 because there is always room for improvement. We’ve been working on our technical skills, so hopefully in this fight we get to work on that. I’m looking to get more experience, but if the knockout presents itself, I’ll take it.”

RAUL “EL CUGAR” CURIEL, Welterweight Prospect:
“I always try to do my best and give a great performance. Each boxer wants to write his story, and I want to reach the pinnacle of the sport. I’ll make sure to put on a great show at Fantasy Springs.”

Tickets for the event start at $25 and are now on sale at the Fantasy Springs Resort Casino box office, by calling 1-800-827-2946, or by purchasing online at www.fantasyspringsresort.com.