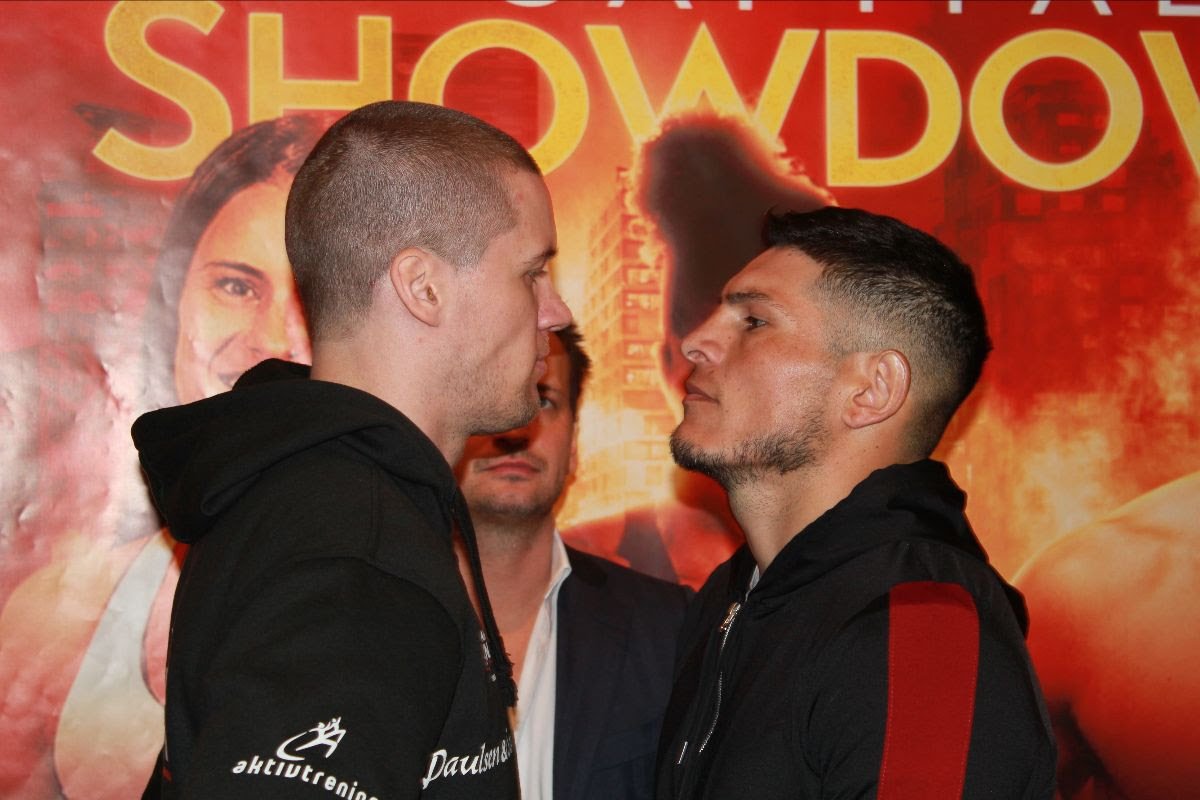 Katharina Thanderz (12-0, 2 KOs) and Danila Ramos (8-1, 1 KO) both made weight today ahead of their interim WBC Female World Super Featherweight title fight tomorrow night at the Ekeberghallen in Oslo, Norway.

Thanderz gets her first taste of World title action as she tops an action-packed card at the historic Oslo venue that also features Norway’s number one male boxer Kai Robin Havnaa (15-0, 13 KOs) in a crunch cruiserweight clash against Argentina’s Mariano Angel Gudino (13-3, 8 KOs).

Katharina Thanderz (12-0, 2 KOs) came face-to-face with her opponent Danila Ramos (8-1, 1 KO) for the first time at a press conference today in Oslo ahead of their interim WBC World Super Featherweight title fight on Saturday night.

Thanderz, a former European and WBC International Champion, headlines a stacked card at the Ekeberghallen as she challenges for her first World title, while Norway’s number one male boxer Kai Robin Havnaa (15-0, 3 KOs) takes on Mariano Angel Gudino (13-3, 8 KOs) in a crunch cruiserweight clash.

“I feel great. I can’t wait until Saturday,” said Thanderz. “I’ve had a great camp with really hard training. Some days I was completely exhausted but that’s what you have to do to win a fight like this. I have lots of friends and family coming on Saturday so I’m really happy about that. I’m not sure what’s going to happen but I know that I’m going to give it all. This is a big chance for me to realize my dream and win my first World title.”

“I’m very happy to be here,” said Ramos. “Norway is beautiful and it’s the first time I’ve ever seen snow. I feel like I’m already the champ. I didn’t take my belt home to Brazil last time, but there is no way that’s happening again. I’m certain I will win. Come to the fight or watch on TV, I will put in a sensational performance and you will see a new champion on Saturday!”

“It’s a tough fight for both girls and both fighters are here to win,” said promoter Nisse Sauerland. “It’s a massive night for Norway. Boxing is growing sport over here. It’s been illegal for many years and there have been lots of restrictions, so I’m just happy to put on this great fight night. If Katharina wins then I think there will be a new Norwegian national hero and there will be some very big fights to be made, people like: Terri Harper, Eva Wahlstrom and other big names.”

“I’m happy to be here in Norway,” said Gudino, who comes in as a late replacement for Al Sands. “Havnaa is in trouble. He will see what it is like to fight a real warrior. I’ve come here to fight and I’ve come here to win. I’ve not come here for a holiday. I give the same importance to every fight I have. It doesn’t matter where it is or who it is against. I know Havnaa is a good fighter. He is a big opponent for me, but I’m ready for a war!”

“I can’t wait to get into the ring on Saturday night,” said Havnaa. “I’ve had a late change of opponent before so I’m used to this and I’m not going to let it affect me. My opponent looks fit and strong. I know he is coming here to fight and I will be prepared to face my best opponent yet. He’s says that he’s going to make it war so I’m expecting a war. Let’s go to war!”

“Kai’s had a late replacement. I gave him a list of three fighters and he’s picked the hardest one,” says Sauerland. “I really like his attitude and fingers crossed it doesn’t backfire. I expect a very good, tough fight. It’s going to be a great crowd and we are building something special here in Norway.

“The name Havnaa is synonymous with boxing in Norway. It’s a huge name here. His dad was a World Champion and now Kai is following in his footsteps and emulating his success. He’s the biggest star in boxing in Norway at the moment. He’s taking over and now he needs to produce the goods in the ring.”

The former two-weight World Champion will be ringside as Thanderz looks to capture her first World title in front of her home fans at the Ekeberghallen.

“It means a lot to me that Sergio will be there,” says Thanderz. “He always promised that he would be there when I fought for my first World title and he hasn’t forgotten. I couldn’t believe it when he texted me a picture of his flights to show he was coming. I was very happy and got very emotional.”

Before signing for Team Sauerland, Thanderz fought under Martinez’s Maravillabox promotional banner, and the 31 year-old admits the former WBC and WBO champion has been a influential figure in her boxing career.

“He is a big inspiration for me. Not only because of his success as a boxer but also because of his whole life story, which is really special and unique,” she says. “He is the perfect example of the fact that you can achieve whatever you want in life with hard work and self-belief, even when starting from the very bottom.

“He started boxing when he was 20 years old and went all the way to the top winning World title fights more than 10 times. He grew up in a very poor family, and overcame a lot of adversity in life. It’s impossible not to get inspired with his story. He’s also an excellent human being, and so humble. I really appreciate and value his friendship.

“He always gives me a lot of advice, and takes an interest in watching my sparring videos to tell me his point of view. He never talks about specific techniques, but helps me a lot with the mental part of boxing, mental strategies, and the tactical part, which he thinks is the most important part of the game. He’s extremely intelligent, and understanding his philosophy helps me a lot.”

“In her most important fight, it’s a pleasure for me to be able to be there with Katharina to witness her World coronation,” says Martinez. “For me it is a tremendous honour to know her and to have been able to work with her. The most beautiful thing about Katharina, apart from being an excellent athlete, is her quality as a person. She’s a fantastic woman. I love and respect her a lot. I will be there supporting her. She really deserves that.”