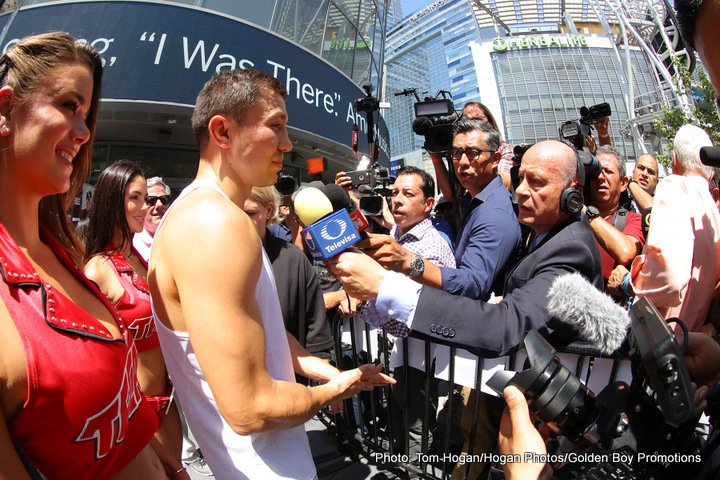 Tickets for “Canelo vs. Golovkin: Supremacy” can be purchased online by visiting www.FathomEvents.com or at participating theater box offices. A complete list of theater locations is available here (theaters and participants are subject to change).

On Saturday, September 16, Mexican Independence Day weekend, lineal and Ring magazine middleweight champion Canelo Alvarez (49-1-1, 34 KOs) goes toe-to-toe with WBC/WBA/IBF/IBO Middleweight World Champion Gennady “GGG” Golovkin (37-0,33 KOs) in the 12-round main event. “Canelo vs. Golovkin: Supremacy” is the event that fight fans have been clamoring for, as Canelo and Golovkin will fight to determine supremacy in the middleweight division. Although T-Mobile Arena in Las Vegas is sold out, fight fans have the opportunity to catch this epic mega-fight live in movie theaters nationwide.

Fighters for the undercard bouts will be announced shortly.

Tickets for “Canelo vs. Golovkin: Supremacy” can be purchased online by visiting www.FathomEvents.com or at participating theater box offices. Fans throughout the U.S. will be able to enjoy the event in nearly 400 select movie theaters through Fathom’s Digital Broadcast Network (DBN). A complete list of theater locations is available on the Fathom Events website (theaters and participants are subject to change).

Canelo was last in action on May 6, 2017, with an unprecedented victory over Julio César Chávez, Jr. in a fight broadcast by Fathom Events from T-Mobile Arena. Golovkin last fought on March 18, 2017, when he beat Daniel Jacobs in a 12-round bout at NYC’s Madison Square Garden. While Golovkin won via a unanimous decision, this was the first time in his professional career that his fight went all 12 rounds.

Canelo said, “The fight against Gennady Golovkin on September 16 is one of the biggest fights of my career, and I am glad that all my loyal fans will have the opportunity to support me not only at T-Mobile Arena in Las Vegas, but also in movie theaters across the country. That makes me even more motivated to offer fans a fight full of high intensity on a very special date for Mexicans on Mexican Independence Day weekend.”

Golovkin said, “I am looking forward to having the fans see the big drama show on the big screen. It’s a great way to see this fight.”

Oscar De La Hoya, Chairman and CEO of Golden Boy Promotions said, “Canelo vs. Golovkin is a sure-fire, action-packed event that will leave fans on the edge of their seats and what better way than to watch this event live on a big movie theater screen. Since the mega event that is Canelo vs. Golovkin is sold out in Las Vegas, I encourage fans to visit their local theaters to enjoy this fight in a fun and entertaining atmosphere with fellow fans.”

“Canelo vs. Golovkin is a blockbuster event worthy of the big screen. These two world champions are going to give fans an epic performance.  It’s a great way to enjoy the best boxing event of our era as well as Gennady’s theatrical debut,” Tom Loeffler, promoter of Gennady Golovkin said.

“We are proud to team up with some of the most elite partners in the boxing business to bring this fight to movie theaters across the country” said Fathom Events VP of Programming Kymberli Frueh. “When this bout between GGG and Canelo was announced in May, the T-Mobile arena was electrified with enthusiasm. The anticipation is building and we are proud to be a part of this historical event.”

Canelo vs. Golovkin is a 12-round fight for the middleweight championship of the world presented by Golden Boy Promotions and GGG Promotions and sponsored by Tecate “BORN BOLD,” Hennessy, Never Stop, Never Settle, O’Reilly Auto Parts, Fred Loya Insurance, Interjet, Fathom Events, Tsesnabank and Capital Holdings. The event will take place Saturday, Sept. 16 at T-Mobile Arena and will be produced and distributed live by HBO Pay-Per-View® beginning at 8:00 p.m. ET/5:00 p.m. PT.