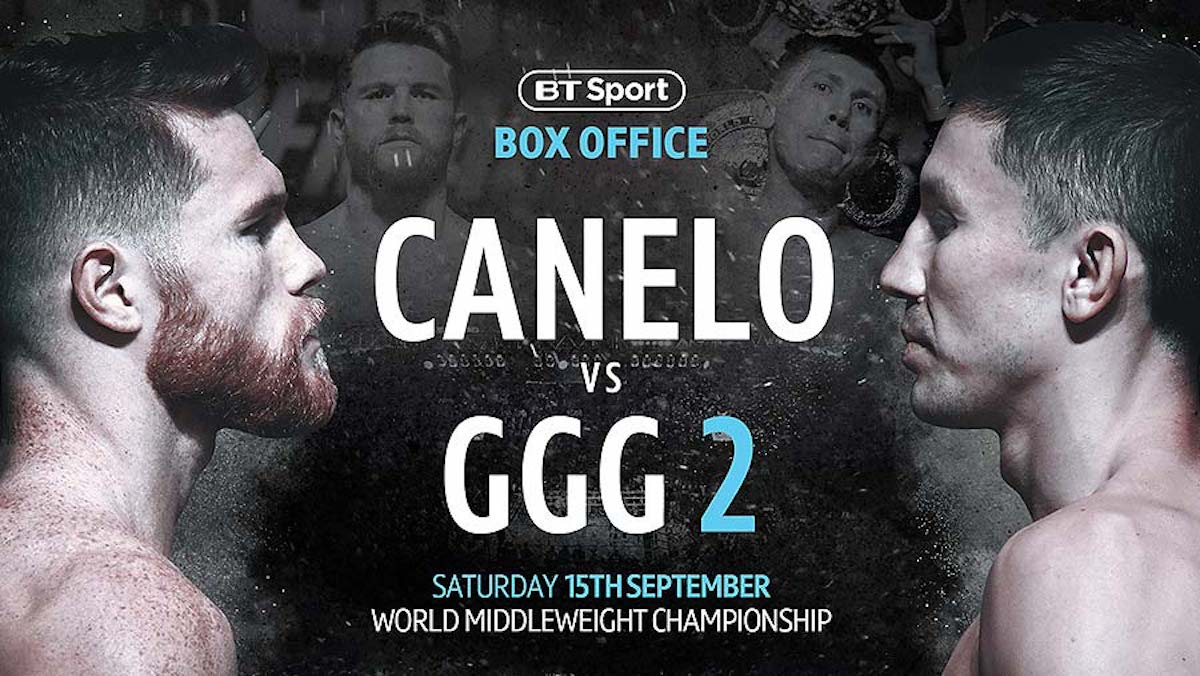 On September 15, Gennady Golovkin and Saul Canelo Alvarez will face each other in the ring for a second time at the T-Mobile Arena in Las Vegas to decide who the true middleweight king of the world is, the first of three momentous clashes which will be broadcast on BT Sport Box Office this autumn.

The BT Sport Box Office event will kick off at 23.30 UK time with an entire re-run of last year’s controversial split draw when Golovkin retained his WBC, WBA and IBF world titles. Live action from the T-Mobile Arena in Las Vegas starts from 01.00 with three bouts before the main event.

Expert analysis on the night will be provided by David Haye, Steve Bunce and Richie Woodhall.

Canelo v GGG 2 will cost just £16.95. Existing BT Sport and BT TV customers can pay using their remote control, Sky customers without a BT Sport subscription can register and pay online at www.bt.com/ sportboxoffice and will then be able to use their remote to subscribe to subsequent events. For more information or to subscribe visit www.bt.com/ sportboxoffice.

All-NEW SPECIAL EDITION OF THE FIGHT GAME EXAMINES THE UPCOMING REMATCH OF THE BIGGEST FIGHT IN THE SPORT WHEN “CANELO/GGG 2: THE FIGHT GAME PREVIEW” PREMIERES SATURDAY, SEPTEMBER 8 ON HBO

A special edition of The Fight Game examining the upcoming heated rematch between Canelo Alvarez and Gennady Golovkin is set when “Canelo/GGG 2: The Fight Game Preview” premieres SATURDAY, SEPTEMBER 8 (12:30 a.m. ET/PT or immediately following the live BOXING AFTER DARK tripleheader from Inglewood, CA), exclusively on HBO. Hosted by the four-time Sports Emmy® winner, Lampley will be joined on the set by former middleweight champion Daniel Jacobs and Hall of Fame trainer Freddie Roach as they drill down and take an in-depth look at the biggest fight of the year in the sport.

The assembled roundtable of commentators will look back at last September, where Canelo and “GGG” competed for 12 action-packed rounds, ending in a controversial draw. As the tension and anticipation for Sept. 15 grows, the experts will zero in on what each fighter needs to do in the rematch and not to leave it in the judges’ hands.