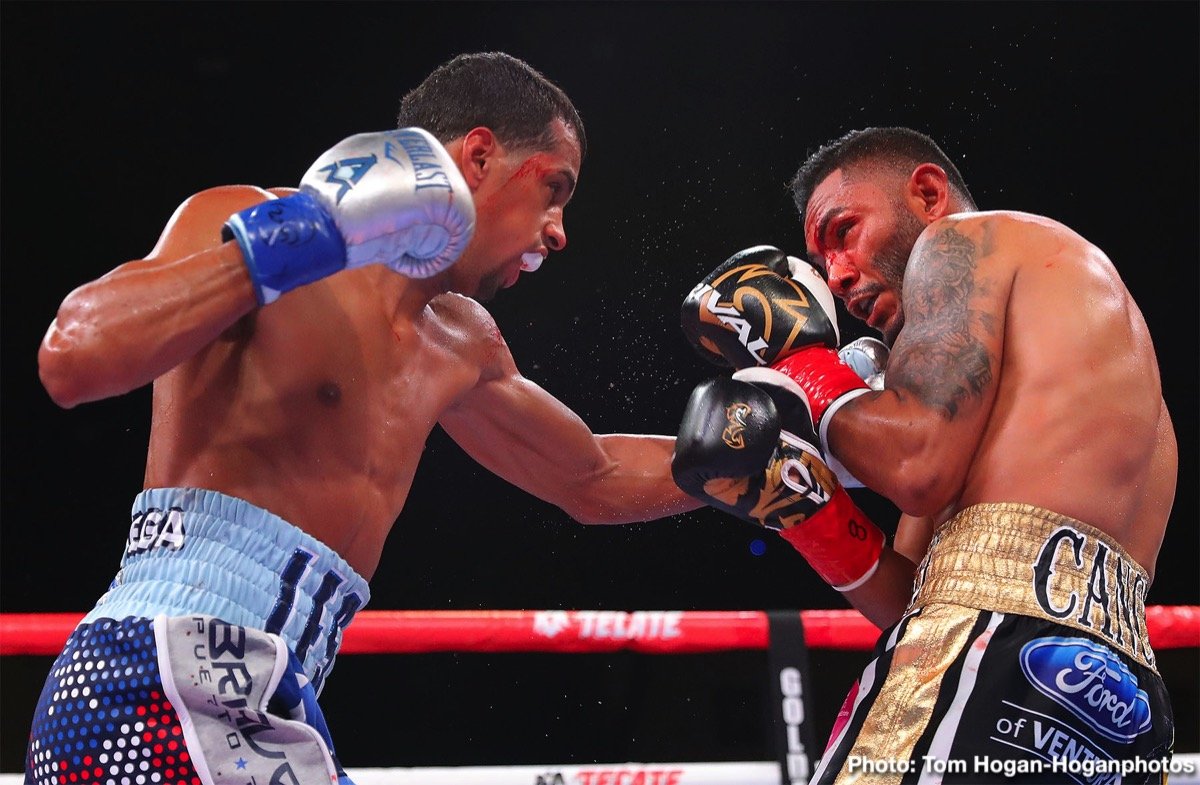 WBA Super Featherweight World Champion Andrew “El Chango” Cancio (21-4-2, 16 KOs) hosted a media workout yesterday at KnuckleHeadz Boxing in Ventura, Calif. ahead of his 12-round title defense against Rene “Gemelo” Alvarado (31-8, 20 KOs). The fight will place Saturday, Nov. 23 at Fantasy Springs Resort Casino in Indio, Calif. and will be streamed live on DAZN.

Below is what the champion had to say at his workout:

On the Changes Cancio Has Made Since His First Encounter with Alvarado:

“There have been changes in my training, my trainers and my confidence. Before I was kind of timid with my head movement and my jab. I feel a lot better throwing combinations now. My sparring partners know that when I’m done throwing a combination, they can expect a few more punches right after. They always say, ‘man I thought you were done with the combination and here I am getting caught again.'”

“Darden [Zenunaj] was the only one I didn’t stop in the past four fights. Darden was game and I threw a lot of punches, a lot of combinations. I feel like it intimidates them, and it throws them off their rhythm. I’ve been learning more and more as each day goes by in the gym. I’m getting more accustomed to my coach’s styles and their philosophies on how to do things, and I think Rene is going to see that difference.”

“I like throwing body shots. My combinations include body shots, and I think that’s going to be the key. It was the key with Alberto Machado, and think it’s going to be the key to beating Rene Alvarado. Rene Alvarado already knows that I hit hard. He felt it our first fight. I think psychologically, he saw how I destroyed Machado. He shouldn’t expect any less from me on fight night.”

“I think it’s a bunch of B.S. I got the short end of the stick once again. I’m not a big name to a lot of people like Leo Santa Cruz is. I feel like that’s why they did it. Machado, his belt got taken away because he was super champion and they gave it to Gervonta “Tank” Davis, so if I come out victorious Nov. 23 and if Leo comes out victorious Nov. 23, that’s a fight I definitely want to make. I feel like I’m the bigger, stronger 130-pound guy. I feel like his style and my style will clash for a good fight, but I think he’s going to realize the difference at 130 pounds.”

On Dealing with His Full Time Job and Working:

They [Southern California Gas Company] are helping me out more now as a champion. I don’t have any more time on my book to take days off, but you can take days off without pay, though It’s up to the supervisor’s discretion. They help me out in that aspect. Like today I have media workout. I was going to go in for four hours, but I knew it was going to be very tiring to go out there and drive and drive back over here. I didn’t want to be late, so they help me out in that aspect, but I still have to work like everyone else.

On Being an Inspiration to Those Who Want to Succeed:

“I’m doing what I’ve always wanted to do, so that’s how I’m able to do all of this. My grandma told me it’s not going to be easy. She would say that it’s not impossible, and it’s true. I’m still doing it till this day. I’m doing this because I love this. I want people to know that if you put your mind to it, you can do anything.”

Cancio vs. Alvarado II is a 12-round fight for the WBA Super Featherweight World Title presented by Golden Boy. The event is sponsored by Tecate, “THE OFFICIAL BEER OF BOXING,” and Hennessy “Never Stop. Never Settle.” The event will take place Saturday, Nov. 23 at Fantasy Springs Resort Casino in Indio, Calif. and will be streamed live on DAZN. The title defense is one of several highlights this fight season on DAZN – an entire fall featuring boxing’s biggest matchups in one of the best schedules in boxing history.

Tickets for the event are on sale and are priced at $35, $45 and $55. Tickets
will be available at the Fantasy Springs Resort Casino box office, by calling 1-800-827-2946, or by purchasing online at www.fantasyspringsresort.com.