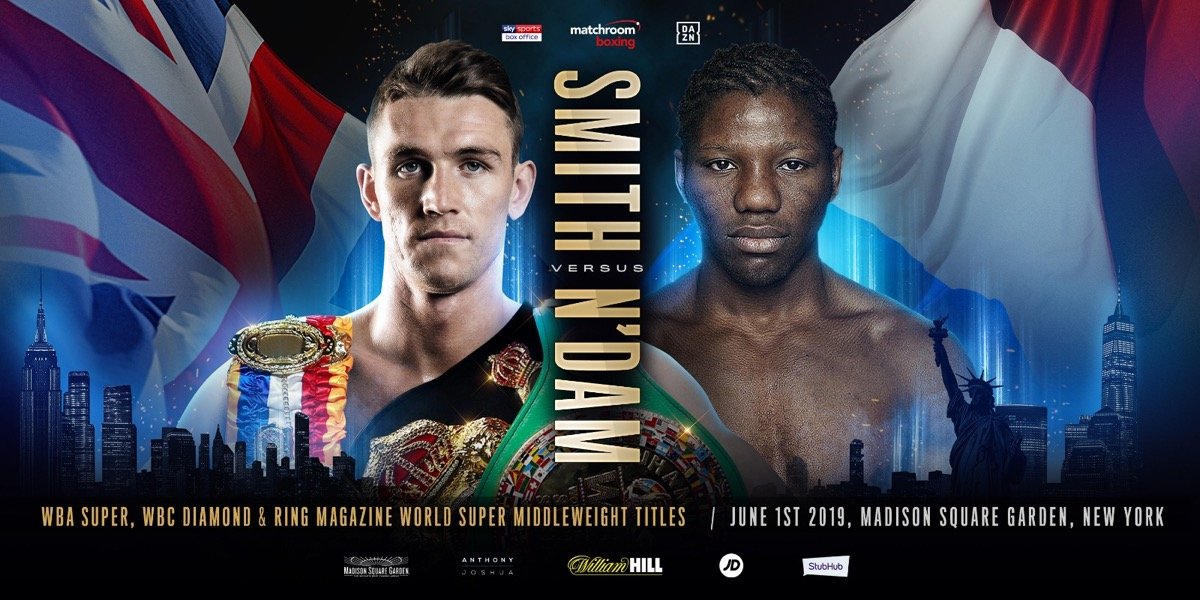 Callum Smith will defend his WBA World ‘Super’, WBC Diamond and Ring Magazine Super-Middleweight belts against Hassan N’Dam on the blockbuster Anthony Joshua OBE vs. Andy Ruiz Jr. World title bill at Madison Square Garden in New York on June 1, live on DAZN in the US and Sky Sports Box Office in the UK.

‘Mundo’ (25-0, 18 KOs) captured the WBA World title and was crowned World Boxing Super Series champion following a stunning seventh round knockout victory over British rival George Groves in Saudi Arabia last September – a win that also saw the Liverpudlian claim the vacant Ring Championship. Smith puts those titles on the line for the first time against former Middleweight World ruler N’Dam in his second appearance as a professional in the US.

N’Dam (37-3, 21 KOs) has operated at World level since landing the WBA Interim Middleweight World title against Avtandil Khurtsidze in 2010. He defended that title twice before losing on points to Peter Quillin with the WBO Middleweight crown at stake. A landslide win over Curtis Steven qualified the Frenchman for a shot at the IBF title in 2015 – an explosive contest with David Lemieux followed with the Canadian coming out on top on the score cards.

In 2017 N’Dam took on London 2012 Olympic gold medallist Ryota Murata for the vacant WBA regular World title, which he won via a split decision. The pair rematched five months later, again on Japanese soil, where N’Dam was forced into retirement in the seventh round. He most recently defeated four-time World title challenger Martin Murray by a 12 round majority decision in December.

“I’ve had a good camp and I’m looking forward to walking to the ring as a World Champion for the first time in my career,” said Smith. “I worked so hard to get where I am and now the task is to keep hold of my titles and target those big fights. To have my first defence at Madison Square Garden is going to be special and it’s another box ticked for me personally. People call it the Mecca of Boxing and I’ve always seen it as a venue that I’d love to fight at one day. The minute that there was a chance of it happening I pushed to make sure that I could be part of this show.

“N’Dam is a good fighter and he’s a former World Champion. He’s only lost to three top fighters and he’s got some great wins on his record. I had him over in England to help me prepare for George Groves so we know each other well. He’s a good mover, has good footwork and can move around the ring pretty well. Experience is on his side and he’s an awkward guy to face. Saying that, he’s definitely a fighter that I should beat and get rid of if I’m on my game.

“I believe that I’m improving all of the time – I’ve even improved since winning the World title. I believe that I’m the best Super-Middleweight in the World. There’s a few fighters in my division who probably disagree with that and rightly so. If I am the best on the planet then I should be able to get rid of Hassan N’Dam and look good doing it.”

“I am confident I will create a big surprise in New York,” said N’Dam. “It is a true privilege for me to be given the chance to fight at Madison Square Garden for the first time in my life. At this stage of my career this is a beautiful opportunity for me to be able to change division and fight for both the WBA World and WBC Diamond titles.

“I am so pleased and proud for this opportunity to be offered to me and I would like to add that even though the challenge is a big one, this does not affect my focus and my determination. Callum Smith is an excellent boxer with many qualities. As he is tall he can impose his own boxing style on most of his opponents. I have much respect for him both as a boxer and a person. I believe it will be a very tactical fight.

“Being able to say that once in my life I have fought at MSG will be a great pride. Besides, I have the experience of boxing on big shows as I have participated in many and in front of thousands of people. I have always defended my titles abroad and I am used to pressure and know how to handle it.”

“This is a huge platform and one that Callum fully deserves,” said promoter Eddie Hearn. “He has established himself as the number one 168 pounder in the World and will prove it at the Mecca of boxing on June 1. N’Dam always brings the action and I believe this will be a high level fight with plenty of fire. The mega fights await Callum and he can’t afford to slip up here, I know him and Joe Gallagher have prepared diligently for this challenge and he will be sending out a statement live on Sky Sports Box Office and DAZN.”

Joseph Markowski, DAZN EVP, North America said: “Credit to Hassan for moving up in weight to take on the world’s No.1 Super Middleweight at Madison Square Garden. Both he and Callum have a great opportunity to make a statement to U.S. fight fans in prime time.”

Adam Smith, Head of Sky Sports Boxing, said: “We’re very excited to add Callum Smith to a huge night at Madison Square Garden. He’s rightly regarded as the world’s best Super-Middleweight after that win over George Groves – and we can showcase more of our best talent on the AJ bill.

“Callum has already been named as a possible opponent for Saul ‘Canelo’ Alvarez and there are massive nights ahead of him if he defeats the proven Hassan N’Dam. It’s going to be an action-packed evening for fight fans as Katie Taylor’s undisputed World title fight and the classy Josh Kelly are also in action before AJ lights up New York in the main event.”