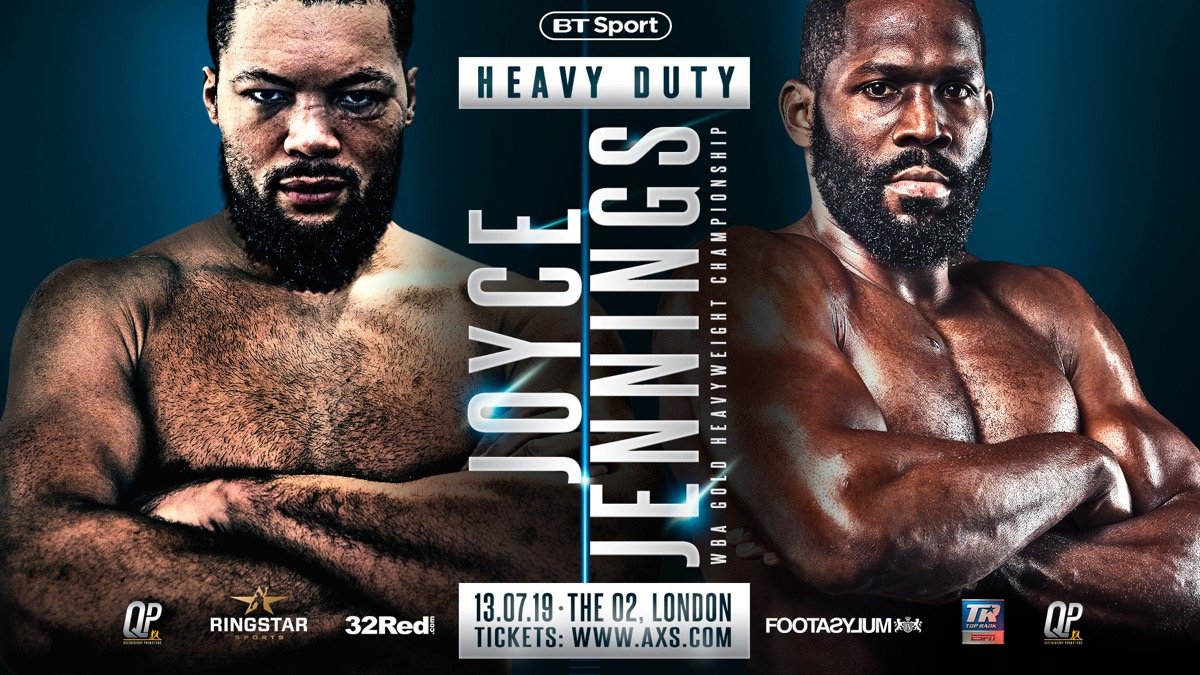 BRYANT JENNINGS INSISTS he is more than ready to counter the threat of the high-volume punching Joe Joyce and claims the Englishman needs to tighten his own defences.

The Olympic silver medallist Joyce is renowned for his relentless style of fighting, continually marching forward delivering punches from all angles.

Joyce, set to enter into double figures as a professional heavyweight, takes on the former world title challenger in the chief support of ‘Heavy Duty’ at the o2 Arena on July 13, headlined by the British title showdown between the unbeaten pair of Daniel Dubois and Nathan Gorman.

Jennings’ 24-3 is unconcerned over the prospect of taking on the Juggernaut, who he believes needs to keep his own guard up on the night.

“He’s gonna have shots coming right back at him and, the last time I checked, his defence is not as good,” said the American. “He can catch every punch – with his jaw!”

While Joyce is relatively new to the professional game with a record of 9-0, Jennings acknowledged that he was familiar with the name, although more through his online activity.

“He came with the accolades and it kind of matched up, so he was just letting himself be known and that is how I knew about him,” added the 34-year-old, who states that his ambitions have not been diminished by suffering a loss in his last fight to Oscar Rivas in January.

“Personally that was just an obstacle that I understood I had to get over,” he reasoned. “Against it being a failed mission, I didn’t necessarily fail the plan. A lot of these guys had hundreds of amateur fights and they lost plenty of them. That was their way of gaining experience and gaining something from those losses they had.

“The fight with Rivas does nothing to me mentally but, in the boxing game, it knocks you down and you lose position. Here it is also, people still love me and I am still that guy. I can live with myself, I’m good.”

Meanwhile, Jennings took a little time out to assess the merits of the fight he says has knocked him off top billing between Dubois and Gorman.

“Well I sparred Gorman a couple of times and he is a bright kid who is pretty good. I’ve heard of Daniel but I have never watched him.

“I just think it is a great match-up, those guys have spent a lot of time in the ring together and have sparred a lot – and they are the main event.

“They have to be something if I am on the undercard of them! I just think it will be a good fight.”