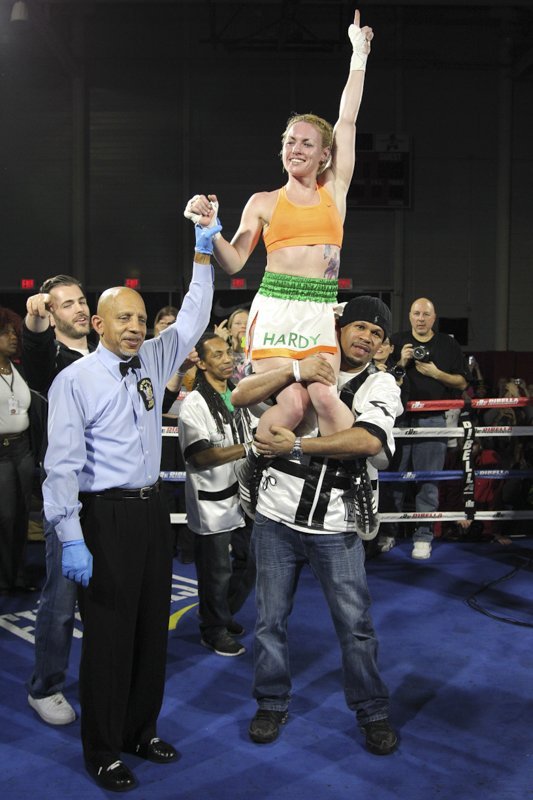 Brooklyn, NY (3/21/14) – Earlier tonight, DiBella Entertainment presented the latest installment of its ever popular Broadway Boxing series with an exciting eight-bout card from the Aviator Sports and Events Center in Brooklyn, NY.

Fighting before a strong contingent of hometown fans, Brooklyn fan favorite Heather Hardy and the Bronx’s Nydia Feliciano went to war in their eight-round female junior featherweight feature bout. Feliciano was easily the toughest opponent of Hardy’s young career, having already fought for a world title in 2012. Round after round, Hardy and Feliciano furiously brawled, bringing the crowd to a standing ovation on a number of occasions. Hardy was the aggressor and pressed the action for the majority of the bout, and in the end, she was awarded the well-deserved unanimous decision, winning by scores of 79-73, and 78-74 twice. It was the most impressive victory to date for Hardy, who improved to a perfect 9-0, 2KO’s.

Joe Smith (right in photo), 178, Long Island, NY, trained by Tommy Gallagher, brawled with the tough Michael Gbenga, 172, Washington, DC, providing exciting two-way action in their scheduled eight-round light heavyweight contest. Smith applied pressure and focused his attack downstairs. After two rounds of punishment to the body, Gbenga was forced to retire on his stool prior to the start of the third frame, citing a rib injury. With the win, Smith improved to 15-1 (12 KOs), while Gbenga dropped to 13-12 (13 KOs).

Coming off his HBO-televised tough decision-loss to Matthew Macklin, middleweight prospect Lamar Russ, 160, 14-1 (7 KOs), Fayetteville, NC, battled Tony Hirsch, 160, 15-6-2, Oakland, CA. Russ was outboxing Hirsch early on, landing his overhand right behind a crisp jab. As the two boxers were pressing forward, an accidental head butt opened up a cut over Hirsch’s right eye in the first frame. In between rounds, however, the ringside physician determined that Hirsch was in no position to continue. As a result, the bout was declared a No-Contest.

Undefeated junior middleweight prospect Patrick Day needed just 39 seconds to stop Duane King with a picture-perfect left hook to the liver in their scheduled six-round contest. The former #1-rated U.S. amateur came out working behind a long hard jab. He followed up one of those jabs with his left hook, a combination that echoed throughout the building. King went down immediately and had no chance of beating the count. It was an impressive showing for the Freeport, Long Island-native who improved to a perfect 7-0-1, 4KO’s.

Fighting before a loud contingency of fans, Bronx’s Christopher Galeano improved to a perfect 3-0 with a four-round unanimous decision over Azamat Umarzoda in their junior middleweight matchup. Galeano, a former amateur national champion, and co-promoted by 50 Cent’s SMS Promotions, boxed beautifully from the outside, landing crisp combinations to both the body and head. Umarzoda hung tough, but just wasn’t able to keep up with Galeano’s speed. In the end, all three judges scored the bout 39-37 in favor of Galeano.

The exciting and promising junior lightweight Joel Diaz improved to 15-0, 12KO’s, winning a hard-fought six-round unanimous decision over game veteran Jose Angel Beranza. Diaz, trained by Abel Sanchez, pressed the action, landing a number of hard shots against the tough-as-nails Beranza throughout the six-round contest. In the end, all three judges scored the bout in Diaz’ favor with tallies of 60-54, and 59-55 twice.

Making his DBE debut, highly regarded middleweight prospect Eduardo Alicea passed the stiffest test of his young career winning a unanimous six-round decision over James Johnson. Alicea, trained by top trainer Robert Garcia and co-promoted with Rumble Time Promotions, was very sharp and accurate with his shots throughout. Alicea worked behind a stiff jab to control the action from the outside. Johnson, who, like Alicea, was a former amateur standout, was game and showed heart, but just couldn’t seem to keep up with Alicea’s output and crisp combinations. After six frames, Alicea was awarded the victory on scores of 60-54 twice, and 59-55. With the win, Alicea moved to a perfect 6-0, 3KO’s, while the heavy-handed Johnson dropped to 7-2, 7KO’s.

Kicking off the card was Queens-native Joseph Williams taking on P.J. Cajigas in a four-round light heavyweight contest. Williams stalked Cajigas from the opening bell, applying relentless pressure. Williams landed big shots with both hands especially to the body. In the third round, Williams landed a big overhand right, followed by a monstrous left hook that sent Cajigas out flat on this back. The referee didn’t even bother to administer a count and officially waved off the contest at 1:49 of round three. It was an impressive showing for Williams, who improved to 2-0, 2KO’s.