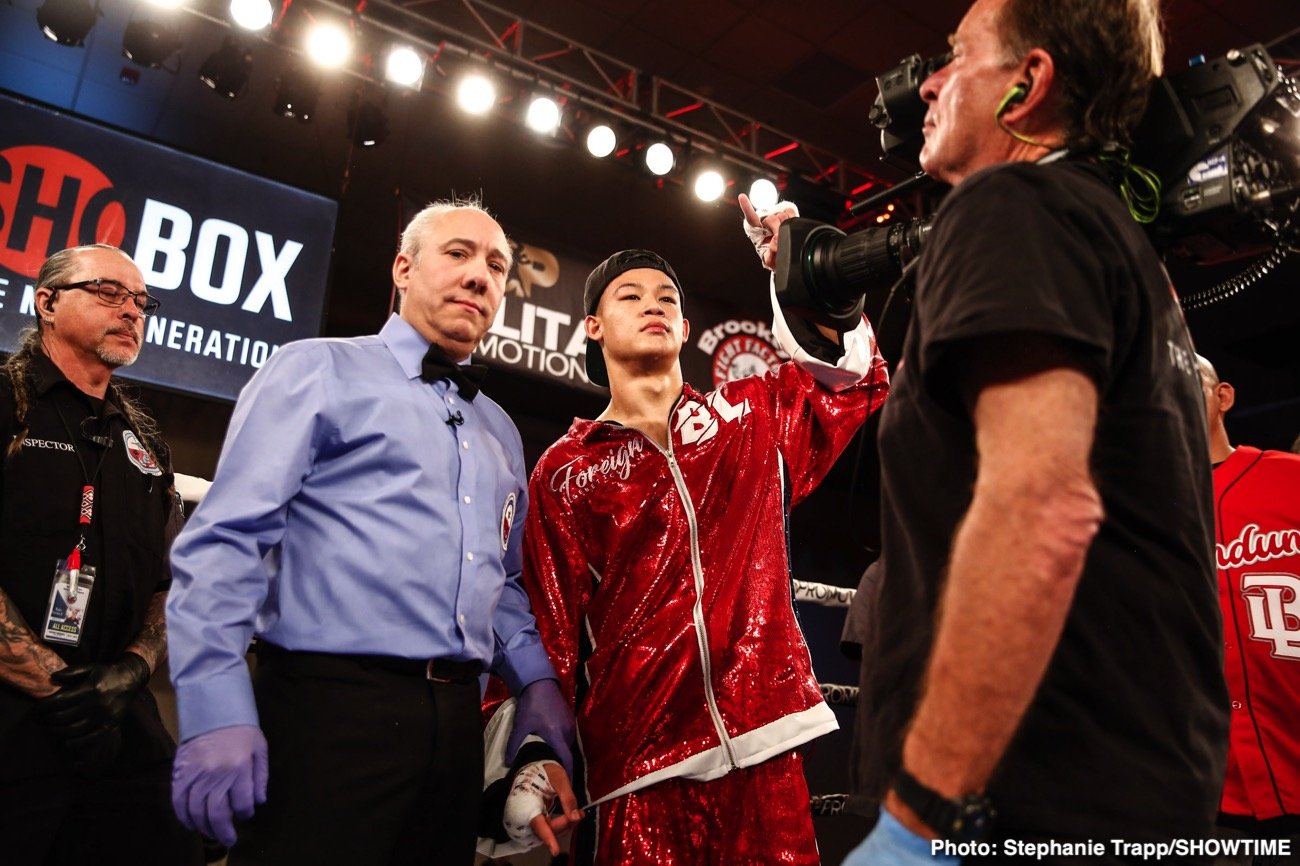 One of boxing’s fastest-rising prospects, Brandun Lee, will return to the “Fight Sphere” at Mohegan Sun in Uncasville, Conn., for the third time when he takes on Samuel Teah Wednesday, March 10 live on SHOWTIME at 9 p.m. ET/PT in the super lightweight main event of a ShoBox: The New Generation telecast.

Lee vs. Teah headlines a four-fight card featuring eight promising prospects with a combined record of 102-4-2.

“Our March 10 ShoBox event, from top to bottom, perfectly represents the philosophy that the series has set forth to accomplish during our 20 years in boxing,” said Gordon Hall, executive producer for ShoBox: The New Generation. “The full spectrum of prospects will be on display in this event from coming-of-age newcomers to a fighter at the doorstep of a world championship fight. In the opening bout, we have a three-time amateur National Champion in Victor Padilla, who is in the infancy of his promising professional career at 8-0, making his ShoBox debut, while atop the bill is Brandun Lee, one of the most promising prospects in boxing, taking on his toughest challenge against a ShoBox veteran Samuel Teah. ShoBox is the ultimate proving ground for prospects, and we will learn a lot about all of these fighters on March 10 on SHOWTIME.”

“All eight fighters competing on March 10 at Mohegan Sun will be tested, and that is exactly what the ShoBox series is all about. I’m proud to promote such an evenly matched event from top to bottom,” said Lou DiBella, President of DiBella Entertainment. “Puerto Rican lightweight Victor Padilla is a knockout artist with blazing fast hands, and he’ll be facing unbeaten Philadelphian Thomas Velasquez. Junior lightweight Misael Lopez returns to ShoBox following his series debut, an upset over touted favorite James Wilkins, now taking on heavy-hitter Jordan White. Philadelphia lightweight Steven Ortiz also returns to the series after debuting with a win against unbeaten Wesley Ferrer, competing against undefeated New Orleans prospect Jeremy Hill. In the main event, towering power-puncher Brandun Lee squares off against crafty veteran Samuel Teah, in his biggest test to date.”

The highly regarded Lee made quick work of the previous two opponents he faced at Mohegan Sun Arena in 2020, scoring a highlight-reel first-round KO of Jimmy Williams on ShoBox in October and a third-round stoppage of Dakota Linger in December. Lee has knocked out all but two of his professional opponents and owns 12 first-round knockouts. Trained by his father Bobby, Lee fought four times in 2020, including a third-round TKO over Camilo Prieto in one of the final live sporting events to take place before the COVID-19 pandemic shut down the sports world for several months in March.

Lee had a decorated amateur career with an estimated record of 196-5. He was the 2015 U.S. Junior National Champion, taking home the gold medal at 145 pounds. With lightning-quick hands that pack power, the exciting Lee has sparred with Mikey Garcia, Devin Haney, Mauricio Herrera, Timothy Bradley Jr., and Thomas Dulorme.

“I’ve just been training in La Quinta, staying safe and healthy and focusing on what I need to do to have another impressive performance,” said Lee. “I see that Teah is a good inside puncher, and he has good speed. He’s a volume puncher, but other than that, I don’t see much that I shouldn’t be able to handle. I’m super excited to be returning to ShoBox in the main event so that my fans can see me live on TV because the fans want to see knockouts, so that’s what I’m going to give them.”

Teah, born in Liberia and fighting out of Philadelphia, has had mixed luck on ShoBox. A three-fight veteran of the developmental series, Teah scored a unanimous decision over then-undefeated O’Shaquie Foster in 2015 but dropped a majority decision to Montana Love in 2018. Most recently on ShoBox, Teah scored a unanimous decision over Kenneth Sims Jr. in November 2018. The 33-year-old Teah, who did not start boxing until the age of 19, also owns an impressive win over Sonny Fredrickson and beat Dieumerci Nzau his last time out in March 2020.

“I don’t mind being the underdog, and it won’t be the first time for me,” Teah said. “I have ShoBox wins against O’Shaquie Foster and Kenneth Sims, Jr., and I always seem to perform better when the lights and cameras are focused on me. I’m looking forward to the challenge.”

Born in Sonora, Mexico, and raised in Denver, Colo., Lopez had a successful amateur career before turning professional in 2016. He compiled an amateur record of 50-5, winning gold at the 2010 Colorado State Silver Gloves Tournament and the Colorado State Golden Gloves Tournament in 2009 and 2015. Lopez’s career-best pro win came on ShoBox in September 2018 when he outboxed James Wilkins’s power-punching in a step-up fight. Trained by his father Evenezer, Lopez has added two wins since then, including a first-round TKO over Richard Flores.

“I can’t tell you how excited I am to be back on ShoBox and, this time, with such a strong team behind me,” said the 24-year-old Lopez. “I respect my promoter, Lou DiBella, a lot and do not doubt that he can put me in the position to become a champion. I’m ready for the challenge and can’t wait for March 10.”

The Washington, D.C. native White was a former No. 1-ranked amateur, amassing a 145-16 record. He was teammates with future world champions Devin Haney and Shakur Stevenson on the Junior National travel squad, competing in the Junior World Championships in Kiev, Ukraine, in 2013. White turned professional at 18, winning his first four bouts, three by way of knockout, before losing a decision to fellow undefeated foe Adam Lopez. White has since bounced back by winning six fights in a row, including a seventh-round TKO over previously unbeaten prospect Ronaldo Solis. White, 23, is the cousin of 2000 U.S. Olympian Clarence Vinson.

“I am honored for this opportunity to fight on SHOWTIME against the undefeated Misael Lopez,” said White. “I respect his fight game, but I am looking forward to displaying my superior skill set. On March 10, there will be lights, cameras, and plenty of action.”

The 27-year-old Ortiz has developed a cult following in his hometown region, fighting seven times in the greater Philadelphia area. Ortiz rallied off five straight wins in the “City of Brotherly Love” before making his ShoBox debut in September 2018, a majority decision victory over then-unbeaten Wesley Ferrer in Shawnee, Okla. Ortiz picked up two wins in 2019, including a unanimous decision over previously undefeated Philadelphian Jeremy Cuevas, but did not fight in 2020. An accomplished amateur, Ortiz is a five-time Pennsylvania Golden Gloves Champion, a bronze medalist at the National Golden Gloves, and a gold medalist at the National Silver Gloves.

“The pandemic was a major setback for me and the careers of many other fighters, of course, but it kept me focused,” said Ortiz. “I stayed in the gym getting ready for when the opportunity came, and here it is. Hill is a tall, awkward fighter, but I am up for the challenge. It doesn’t matter who is in front of me; I am here to fight. This will be my second fight on SHOWTIME, and I feel that this time, I’ll be coming back stronger, both mentally and physically. The audience will see the best of me.”

New Orleans’ Jeremy Hill blends his unique size, accuracy, and power in both hands inside the ring with showmanship and charisma outside of it. A successful amateur who rose all the way to the No. 4 ranked U.S. lightweight amateur, Hill won the Male Elite Champion at the Ringside World Championships in 2017 and turned professional in April 2018 after posting a 55-10 record in the unpaid ranks. Hill, 28, is coming off a TKO over Travis Castellon in November but will be facing his first undefeated opponent in Ortiz since beating the 1-0 Lashawn Alcocks in his fourth pro fight. He also owns a unanimous decision over then-once-beaten Xavier Wilson in July, one of Hill’s four wins in 2020.

“I’m excited and thankful for the opportunity,” said Hill. “I’ve been working hard and grinding for a chance like this. I feel like I’m overdue for this type of fight and this kind of exposure, so I’m just ready to show everyone what I can do. I’m about to cut up on national TV.”

Padilla, 22, was born in Vieques, Puerto Rico, and currently lives and fights out of Berlin, N.J. The all-action, the power-punching southpaw, has stopped all but one of his professional challengers, including six opponents who failed to make it out of the first round. His last time out in January 2020, Padilla needed just 2:46 to stop Israel Suarez-Olmeda. Padilla turned professional in December 2016 after a stellar amateur career that included three National Championships and a record of 90-7. He trains alongside former world champions Tevin Farmer and Jason Sosa under trainer Raul “Chino” Rivas.

“First and foremost, I want to thank God, my family, and my team for keeping me positive through these hard times,” said Padilla. “I am very excited for this opportunity to showcase my skills in front of a national audience. I have sacrificed a lot to get to this point in my career. It takes a lot of dedication to the sport, and I am confident that it will pay off. It has been 13 long years of working hard to show the world who Victor Padilla is and, on March 10, a new chapter will begin. Thomas Velasquez is a good fighter, and this is a good matchup, but may the best man win.”

Velasquez, another Philadelphia native, made his professional debut in 2015 and looked to be rapidly rising through the ranks, winning his first nine fights, including five through knockout. A draw with Tyrome Jones in September 2017 stalled his career to a near standstill, as he did not fight again until 2020, when he scored a third-round KO over veteran Gustavo Molina in his return bout. The 25-year-old will look to regain the momentum he had earlier in his career with a win over the highly regarded Padilla. As an amateur, Velasquez had a 30-3 record and won the Pennsylvania State Golden Gloves. He is trained by Hamza Muhammad, who also trains the newly crowned WBO Junior Featherweight World Champion Stephen Fulton Jr.

“I could not be happier to have this opportunity to show the world what I can do,” said Velasquez. “It doesn’t matter who is standing in the opposite corner; I fight to provide a better life for my twin daughters. I look forward to putting on a spectacular performance on March 10 and leaving that ring with my unbeaten record intact.”