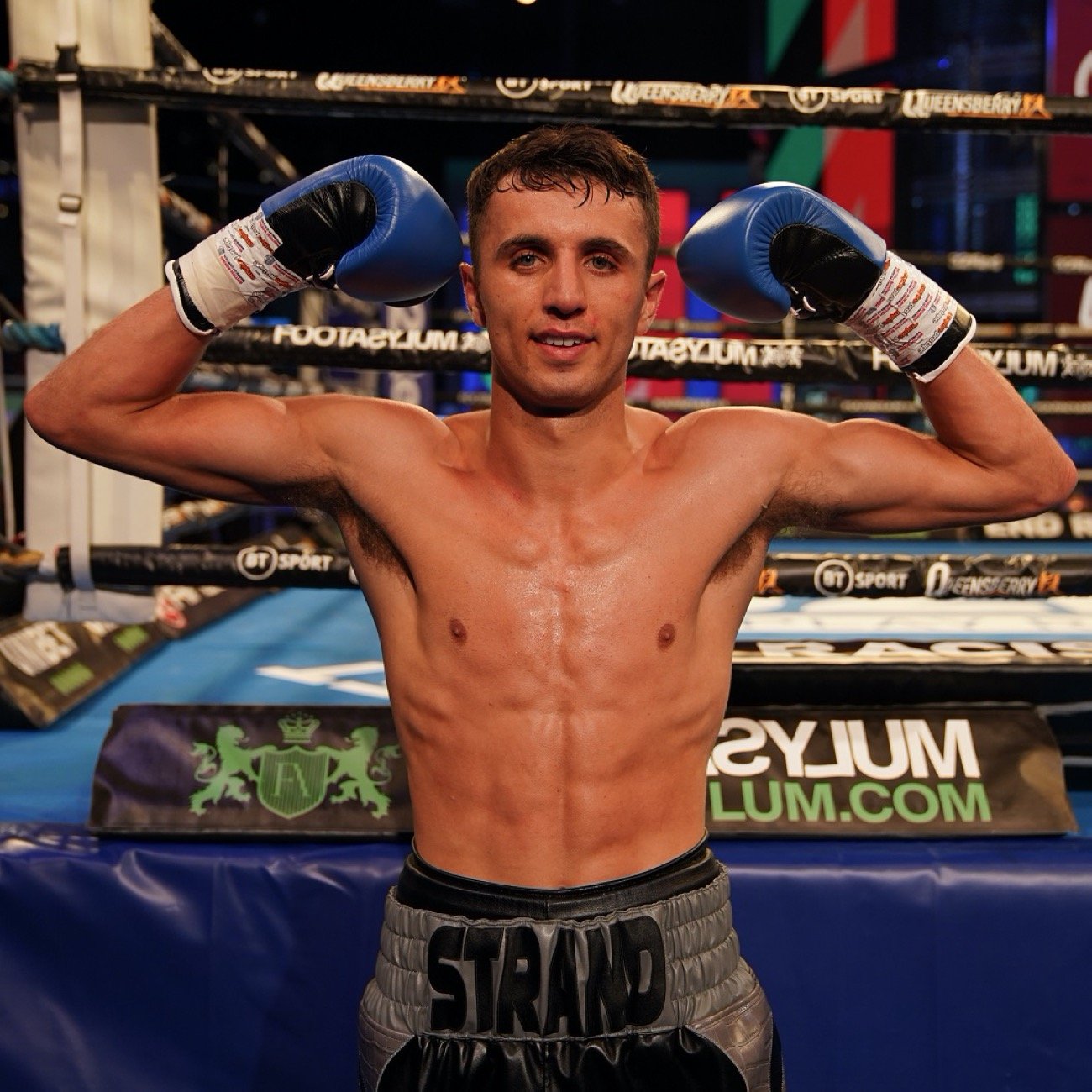 Brad Strand won his first fight on TV in July

The Everton Red Triangle gym in Liverpool saw three of its prospects all add another win to their perfect records on Queensberry Promotions’ five-fight card behind closed doors at the BT Sport Studios in Stratford on July 31.

The trio were not only making their BT Sport debut, but also having their first ever fight under the Queensberry Promotions banner after signing contracts with Frank Warren in February.

KO king Andrew Cain (6-0, 6KOs) kicked off the show in style by scoring his sixth stoppage from six fights, while teammates Nick Ball (13-0, 6KOs) and Brad Strand (4-0, 1KO) prevailed on points on the undercard of the Lyndon Arthur vs Dec Spelman Commonwealth light-heavyweight title clash.

2018 ABA Elites champion Brad Strand, 23-years-old from Liverpool, had a tricky task in the shape of experienced campaigner Brett Fidoe (13-64-5, 6KOs), who boxing expert Steve Bunce rates as the best journeyman in Britain.

The 29-year-old Midlander, who has defeated Central Area and English champions in the past, gave a good account of himself from the away corner in what proved to be a competitive contest.

Fidoe had only been stopped once in over 80 contests – by Andrew Selby – until he met Dennis McCann two weeks on from his fight with Strand on August 15 on another BT Sport show.

Strand established his jab early, using it to continually push back his oncoming opponent. His footwork and jab kept him elusive throughout and his class and skill were clearly on display for all to see. Fidoe drew some blood from his young opponent but would ultimately fall to a 40-36 points defeat.

Strand evaluated his latest performance, “When I first got out the ring, I had a little bit of a problem with myself, thinking I didn’t box that great, but when I watched it back I done better than what I thought I did.

“Obviously, you’re always your own worst critic aren’t ya’, but I know what I could have done better, but that’s just what – in your next camp – the things that you work on and put right.”

“He’s the one who is teaching us all every day. He has a base of what he teaches us all, but he also works with us all individually too. He’s got loads of boxers to work with, so must be hard for him but he’s good at what he does.”

Stevenson has a group of seven unbeaten prospects he trains daily at the century-old, historic gym, as well as guiding Commonwealth Games 2018 gold medallist Peter McGrail to qualify for the Tokyo Olympics and collect medals in seven major tournaments around the world.

The talent-laden gym is beginning to attract attention for its exciting prospects. Although Brad recognises its rising profile and exciting expectations, he admitted that it is a different feel for him.

Talented trio Strand, Ball and Cain all signed contracts with Hall of Fame promoter Frank Warren in February this year, which gave the entire gym a boost in morale and ambition.

“It was Paul that put us forward and we went down to the office and signed our contracts, and we were all made up but then lockdown started. It was in the middle of lockdown when we got a call to say that we could be boxing, so I was made up to be fighting because we wasn’t expecting it.

“For the first few weeks of lockdown, the gym was closed, so I was just doing runs and little circuits in the garden; just whatever I could do really. Had quite a long camp, to be honest, like seven or eight weeks.

“Three of us in the same gym, all on the same bill on tele, it probably doesn’t happen a lot, so it’s boss for us to be training and fighting together.

“It was probably my best fight to date in terms of where it was and being on tele, so I’m made up. I’m heading in the right direction so just got to keep on going.”

Despite the uncertainty, the youngster is hopeful of getting to 5-0 at the end of 2020, a year where many boxers haven’t even fought at all.

“There’s loads of boxers that want to be fighting so we’re one of the lucky ones really – me, Nick and Andrew.

“Hopefully, I’ll get another one in before the end of the year; that will be nice for me.”