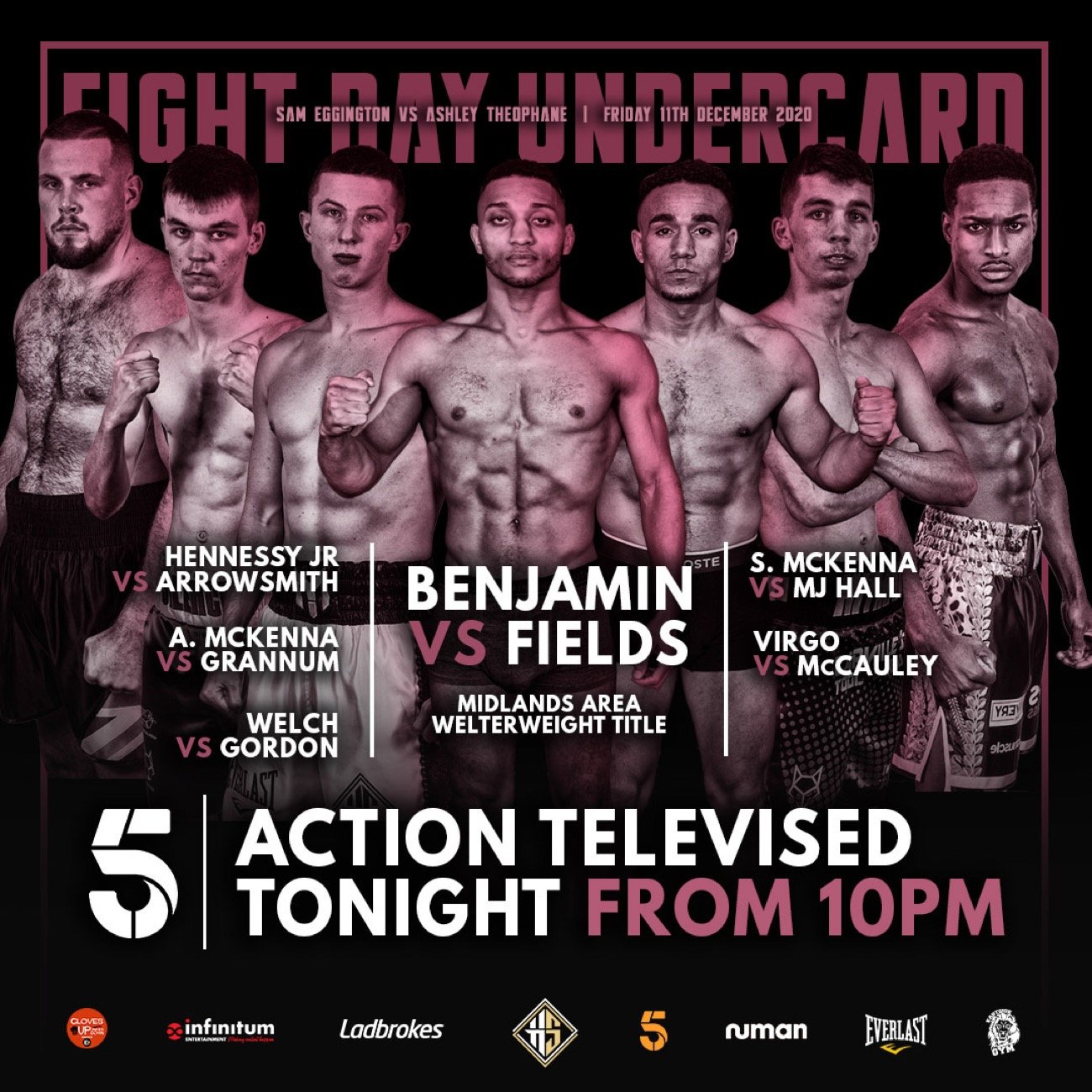 Mick Hennessy is thrilled to announce that broadcaster Channel 5 will televise all of the fights on his event tonight (Friday 11th December) from the Fly By Nite TV studio in Redditch.

The show starts live and free on Channel 5 across the UK at 10pm and opens with the highly anticipated domestic super-welterweight showdown between Sam Eggington and Ashley Theophane.

Hennessy is delighted that Channel 5 will broadcast all the fights to ensure fans get to see all the action and drama tonight. He said, “For fight fans Channel 5 is the only place they need to go for a night of free and live boxing action. It’s a real pick ‘em showdown between the battle hardened warriors Eggington and Theophane that has the boxing community divided. Also on the card fans will see a fiery Midlands derby between Benjamin and Fields for the area title, new and exciting talents like Stevie and Aaron McKenna, and the continuing careers of Idris and Michael, plus there’s plenty of curiosity around the pro debut of Tommy Welch to see if he’s like his dad.”

London, UK (1 December 2020) To highlight the tragic impact of knife crime, Hennessy Sports and Channel 5 have partnered with charity ‘Gloves Up, Knives Down’ to place four empty chairs at ringside of its Friday 11th December boxing show to represent the number of people who sadly lose their lives to knife crime in the UK each week.

Mick Hennessy, Hennessy Sports, said:
“It’s fantastic that fans are being let back into sporting arenas but it’s important we don’t forget those unable to attend, especially due to tragically having their lives taken away from them.

One empty chairs represents a person who is no longer with us because of knife crime and we’re humbled to be working with Gloves up, Knives Down to highlight this ongoing issue, as well as being able to showcase how the sport of boxing can have a positive impact on people’s lives within the community and at grassroots level.”

Joe Brett, Founder of Gloves Up Knives Down, said:
“Sadly, we have seen a huge increase in knife crime across the UK over the last few years. It’s easy for people to dismiss this as a statistic – but these are real lives lost, young people robbed of their futures, and real families and communities devastated.

Gloves Up Knives Down believe that the redemptive qualities of boxing; discipline, respect and self-worth can have a profound effect on the lives of the young people, and communities plagued by knife crime and we are committed to helping as many people as possible.

So, we are proud to have teamed up with Hennessy Sport and Channel 5 to spread this message.”

Ashley Theophane, Headline Fighter, said:
“Knife crime is unfortunately still going on. Not much has changed from when I was a teenager. Investment needs to be put into youth services to help these kids channel their energy into achieving their hopes and dreams.

Coming from this kind of background, I know that boxing helped me fulfil my childhood ambitions.”

“Knife crime affects every resident in every community. I know this from personal experience.

I was a youth worker for over twenty years, helping young people get out of crime. Before that, I was a kid growing up in a council house surrounded by gangs and drug-dealers.

So I know that charities like Gloves Up, Knives Down do fantastic work. They are a youth club, a gym and an anti-knife crime organisation all rolled up into one.

When I was younger, gymnastics and the Army Cadets kept me on the straight and narrow. Boxing can do the same thing for young people today.”

Each chair will be signed with a message of support by a variety of boxers and personalities attending the show and auctioned off to raise money for the charity at a later date.

The seats will be in place for when battle hardened fighters Sam Eggington and Ashley Theophane clash on Friday 11th December in what is expected to be a real boxing battle in a 12-Round International Contest, exclusively live in the UK on free-to-air Channel 5.

Outside of the ring Theophane has done incredible work in his community to raise awareness of youth knife crime through going into schools and talking to kids to encourage them to take up  boxing training and get off the streets.

Presented by Mick Hennessy for Hennessy Sports in association with Ladbrokes, Infinitum, Numan and Everlast, the show will be staged at the Fly By Nite purpose built TV production facility in Redditch from 10pm.