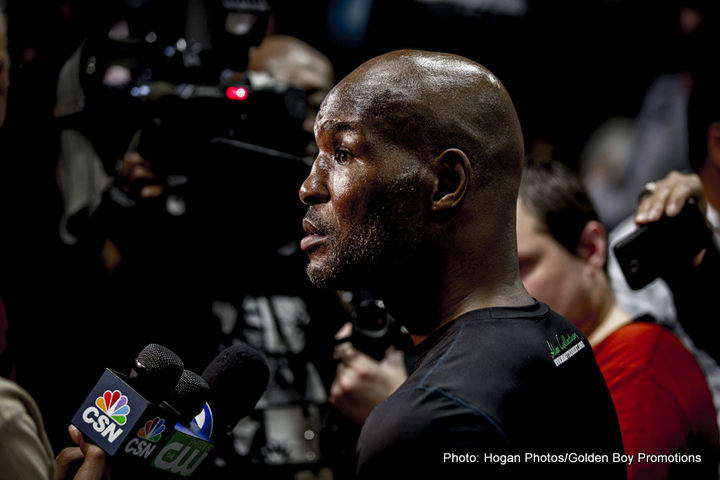 The continuing success of “The Alien” can make it easy to forget just how long Hopkins has been a part of the professional boxing landscape.

The world’s population more than double, from 3.3 billion to over 7 billion

A 23-year-old Hopkins turned professional in October 1988. How long ago was that?

Ronald Regan was President of the United States

“Rain Man” was the top film of the year

Hopkins earned his first world title shot, a loss to Roy Jones Jr. in May 1993. At that same time:

Mike Tyson was a prisoner in Indiana

The USSR had collapsed

Hopkins began his historic reign as middleweight champion with a seventh-round stoppage of Segundo Mercado for the IBF crown in May, 1995, the same time that:

2001 was a banner year for Hopkins as he earned a place in the middleweight unification tournament. He defeated Keith Holmes for the WBC crown in April and set his sights on WBA Champion Felix Trinidad in September at Madison Square Garden. Their classic encounter was delayed two weeks by the events of 9/11, the then-36 year old Hopkins memorably stopped “Tito” in 12 rounds and tied Carlos Monzon’s record for consecutive title defenses at 14. Hopkins did this while:

The year 2004 would be memorable for Hopkins as he rose to the top of the pound-for-pound ranks following Antonio Tarver’s defeat of Jones and in September knocked out Oscar De La Hoya in the ninth round to become the first person to unify four titles in any weight class while at the same time:

An electric young speaker at the year’s Democratic National Convention named Barack Obama would be elected to the U.S. Senate just months later

LeBron James, Carmelo Anthony and Dwayne Wade had all just finished their rookie seasons in the NBA

Hopkins finally lost the middleweight crown in 2005 and, at age 41, decided to jump two weight classes to start the next phase of his career. In June 2006, he defeated Antonio Tarver for the Ring Magazine Light Heavyweight title.

In 2009, Sergey Kovalev would turn professional with a first round knockout. By this time, Hopkins had already fought 56 times professionally.

Throughout the Philadelphia-native and five-time world champion’s illustrious career, only one major sports team from Philadelphia has won a championship, the 2008 Phillies.

In the summer on 2014, Hopkins watched former foes De La Hoya, Trinidad, and Calzaghe go into the International Boxing Hall of Fame together.

Then, he signed to fight Kovalev.

Bernard Hopkins belongs to history even as he keeps making it.

HBO Sports presents the fall’s most-anticipated boxing event when WORLD CHAMPIONSHIP BOXING: BERNARD HOPKINS VS. SERGEY KOVALEV AND SADAM ALI VS. LUIS CARLOS ABREGU is seen SATURDAY, NOV. 8 at 10:45 p.m. (live ET/tape-delayed PT) from historic Boardwalk Hall in Atlantic City, exclusively on HBO. The HBO Sports team will be ringside for the event, which will be available in HDTV, closed-captioned for the hearing-impaired and presented in Spanish on HBO Latino.

The most accomplished light heavyweights in boxing take the spotlight when Bernard Hopkins (55-6-2, 32 KOs) meets Sergey Kovalev (25-0-1, 23 KOs) in a red-hot title unification fight scheduled for 12 rounds. The bout marks Hopkins’ 22nd appearance on HBO and Kovalev’s fifth appearance on the network in a 15-month span.

Philadelphia native Hopkins, who continues to defy the odds and the critics, enters the ring two months shy of his 50th birthday as the oldest champion in history. Widely considered one of the greatest middleweights ever, with victories over Oscar de la Hoya, Roy Jones, Jr., Antonio Tarver and Felix Trinidad, he unified middleweight titles when he defeated Beibut Shumenov by split decision in April. As the more traditional boxer, Hopkins will seek to use ring generalship and veteran savvy to again unify titles.

Sergey “Krusher” Kovalev, 31, is one of the most feared light heavyweights today. During his five years as a pro, only one opponent has lasted more than seven rounds against the heavy-handed Russian, who currently owns a nine-fight knockout streak. He will look to extend that run in Atlantic City, which has hosted his last two title defenses.

In the opening bout, Brooklyn’s Sadam Ali (20-0, 12 KOs) squares off against Argentina’s Luis Carlos Abregu (36-1, 29 KOs) in a ten-round welterweight fight. The undefeated Ali, 26, is a rising prospect making his third ring appearance of 2014. Abregu, 30, knocked out the undefeated Thomas Dulorme in his last appearance on HBO in 2012. He holds an impressive seven-fight winning streak since his only loss, against former welterweight champion Timothy Bradley. The winner will likely enter the discussion of world title contenders in this competitive division.