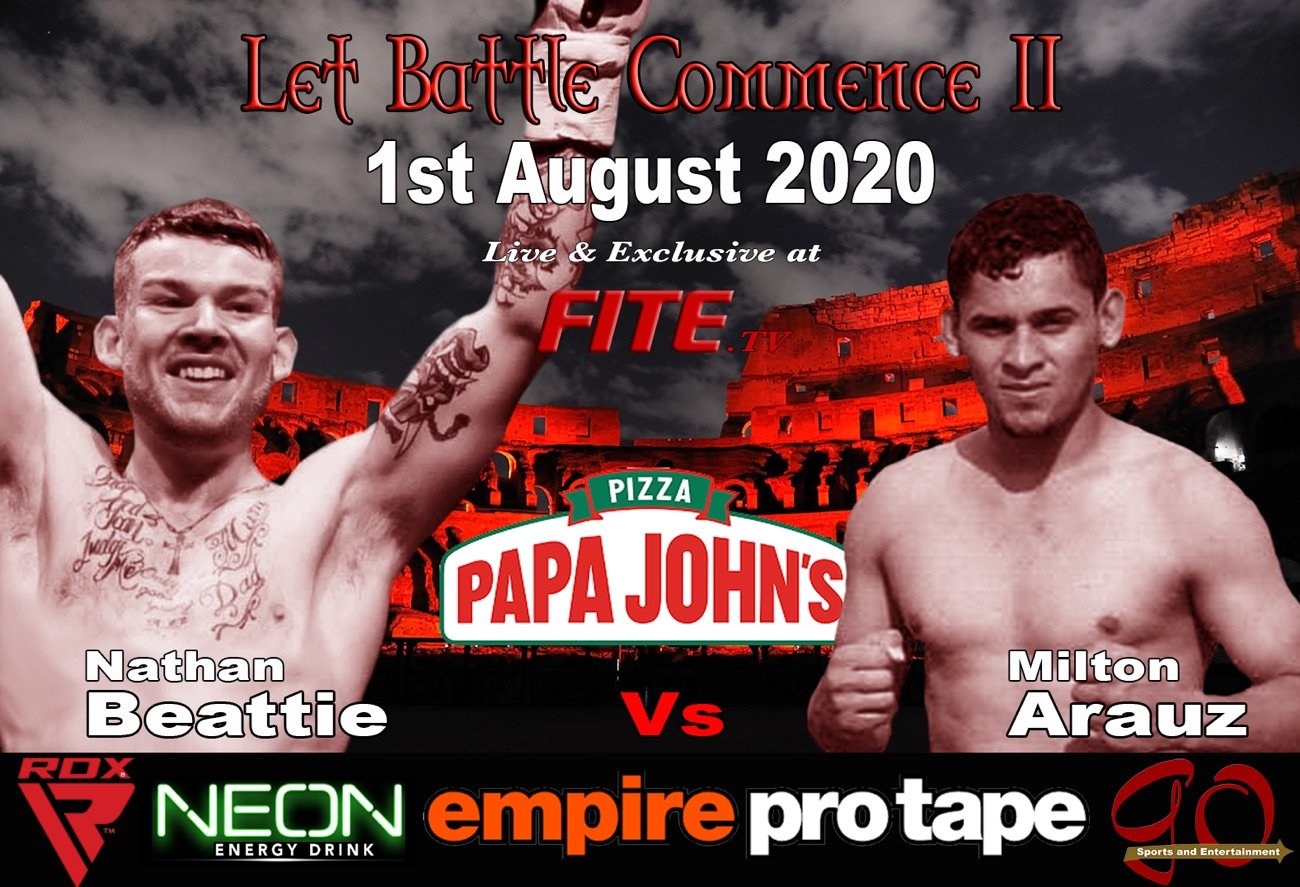 Aberdeen’s, reigning World Boxing Union (WBU) and Professional Boxing Council (PBC) International Champion, Nathan Beattie (10-4-0) is set to go toe-to-toe with Jinotega, Nicaragua’s Milton Arauz (10-3-1) in a six round non-championship contest as the headline fight of the second edition of the Lee Mcallister promoted LET BATTLE COMMENCE series, in Association with PAPA JOHN’S PIZZA and NEON ENERGY DRINK this coming Saturday at the OYO Northern Hotel in Aberdeen, which will be broadcast exclusively live on FITE TV.

The first edition of the ‘behind closed doors’ series, that took place back on July 18th, was headlined by the return of lineal World Boxing Organization (WBO) Featherweight World King Scott Harrison (28-3-2), who was victorious on his return with a third round stoppage over Orkney based Liverpudlian Paul Peers (7-5-0).

The opening two contests were both decided by knockouts, local Teenager Liam Allan securing a second round stoppage win on his debut over Puerto Rico’s Jose F Leon and Perth’s Adam Stewart scored a fourth round stoppage victory over Alexander Zeledon, who in February just before the lockdown came into force had beaten Manchester unbeaten prospect Dan Booth.

This coming Saturday’s event follows the same all action format of five contests, one featuring a current Champion, one Female contest, two ‘Prospects’ contest and a bout featuring a debut, each limited to a maximum of six rounds in order to comply with the Government’s current post lockdown guidelines and are:

PBC & WBU International Champion Nathan Beattie (10-4-0) has a seriously tough night ahead, when he steps in the ring with Nicaraguan Milton Arauz (10-3-1)

A truly mouthwatering contest sees Worksop’s Nicola Hopewell (1-0-0) go toe to toe with Tasha Boyes from York, who will be making her professional debut.

Liverpool’s Scott Mcintyre (4-1-0) will take on the seriously tough Nicaraguan Wilmer Gonzalez (21-18-1), who just a few fights back Knocked out a WBF European and International Champ.

Denny’s Kevin Traynor (2-0-0) will need to be at his best when he takes on the current International Masters Champion, Nicaraguan Pablo Narvaez

The opening fight of the night will pit debutant against debutant as Craig Dick takes on Michael Bassett, both the big lads have stated they will be looking to make a big impression on the 1st August.

Exciting former Amateur Star Nicola Hopewell is set for her second pro boxing outing this coming Saturday, when she faces Yorks’ Tasha Boyes in a six round contest, as main support for Nathan Beattie (10-4-0) versus Milton Arauz (10-3-1) at the Northern Hotel in Aberdeen on the Lee McAllister promoted LET BATTLE COMMENCE II, in association with PAPA JOHN’s PIZZA and NEON ENERGY DRINK which will be broadcast live and exclusive on FITE TV on Saturday 1st August 2020.

As an Amateur Hopewell, a former England Pathway Squad member, shared the ring with a host of top class fighters including Commonwealth Gold Medalist and now undefeated pro boxer Lisa Whiteside and GB boxer Tori Ellis Willetts who is on the pathway for the Olympics. During her time at the Team GB facility in Sheffield Hopewell also sparred with the likes of double Olympic Gold Medalist Nicola Adams as well as WBC International Championship Challenger Nina Bradley and IBO and WBC World Champion Terri Harper.

On her pro debut back on March 7th this year, Hopewell beat Ghanaian former Elite Amateur Anita Addy, to secure her first pro victory via a second round stoppage.

Hopewell’s opponent on Saturday will be 28 year old Tasha Boyes from York, who only got into boxing a couple of years ago, after hearing about two sisters whose parents had died in the Manchester Bombing and she wanted to do something to help them in some way, so she decided to participate in a ‘White Collar’ boxing event to raise money for the orphaned sisters.

Boyes’ second ‘White Collar’ outing was also to help someone in desperate need, this time a local boxer’s disabled daughter. By now Boyes was hooked and continued to compete on the unlicensed circuit, ultimately winning the British Challenge Title, then earlier this year she successfully applied for her professional license, but then within days everything came to an abrupt halt as the Nation went into lockdown.

Boyes clearly has a great approach to life, the sport of boxing, as well as the challenge ahead of her on Saturday, as was made clear by just one comment she made in a recent article in Fight Post where she said “Going pro and doing my pro debut, it’s more to see where I’m at. I’m not too worried about getting a couple of losses. Like I say, I’m more about challenging myself.”

Nicola Hopewell and Tasha Boyes careers may have been via very different routes, but come Saturday night their journeys will lead to the very same ring.

Nicola Hopewell versus Tasha Boyes is the main support for the Nathan Beattie non-championship clash against Milton Arauz, that headlines the Lee McAllister promoted LET BATTLE COMMENCE II, in association with PAPA JOHN’s PIZZA and NEON ENERGY DRINK which will be broadcast live and exclusive on FITE TV on Saturday 1st August 2020.

The undercard also features Liverpool’s Scott Mcintyre (4-1-0) who will take on the seriously tough Nicaraguan Wilmer Gonzalez (21-18-1), who just a few fights back Knocked out a WBF European and International Champ, Denny’s Kevin Traynor (2-0-0) who will need to be at his best when he takes on the current International Masters Champion, Nicaraguan Pablo Narvaez The opening fight of the night will pit debutant against debutant as Craig Dick takes on Michael Bassett.