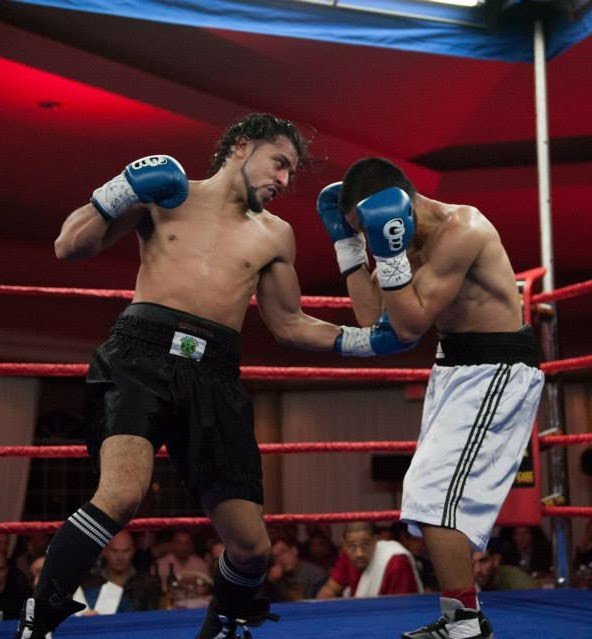 Banner Promotions is proud to announce the signing of undefeated lightweight, Golden Garcia to a promotional contract.

Garcia began boxing at the age of 12 when he walked in to a gym to get in shape.

“I got into a few scraps in the street, so it was nice to go to a place where fighting was allowed,” said Garcia.

Garcia had about 60 amateur bouts, where he competed at 130 pounds.

Garcia turned professional on June 28, 2014 with a 2nd round stoppage over Michael Gargouri in Quebec, Canada. He has fought all of his bouts in Canada, which included a win over Oscar Mejia (10-2-1).

In his last bout, Garcia stopped Adalberto Borquez on March 24th in Montreal.

Garcia is a pressure fighter, that throws a high volume of punches, and tries to overwhelm his opponents. Garcia prides himself for his endurance and he believes that the longer the fight goes, the better he is.

“This is a great opportunity for me to step up. I will get better chances to show off my skills, and being with Banner Promotions can help me get farther in my career then I could imagine,” said Garcia. “I am looking forward to this partnership, and together we will do big things.”

Said Garcia’s manager, former world champion, Otis Grant, “Golden has a lot of potential. He is a very hard worker. I have confidence in Artie Pelullo and Banner Promotions. I was his 1st world champion. This will open the door to sign more fighters with Banner. I have a lot of good fighters, and I am looking to send more to Artie.”

“I am happy to be working with my 1st world champion Otis Grant, and his brother Howard. They have a terrific eye for talent, and Golden will be the 1st of many fighters that we will be working together, to bring to world championships,” said Banner Promotions President, Artie Pelullo.

Super bantamweight action hero Jesse Angel Hernandez has entered the IBF’s world rankings at #14 and is now gunning for their champion, Australia via Ireland’s
TJ Doheny.

In the last year and a half, Hernandez (12-1, 7 KOs), a southpaw from Fort Worth, Texas, has turned in three sensational Showtime-televised performances.

In August 2017, he stopped then-undefeated Russian Vladimir Tikhonov in five rounds. Then in November 2017, he took the undefeated 0 of Batlimore’s Glenn Dezurn via unanimous decision. Finally, Hernandez cemented his status as a TV favorite with a thrilling split decision over the very game Ernesto Garza III in January of this year.

“The plan has always been to fight for a world title and become a world champion!” said Hernandez. “I beat several top-rated and world-rated contenders already and if I need to beat some more before I get my shot, it’s no problem. Knowing that I’ve cracked the top 15 lets me know that we are headed in the right direction and my time is coming. Whoever it is I fight, I know that I must be 100 percent ready. There are no easy fights at this level and I will continue to show that I am the best super bantamweight in the world.”

His promoter, Dmitriy Salita, says that Hernandez will have a great 2019.

“Jesse is one of the best and most exciting fighters in the super bantamweight division. His aggressive, exciting style and world-class body punching make him a real attraction in this environment. Jesse is a Mexican American with a growing fan base. The sky is the limit for him next year.”