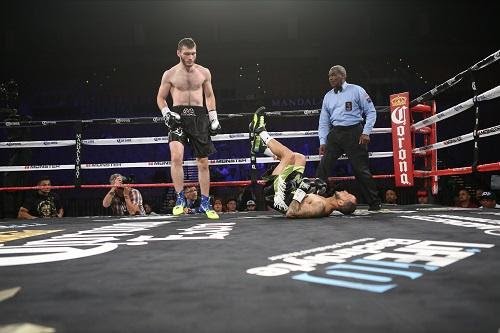 Bakhram Murtazaliev (11-0, 9 KOs) of Grozny, Russia will face Kenneth McNeil (11-3, 8 KOs) of Birmingham, Alabama, in the first defense of the IBA Super Welterweight World Title he won at The Garden in November.

Murtazaliev, 25, has quickly made a name for himself since coming to the United States in 2016. He hopes to extend his seven-fight knockout streak and improve his already impressive 82% knockout ratio (9 KOs in 11 wins). This will be his third fight under both the Krusher Promotions’ and Main Events’ banners.

McNeil, 28, is coming off a win in his last bout, and a split decision with Samuel Clarkson many observers believe he won. McNeil has never been stopped, so Murtazaliev’s goal of extending his knockout streak will be put to the test in his toughest fight to date.

After winning the title at Madison Square Garden in November, Murtazaliev said of the experience, “It looked like what I dreamed all my life.”

Murtazaliev was able to return home to Russia for a holiday visit with family and friends, but then it was back to sunny Oxnard, California to train with Abror Tursunpulatov, who also trains two-time Light Heavyweight World Champion Sergey Kovalev.

“In my preparation, my path is to do. Abror’s is to tell us what to do. Today, he tells us to throw rocks. Tomorrow, he may tell us to throw people. He has a plan … we trust him,” said Murtazaliev.

Murtazaliev recently marked his first anniversary training with Tursunpulatov. “I started to train with him and I really understood what he was saying. It made huge sense to me. I enjoy every day with Abror. I love training with the other boxers, and Kovalev too.”

Murtazaliev says he’s working hard to impress fans and achieve success in the ring. “I’m putting all my heart into practices and all my heart into my fight March 3rd. You aren’t going to be disappointed,” promised Murtazaliev. “I will try to gain more fans, to show nice boxing. I really work hard, and it’s all due to hard work. If you work hard, you will get everything you want in your life.”

There are a few big fans who won’t be watching the young super welterweight on March 3, though. “Nobody from my family has ever seen live video of my fights,” said Murtazaliev. “They are worried about me and they don’t want to see me get punched,” he laughed. Murtazaliev says only his father has ever watched him fight live, in Russia.