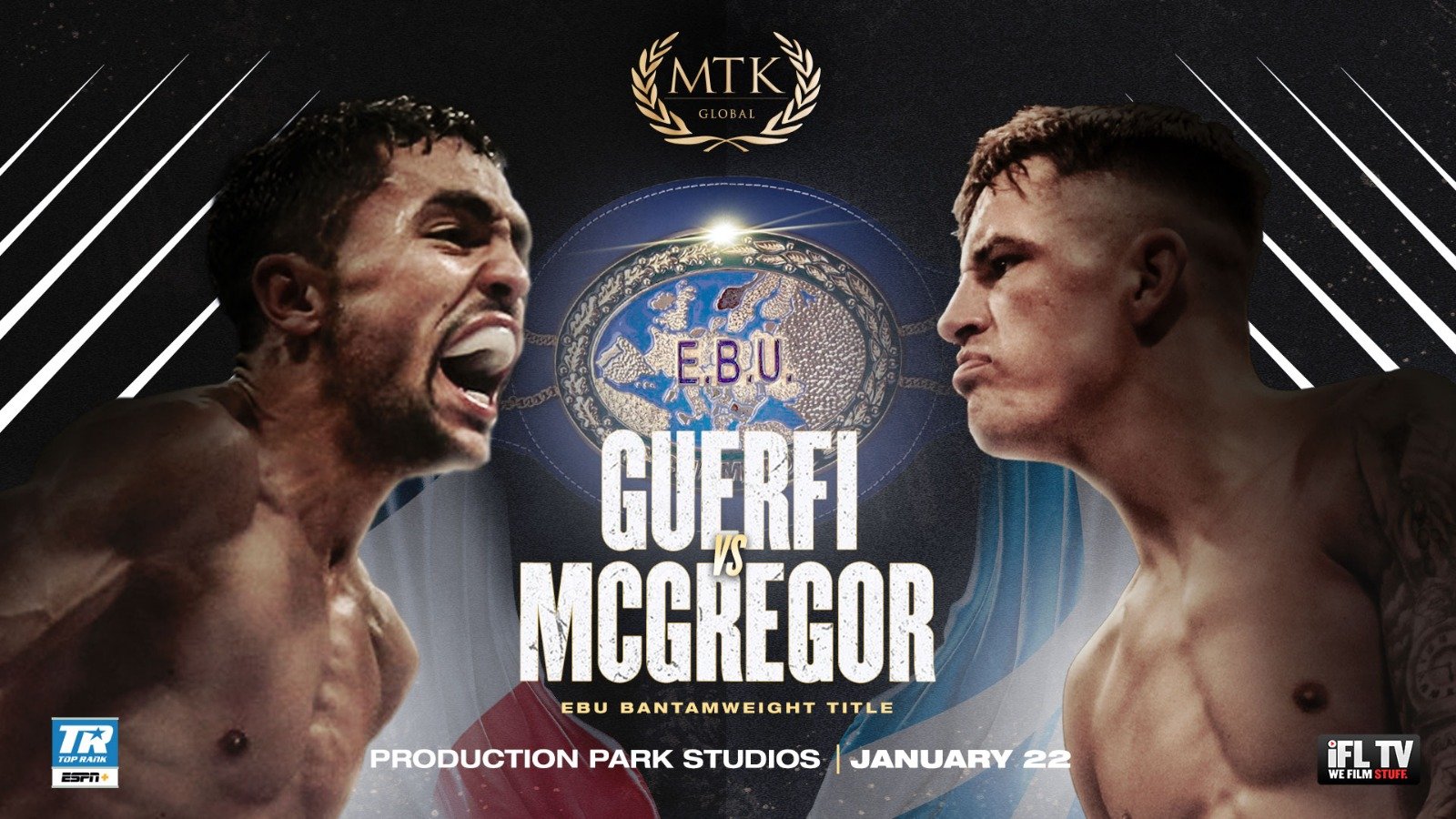 Lee McGregor feels he wants it a lot more than Karim Guerfi ahead of their European bantamweight title showdown on Friday’s huge #MTKFightNight. British and Commonwealth champion McGregor (9-0, 7 KOs) will look to add another belt to his collection when he challenges Guerfi (29-4, 9 KOs) for his European title at the University of Bolton Stadium, live on IFL TV.

The undefeated Edinburgh star is excited to finally have the chance to face Guerfi, and is confident that he will have far too much for the Frenchman.

McGregor said: “There will be doubters, but I believe in myself and my team believes in me and that’s all that matters. I’m very confident I can pull this off. Guerfi may be a lot more experienced than me, but I’m younger, fresher and hungrier than him.

“My professional career has been fast-tracked. I fought for my first title in just my fourth professional fight which doesn’t happen very often with many fighters.

“I could now be British, Commonwealth and European champion after just 10 fights of my career, and that is something which I would be very proud of.

“I feel like I’ve really gelled with Ben Davison since we started working together. He’s been fixing me and helping to make me the finished article, so I’m excited to see how far we can go.”

Karim Guerfi: I will show the world what I can do!

Karim Guerfi plans on putting five months of frustration behind him when he finally defends his European bantamweight title against Lee McGregor on this evening’s action-packed #MTKFightNight.

The pair have been desperate to face each other for months, and Guerfi has vowed to produce a performance that will get everybody talking about him.

Guerfi said: “I am very happy that the fight is finally here as I have waited for this day for five months. It is time to show the world what I can do. I’m coming to keep my belt and I am going to get the win.

“The extra time didn’t matter to me, I have been ready since day one. I have trained hard and I am ready for a good challenge. All I want to do is fight great opponents so I can’t wait.

“I will be representing my country with great pride. My country and my city believes in me, and I will get this victory for them.”

Maxi Hughes: I’ve had an ‘I told you so’ moment with myself

Maxi Hughes has revealed how the last six months has made him realise his full potential in the boxing ring ahead of his vacant British lightweight title showdown with Paul Hyland Jnr on Friday’s #MTKFightNight.

Since August 2020, Hughes has picked up incredible wins over Jono Carroll and Viktor Kotochigov, and he’s relishing his new lease of life ahead of his plans to secure the British title.

Hughes said: “I’m very excited to be fighting for the Lonsdale belt. It’s such a beautiful & prestigious title and I’m looking forward to adding it to my collection.

“When I got the phone call from Lee Eaton about stepping in for this fight I accepted immediately, there was absolutely no hesitation. It’s been very refreshing over the last 6 months, almost like an ‘I told you so’ moment I’ve had with myself.

“I’ve always known what I’m capable of and it was just a matter of delivering it and getting the result. It will be the same on Friday when I win the British title.

“I feel I know enough about Hyland Jnr. I’m expecting the very best version of him come fight night. I anticipate he’ll bring the fight to me but I believe I’ll have an answer for everything.”

Paul Hyland Jnr has vowed that he will be taking the British lightweight title with him back to Belfast when he faces Maxi Hughes on tonight’s massive #MTKFightNight.

Originally Hyland Jnr was due to face Liam Walsh for the title before Hughes stepped in, but he insists the change of opponent won’t be a problem.

Hyland Jnr said: “I know Maxi is a talented boxer and very experienced, but I’m really looking forward to this fight. I respect him as an opponent as I do with everyone, but I’m totally ready and will be taking the British title home with me.

“It’s not been frustrating having to deal with the opponent change, it was just about adapting to a different style and I’m just excited to get in there and get down to business.

“This camp has been really good. It’s the best I’ve been feeling both physically and mentally coming into any fight in my career, so that is all positive.

“I won’t be underestimating Maxi. I know he’s always training and has been more over active the last year, so I’m expecting a great 12-rounder.”