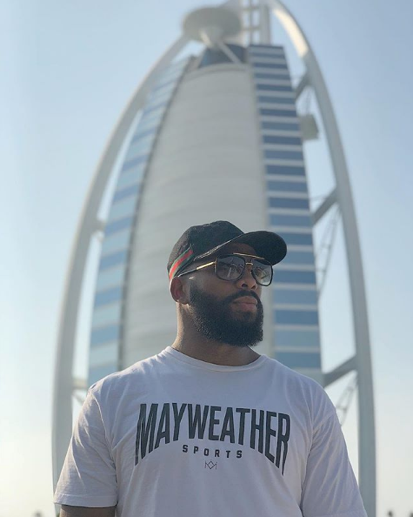 Two-division boxing champion Badou Jack continued to show that he is truly a champion of the entire world as he made an exciting trip to Dubai that included an invitation to participate in the Dubai Fitness Challenge, a meeting with UFC star Khabib Nurmagomedov and much more.

With an invitation from Dubai Tourism, Jack participated in the initiative that encourages UAE nationals, residents and visitors to exercise for at least 30 minutes a day, for 30 consecutive days. A public event gave Jack a chance to further spread his positive messages.

“It was such an honor to be invited to this event that was part of an unforgettable trip,” said Jack. “I’m very thankful to the city of Dubai for letting me talk to people about the importance of staying active. It’s important for me to be able to make an impact all over the world and this was a great opportunity.”

In addition to that invitation, Jack visited with UFC star Khabib Nurmagomedov, fresh off his victory over Conor McGregor last month. The two world champions, who both practice the Muslim faith, met for the first time and discussed a variety of topics, while also touring a local boxing/MMA gym and posing with Jack’s championship belts.

“It was an awesome experience to get to talk with another champion and competitor like Khabib,” said Jack. “I’m a big fan of what he’s able to do in the ring and as a fellow ambassador for the Muslim faith. It was really a fun time talking to him while we were both in Dubai.”

As part of the trip, Jack spoke with Men’s Health Middle East for an article that will run inside the magazine and detail more of the numerous endeavors Jack is currently pursuing both inside and outside of the ring. Jack’s time in Dubai also saw him invited by GQ Middle East as a special guest to the launch event ahead of their inaugural issue.

“I love taking these trips around the world to experience a variety of cultures and also continue to build my brand and give back anywhere that I can make a difference,” said Jack. “Whether it’s Ripper Nutrition, the Badou Jack Foundation or my boxing career, I’m proud to use my platform. I have a lot of goals and dreams in the sport of boxing, but also outside of it. Making these kinds of connections is going to aid me long past my boxing career.”

With more and more recognition being laid upon Jack year after year, the groundswell of worldwide support for “The Ripper” is rising as he prepares to return to the ring in early 2019. Keep an eye out for more news from Jack, including charity events for the upcoming holiday season.