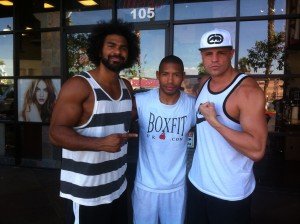 Floyd Mayweather was on very good form this week, sparring between 12 and 15 rounds in a day. He is looking much better than he did for the first fight with Marcos Maidana. He is hitting harder and the unique skills and speed maintain intact. This is a man who has been a professional for 18 years and a champion for 17 of those years.

12am – 6am workouts, really long sessions. Everyone watching Floyd gets tired and is in danger of falling asleep but this man is more than energetic. He works non-stop, pushing himself harder and harder, without limits. I do believe a knock out win is possible this time. Maidana can’t change much of his game plan but Floyd can, and will.

My intense training camp for my fight is now over, so I can for a change sit back, relax and take the time to learn from a modern great. Whilst Floyd is working out he will still find the time to dish out advice to his fighters on what he believes we need to work on to become even better fighters.

His motivational and authentic message to all of us – “I’m with you through the good and the bad times”.

On Saturday we attended the Floyd Mayweather appreciation dinner celebration. We dined outside listening to some of the biggest bands of the 1990s performing live and brilliantly. R & B superstar, Tank, was the host of the event. He did a first class job. I’m pretty sure he could have also been a decent comedian as his side gig if he chose to. Afterwards the celebration continued inside the hotel in Lake Las Vegas.

On Sunday we had a BBQ at a local park, kids had entertainment and The Money Team played baseball against Las Vegas little league team who had just returned from playing in the World Series. It was great fun, with everyone coming together.

Another Floyd Mayweather training camp is coming to an end. One more week to go. He will be missed in the gym, as he won’t be back until next March for his fight in May 2015. The atmosphere is never the same when he isn’t there, but the show must go on, all the fighters continue to work hard to be the best they can be.

Ashley R&B
Next week will see the city of Las Vegas come alive. The fighter arrivals, press conference, fan workout and autograph signing, the weigh in, fight night – all followed by celebration parties around the city.

This is the fifth Floyd Mayweather camp I’ve had the privilege and pleasure to witness first hand, and the third as a member of Mayweather Promotions.

I’m still as impressed, inspired and motivated as I was when I first witnessed him workout back in 2012, when he was preparing for his fight with Miguel Cotto.