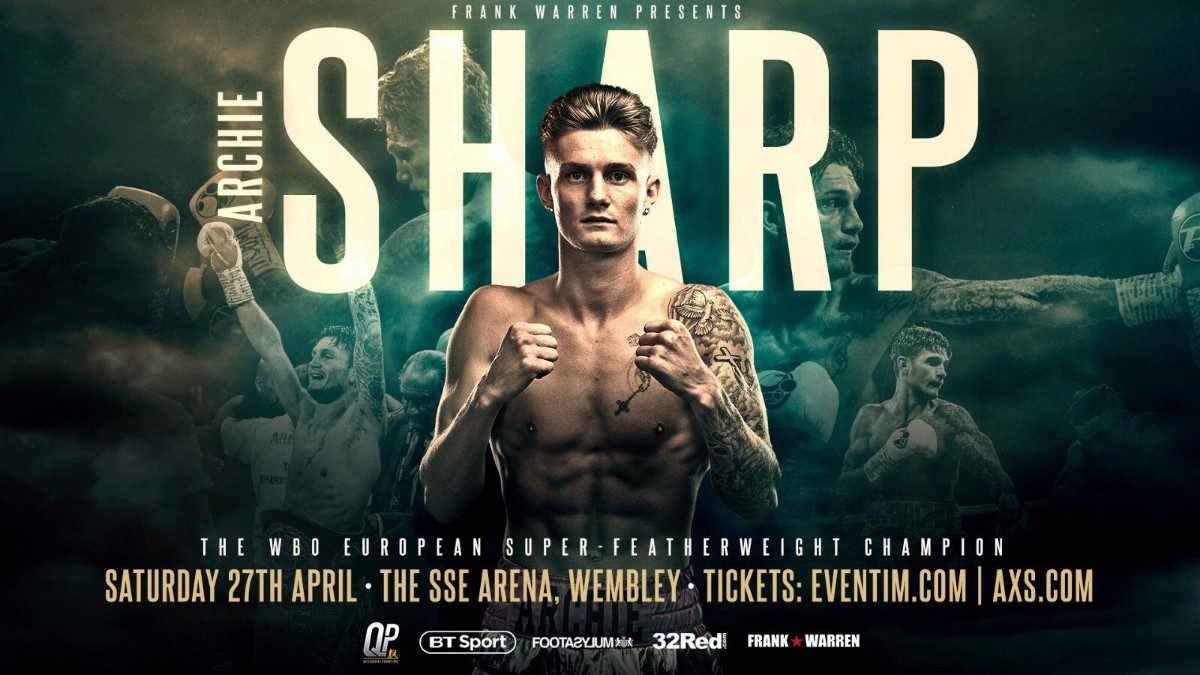 ARCHIE SHARP BELIEVES a fight with the British super featherweight champion, Sam Bowen, is an inevitable encounter that is there to be made.

The WBO European champion Sharp, who de-throned Lyon Woodstock to claim his title back in October, makes a return to the ring on April 27 at the SSE Arena, Wembley, where he will box an eight-rounder to shake off the ring rust after recovering from injury.

His immediate goals, should he emerge unscathed at Wembley, are to defend his title while seeking to expand his belt collection by taking on other champions.
This means Bowen – who also holds the WBO Intercontinental title – fits the bill nicely and Sharp agrees it is a natural match-up.

“Exactly that and the Bowen fight is going to happen,” insisted the Welling-based 23-year-old. “We’re both unbeaten, we’re both with Frank (promoter, Warren) and we’re both top prospects.

“So that fight is going to happen. When it is going to happen I am not too sure, but it will go ahead in the future. I saw an interview where they were talking about Scott Quigg, so they are chucking names about trying to go for something bigger.

“I’ve got names I would like to look at as well like Lee Selby and Sam Bowen is amongst those names too, so we will see what happens.”

Sharp knows full well that stepping in with Bowen would represent a step up from his 14 previous opponents, but his confidence and self-belief has been infused by the recording of such an accomplished victory over Woodstock on away turf in Leicester.

“Great fighter, I am a great fighter too, so it will make a great fight. One hundred per cent it is a clash of styles, he is a very strong fighter and I am a very classy fighter. At the end of the day I feel like it would be the Woodstock fight all over again.

“I know he is stronger than Woodstock, but I am getting stronger every day.”

Also present on the super featherweight landscape is Zelfa Barrett – soon to return after injury – and Woodstock, who registered a comeback win in March.
Both are bidding to make a return to title contention but, in the opinion of Sharp, they are currently lagging behind with the also-rans and would need to bring something to the table before he would consider them a viable opponent.

“Yes, I don’t even particularly want to mention their names. I know Lyon is out there trying to get a rematch, but they are both beaten fighters so why don’t they box each other and do what they’ve got to do.

“Once they start winning belts they can get in the mix with us.”